Sam Ehlinger passed for an early touchdown, then ran for two more in the second half to lead Texas to a 27-16 win over Baylor on Saturday that snapped the Longhorns’ two-game losing skid.

After the game, Texas players stayed on the field for “The Eyes of Texas” school song that had been embroiled in controversy. And while some flashed the traditional “Hook’em” hand sign during the song, many didn’t.

Ehlinger set up Texas’ first touchdown with a 42-yard completion on a leaping catch by Joshua Moore. Those two connected again on a 3-yard scoring pass that put Texas ahead 13-3 at halftime. 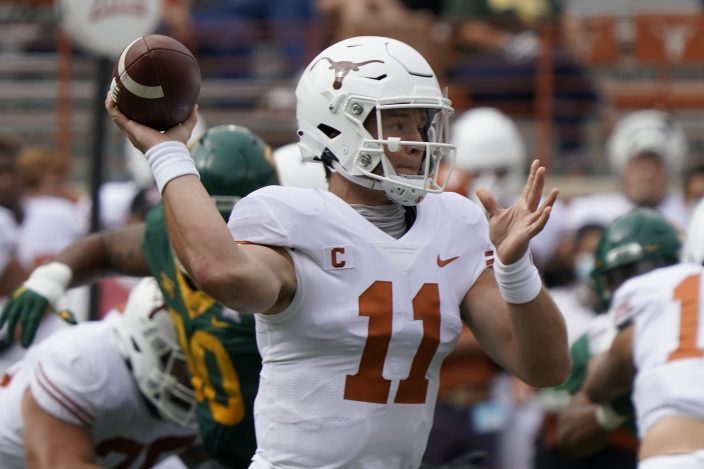 Texas' Sam Ehlinger (11) looks to pass against Baylor during the first half of an NCAA college football game in Austin, Texas, Saturday, Oct. 24, 2020. (AP PhotoChuck Burton)

Texas (3-2, 2-2 Big 12) went ahead 20-3 with a punishing 75-yard drive to open the third quarter, mixing in runs with freshman Bijan Robinson in his first career start, before a Baylor pass interference penalty set up Texas inside the Baylor 5. Ehlinger then powered in from 1-yard out.

Ehlinger scored again in the third when he rolled to his right before taking off for the end zone and splitting two defenders near the goal line. It was his seventh rushing touchdown on the season to go with 17 touchdown passes.

“Winning is very important, we had a bad taste in our mouth the last two weeks,” Ehlinger said, with a nod to the Texas defense that played its best game of the season. “I think we’ve showed we are capable of anything ... and that’s good or bad. When we stay out of our own way, we’re pretty darn good.” 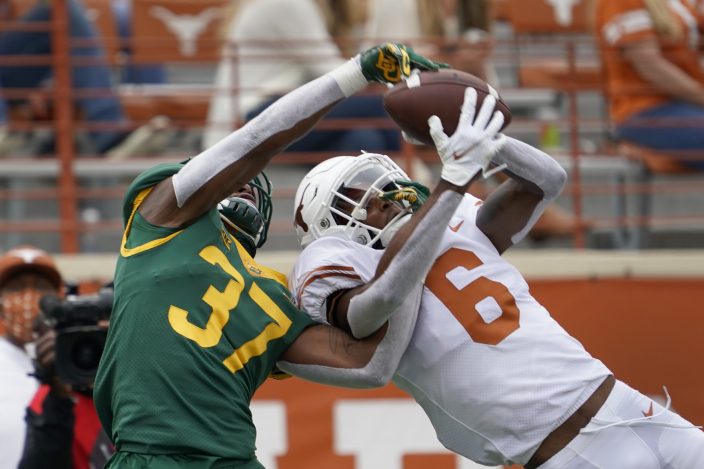 Baylor's Mark Milton (37) knocks the ball away from Texas' Joshua Moore (6) during the first half of an NCAA college football game in Austin, Texas, Saturday, Oct. 24, 2020. (AP PhotoChuck Burton)

Baylor (1-2, 1-2) hadn’t played since Oct. 3 and had to shut down its football program for 10 days because of a coronavirus outbreak on the roster. The Bears looked rusty on offense with struggles in pass protection and quarterback Charlie Brewer nearly throwing three first-half interceptions. Brewer finished with 256 yards and two late touchdown passes.

After forcing a turnover on downs in the final minutes, Texas ran out the clock near the Baylor goal line. When Ehlinger took a knee on the final snap, all focus turned to what would happen with the song and whether the Longhorns would stay on the field.

The Texas campus has been swept in a months-long controversy over the song as some players have refused to sing it because of links to racist elements in the school’s past. Most of the team left the field before the song after Texas’ first two home games and again in Dallas when Texas lost to Oklahoma, angering some fans. 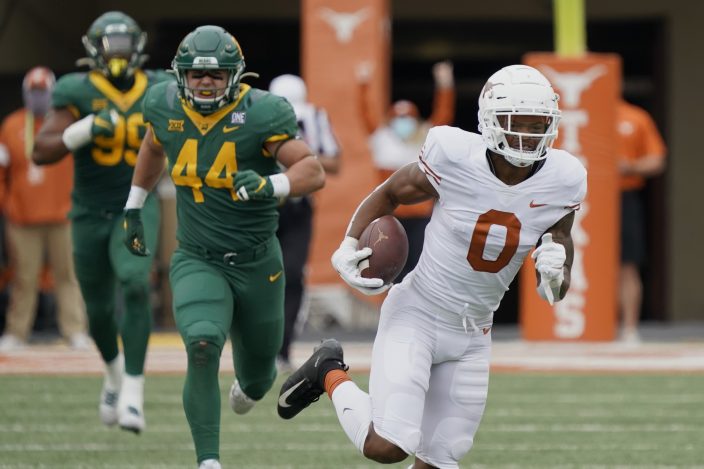 Texas' Tarik Black (0) runs after a catch as Baylor's Dillon Doyle (44) pursues during the first half of an NCAA college football game in Austin, Texas, Saturday, Oct. 24, 2020. (AP PhotoChuck Burton)

“When it comes to the team, within the team, my honest opinion was it wasn’t an issue,” Graham said. “But hopefully we can all put this behind us and we can move forward and just focus on ball.” 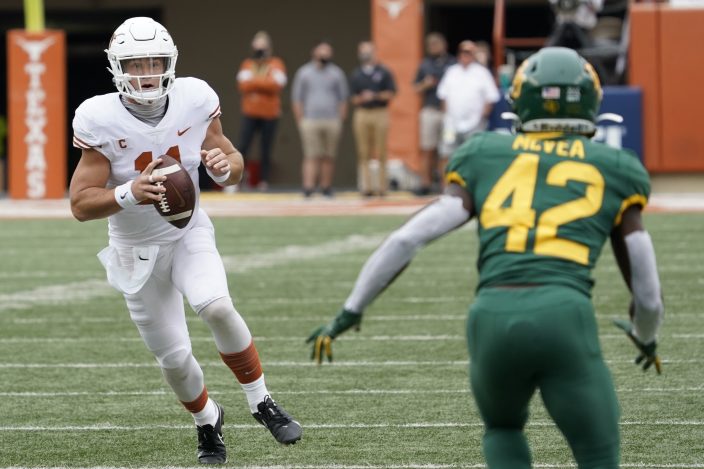 Baylor: First-year coach Dave Aranda’s defense was good early but eventually broke without getting much help from a struggling offense until late. Brewer and the Bears finally hit their stride in a desperate bid to rally in the fourth quarter. But even that needed a big play from the defense with an interception that set up a short field for a late touchdown.

“I feel in the second half we came out and let it rip and played no holds barred football,” Bears wide receiver Gavin Holmes said. “Going forward that’s what we need to do from the beginning, play with nothing holding us back.”

Texas: The Longhorns avoided their first three-game losing streak under fourth-year coach Tom Herman, who spent the last two weeks trying to deflect fan anger over the recent losses and the school song. The Longhorns best defensive effort under new coordinator Chris Ash held Baylor to 316 total yards. And unlike the previous three games, this one didn’t require Ehlinger to engineer a frantic fourth-quarter comeback.

Moore now has six touchdown receptions in five games and has produced some of the biggest plays of the season for the Longhorns. His big grab in coverage in the second quarter ignited the Texas offense.

“When the ball’s in the air, it’s my ball,” Moore said. “I appreciate Sam for trusting me the way he does.”