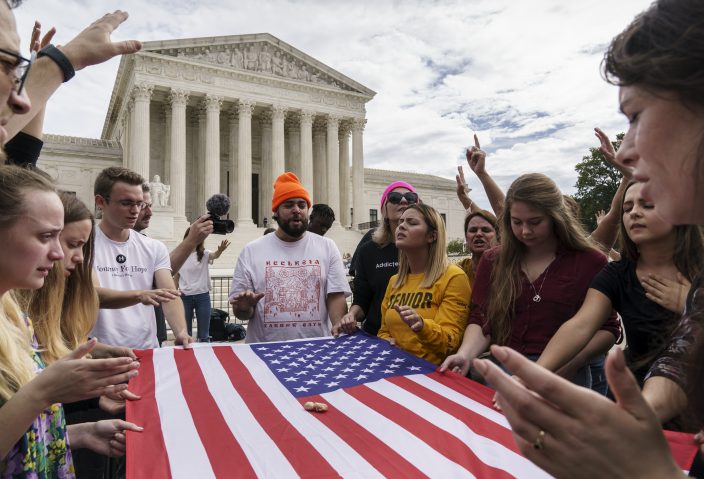 With a small plastic fetus on an American flag, evangelical Christians pray outside the Supreme Court as Republicans in the Senate work in a rare weekend session to advance the confirmation of Judge Amy Coney Barrett for the high court, in Washington, Saturday, Oct. 24, 2020. (AP PhotoJ. Scott Applewhite)

ELECTION 2020 -- President Donald Trump assured supporters packed shoulder to shoulder at weekend rallies that “we’re rounding the turn” on the coronavirus and mocked challenger Joe Biden for raising alarms about the pandemic, despite surging cases around the country and more positive infections at the White House. By Jill Colvin, Will Weissert, Zeke Miller and Aamer Madhani. With AP Photos. SENT: 1200 words. With: VIRUS OUTBREAK-PENCE -- Vice President Mike Pence plans to maintain an aggressive campaign schedule this week despite his exposure to a top aide who tested positive for the coronavirus, the White House said Saturday. By Jill Colvin and Zeke Miller. SENT: 700 words. 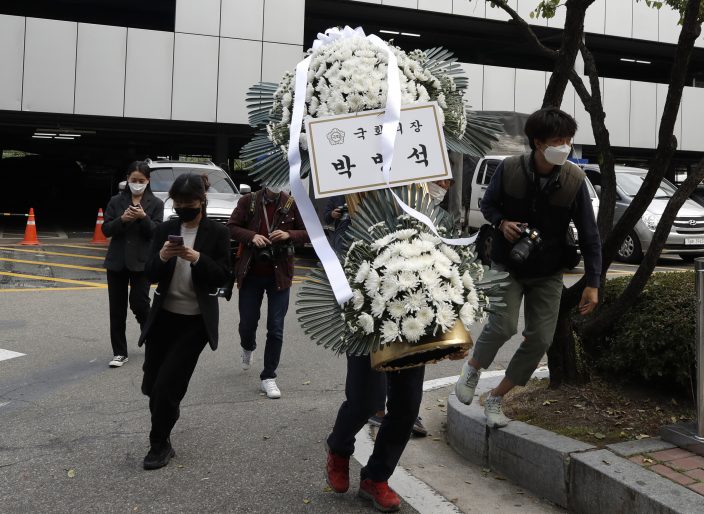 A man carries a wreath of flowers from South Korea's National Assembly Speaker Park Byeong-seug, for the funeral of the late Samsung Electronics chairman Lee Kun-Hee outside a funeral hall, in Seoul, South Korea, Sunday, Oct. 25, 2020. Lee, the ailing Samsung Electronics chairman who transformed the small television maker into a global giant of consumer electronics, has died. He was 78. (AP PhotoLee Jin-man)

VIRUS OUTBREAK — The coronavirus pandemic is surging across Europe with renewed force and, with winter coming, its restaurant industry is struggling. The spring lockdowns were already devastating for many, and now a new set of restrictions is dealing a second blow. Some governments have ordered restaurants to closed. Others have imposed restrictions like curfews and social distancing curtailing how they operate. More than just jobs and revenue are at stake — restaurants lie at the heart of European life. SENT: 1,000 words, photos. By Raf Casert. WITH: VIRUS OUTBREAK-VACCINE — AstraZeneca and Johnson & Johnson announce U.S. regulators have given them the go-ahead to resume U.S. testing of their COVID-19 vaccine candidates.

AFGHANISTAN — Afghanistan is claiming it has killed a top al-Qaida propagandist on an FBI most-wanted list during an operation in the country’s east. The reported killing of Husam Abd al-Rauf risks threatening peace talks between the Taliban and the Afghan government. It also threatens to plunge this nation beset by decades of war into further chaos as the U.S. works to withdraw its forces. By By Rahim Faiez, Tameem Akhgar, Jon Gambrell. SENT: 750 words, photos.

MISSING MOTHER-CONNECTICUT — The former home of Jennifer Dulos, the Connecticut mother of five who prosecutors say was killed by her estranged husband last year, is going on the market for $1.75 million. SENT: 250 words, photo.

VIRUS OUTBREAK-CHURCH CLOSING — A North Carolina health official has ordered a large church to close its doors temporarily because of concerns it is helping to spread the coronavirus by disregarding social distancing measures. SENT: 210 words.

TURKEY-GAS EXPLORATION — Turkey says it is extending a gas exploration mission in the eastern Mediterranean that has caused tensions with Greece in recent months. SENT: 170 words.

FACEBOOK-TARGETED-AD-TOOL — Academics, journalists and First Amendment lawyers are rallying behind New York University researchers in a showdown with Facebook over its demand that they halt the collection of data showing who is being micro-targeted by political ads on the world’s dominant social media platform. SENT: 590 words, photos.

VIRUS OUTBREAK-INDIA FESTIVALS — Weeks after India fully opened up from a harsh lockdown and began to modestly turn a corner by cutting new infections by near half, a Hindu festival season is raising fears that a fresh surge could spoil the hard-won gains. Health experts worry the festivals can set off a whole new cascade of infections, further testing and straining India’s battered health care system. SENT: 740 words, photos.

VIRUS OUTBREAK-ASIA — A COVID-19 outbreak in the north of Melbourne has led health authorities in Australia’s Victoria state to hold off on any further easing of restrictions in the beleaguered city. Victoria Premier Daniel Andrews withheld any announcement on an easing on Sunday as the state awaits results on 3,000 people who were tested in the city’s north in the past 24 hours. SENT: 600 words, photos.

VIRUS OUTBREAK-CHURCH CLOSING — A North Carolina health official on Saturday ordered a large church to close its doors temporarily because of concerns it is helping spread the coronavirus by disregarding social distancing measures. SENT: 210 words.

ELECTION 2020-TEXAS-EARLY VOTE -- Ten days before Election Day, Texans have already cast as many early votes as they did in 2016 and are nearly 80% of the way toward hitting the total — both early and on Election Day — counted four years ago. The voting bonanza has some Democrats optimistic that decades of low turnout and undisputed Republican dominance may soon be a thing of the past. By Paul Weber. With AP Photos. SENT: 980 words.

FACT CHECK WEEK — The past week in U.S. politics featured the final debate of the presidential campaign, and an AP Fact Check examined the rhetoric and found a variety of falsehoods and flubs. President Donald Trump declared that the pandemic is winding down, in stark contrast to the rising infections, hospitalizations and deaths from the coronavirus. Democrat Joe Biden asserted that he never called for fracking to be banned. In fact he did, back during a primary debate when he misstated his actual position. By Hope Yen and Calvin Woodward. SENT: 1,910 words, photos. Find AP Fact Checks at https://apnews.com/APFactCheck

TANZANIA ELECTION-PREVIEW — Tanzania’s opposition faces a new obstacle in its quest to unseat President John Magufuli in Wednesday’s election: It says the government has made it difficult to accredit thousands of opposition electoral observers who want to ensure the vote is fair. SENT: 990 words, photos.

SKOREA-OBIT-SAMSUNG CHIEF — Lee Kun-Hee, the ailing Samsung Electronics chairman who transformed the small television maker into a global giant of consumer electronics, has died. He was 78. A Samsung statement says Lee died on Sunday with his family members, including his only son and de facto company chief Lee Jae-yong, by his side.SENT: 1,060 words, photos.

ISRAEL-UAE — Israeli Prime Minister Benjamin Netanyahu appears to have confirmed that Israel has given its consent for the United States to sell F35 fighter jets to the United Arab Emirates following a recent agreement establishing diplomatic relations between the Mideast countries. SENT: 350 words, photo.

VOTING MACHINES-GEORGIA — A federal appeals court has temporarily halted a lower court’s order that said every polling place in Georgia must have at least one updated paper backup of the electronic pollbooks that are used to check voters in. SENT: 640 words.

CALIFORNIA-WILDFIRES — California, which has endured its worst wildfire season in history, is bracing for the most dangerous winds of the year, a forecast that prompted the largest utility to announce plans to cut power Sunday to nearly 1 million people to guard against its equipment sparking new blazes. SENT: 950 words, photos.

POLICE-SHOOTING-ILLINOIS — A Black woman who was shot and wounded inside a vehicle by a police officer who also fatally shot her 19-year-old boyfriend told about 200 people gathered at an emotional rally in suburban Chicago that she’s fighting to be there for her son. SENT: 840 words, photos.

TROPICAL WEATHER — The National Hurricane Center reports that Tropical Storm Zeta has formed off the coast of Cuba near the Yucatan Peninsula. According to a Colorado State University hurricane researcher it is the earliest named 27th Atlantic storm recorded. SENT: 270 words.

BBO--WORLD SERIES — The Tampa Bay Rays have gotten even in the World Series after a wild game-ending play for an 8-7 win in Game 4 over the Los Angeles Dodgers. Brett Phillips hit an RBI single off Kenley Janasen with two outs in the ninth, and Randy Arozarena scored the second run on the play because of Dodgers misplays. By Baseball Writer Stephen Hawkins. SENT: 1280 words, photos.

FBC--T25-IOWA STATE-OKLAHOMA STATE — Spencer Sanders passed for 235 yards and ran for 71, and No. 6 Oklahoma State defeated No. 17 Iowa State 24-21. Sanders had been out since injuring his right ankle in the season-opener against Tulsa. Chuba Hubbard ran for 139 yards and a touchdown for Oklahoma State. By Cliff Brunt. SENT: 910 words, photos.