House Speaker Nancy Pelosi says she’s not giving up on passing another coronavirus relief economic package before the Nov. 3 election. 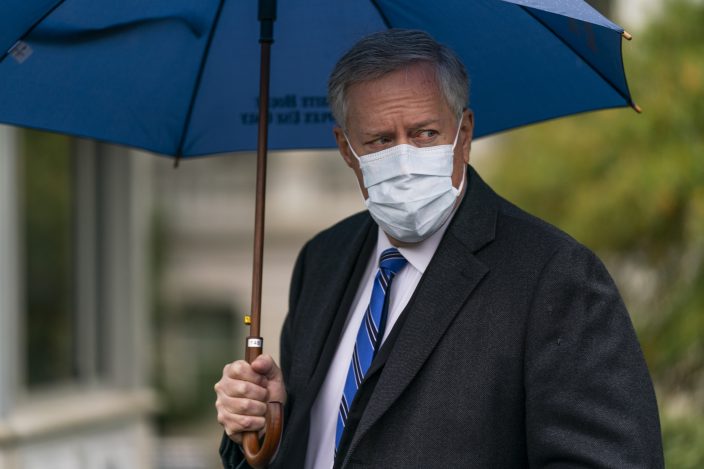 At issue is a huge virus relief bill that would send another $1,200 direct payment to most Americans, restart bonus unemployment benefits, fund additional testing and vaccines, provide aid to schools and allocate money to state and local governments, a Democratic priority.

Pelosi says she sent the administration a list of concerns on Friday and she is told that she’ll have answers on Monday.

Pelosi says she wants a relief bill that is predicated on steps that science dictates should be taken to deal with the coronavirus, and “if we don’t, we’re just giving money to the president to spend any way he wants and that has not been in furtherance of crushing the virus.”

Pelosi spoke on CNN. Earlier, White House Chief of Staff Mark Meadows says the administration has made many offers, but Pelosi “continues to move the goalposts.”

Meadows says the relief bill being negotiated would cost about $1.9 trillion. He says he has a commitment from Senate Majority Leader Mitch McConnell to bring a bill to the floor if negotiations with Pelosi conclude successfully.

The White House chief of staff says that Vice President Mike Pence is continuing to participate in campaign rallies despite his exposure to a top aide who tested positive for COVID-19 because “he’s not just campaigning, he’s working.”

Chief of Staff Mark Meadows says that he spoke with Pence overnight and that the vice president told him he is wearing a mask and social distancing, except when he is speaking at a rally. Meadows says “he’s wearing a mask as it relates to this particular thing because the doctors have advised him to do that.”

Meadows spoke on CNN and was also pressed on whether he sought to quash news of an outbreak among close advisers to Pence. Meadows says “sharing personal information is not something that we should do, not something that we do actually do, unless it’s the vice president or the president, or someone that’s very close to them where there is people in harm’s way.”

Pence himself tested negative, his office said. Under Centers for Disease Control and Prevention criteria, the vice president is considered a “close contact” of his chief of staff, Marc Short, but will not quarantine.

Thousands of supporters have been attending President Donald Trump’s campaign rallies in the final weeks of the presidential election. Meadows says the campaign offers masks to attendees but does not require them to wear it “because we live in a free society.”

President Donald Trump and his Democratic challenger, Joe Biden, are framing their closing messages in the sprint to the Nov. 3 election. Trump plans stops Sunday in New Hampshire and Maine. Biden has events in Georgia.

— Four years in, Trump has plenty of unfinished business

— As Trump casts doubt on election, new agency contradicts him