British police and coast guard units responded Sunday to an incident aboard an oil tanker in the English Channel. The ship's owner attributed the problem to stowaways and said it was not a hijacking.

The incident occurred on the Libyan-registered tanker Nave Andromeda, which had been scheduled to dock at the port of Southampton on Sunday morning.

Pat Adamson, a spokesman for the ship's owner, Navios Maritime Acquisition Corp., described the situation as a “security incident" involving stowaways and said the tanker was not hijacked. It will be up to the authorities to comment further, he said. 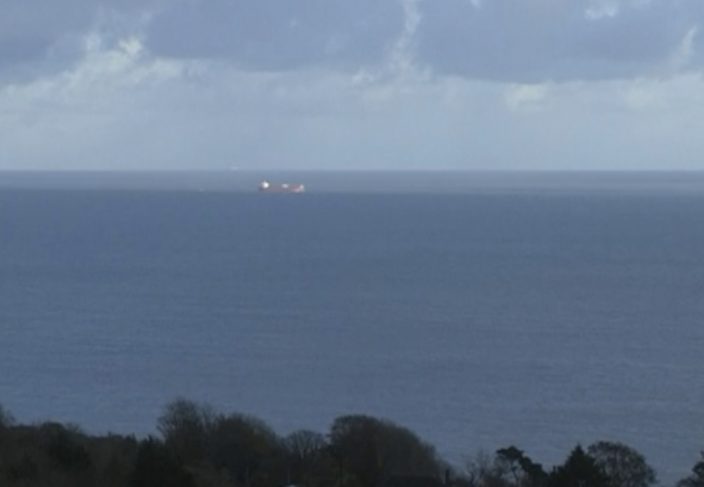 In this image taken from SKY video, shows a tanker at sea, as filmed from land on Sunday Oct. 25, 2020. British police are investigating an undisclosed incident aboard an oil tanker in the English Channel. The incident reportedly took place aboard the Libyan-registered oil tanker Nave Andromeda south of Sandown on Isle of Wight, according to Isle of Wight Radio. (SKY News via AP)

“We are aware and dealing with an ongoing incident on board a vessel which is situated south of the Isle of Wight,″ Hampshire police said in a statement. “We will provide you with further updates when we are in a position to do so.”

Two coast guard helicopters responded to the incident, and authorities set up an exclusion zone around the tanker.

The Nave Andromeda left Lagos, Nigeria, on Oct. 6 and had been expected to dock in Southampton, England, at 10.30 a.m. Sunday, according to ship tracking website MarineTraffic.com. The tanker has been circling an area about 5 miles southeast of Sandown on the Isle of Wight for the last few hours, tracking data shows.

Chris Parry, a retired rear admiral in the Royal Navy, told the BBC that based on the available information, he suspects the stowaways ignored the crew's directions as the ship neared port, and the crew retreated to a secure area of the ship known as “the citadel" to retain control of the vessel.

“My guess is, they've got some rogue elements running around the ship," Parry said. “They don't want to go into shallow waters until they've secured those people. That's a really prudent thing to do."

Bob Seely, who represents the Isle of Wight in Parliament, said the British government was likely to convene a meeting of its emergency committee to discuss its response. Trouble on the ship is of particular concern because of the tanker's cargo and because the vessel started out from West Africa, he said.

“I suspect, because of the nature of this, it will be treated as marine counter-terrorism," Seely told Sky News. “The number of people in the U.K. who do that are very limited, and the relevant units will be looking at options, no doubt, as to what we could be doing.”

The Home Office, which is responsible for law enforcement and immigration in the U.K., said it was aware of the incident.

The U.K. Chamber of Shipping said it was “in contact with the relevant authorities."

“We believe it is likely to be related to stowaways onboard but are awaiting more information,” the trade association said in a statement.