Paraguayan officials say workers have discovered the remains of seven people — apparently would-be migrants — in a shipment of fertilizer from Serbia.

Three of the men were Moroccan and one was from Egypt, the chief investigfator, Marcelo Saldivar, told The Associated Press on Saturday. The other three had not yet been identified.

Investigators said the shipment left Serbia along rivers on July 22 and the migrants apparently had hoped to get off at some point along the trip, which wound up in the South American nation. 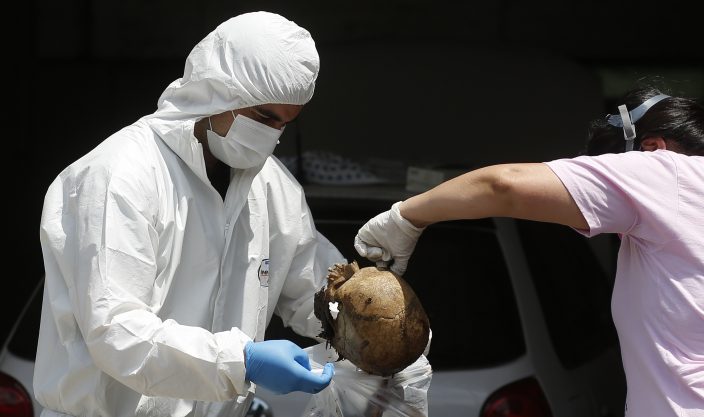 EDS NOTE: GRAPHIC CONTENT - Forensic police investigators hold a skull as they collect human remains from a container sitting in a street outside an office building in Asuncion, Paraguay, Friday, Oct. 23, 2020. According to prosecutor Marcelo Saldivar, seven bodies were found in the container, holding fertilizer, that left Serbia in July and arrived at Paraguay's Terport de Villeta port in October. (AP PhotoJorge Saenz)

“Indications are that they were people who ventured to transport themselves by means of the container ship and died inside. They might have died from starvation, lack of oxygen or perhaps some illness,” Saldivar said in a statement.

“When the container was opened, we sensed a bad odor" and summoned the police," said the vessel's owner, Vernon Rempel Baerg.