Ben Roethlisberger threw two touchdown passes to Diontae Johnson, and the Pittsburgh Steelers remained perfect by holding off Tennessee for a 27-24 victory Sunday in a game originally postponed when the Titans came down with the NFL’s first COVID-19 outbreak of the season.

In a matchup of the AFC’s two remaining undefeated teams, the Titans rallied from 17 down. They failed to complete the comeback when Stephen Gostkowski, who made a 51-yarder earlier, missed from 45 yards wide right with 14 seconds left. That sent the Steelers running around the field in celebration and the Titans (5-1) stunned.

The Steelers improved to 6-0 for their best start since 1978, when Pittsburgh won its first seven on the way to the Super Bowl. This was just the fifth time undefeated teams had met in Week 7 or later, and the winner of the previous four all made the Super Bowl. 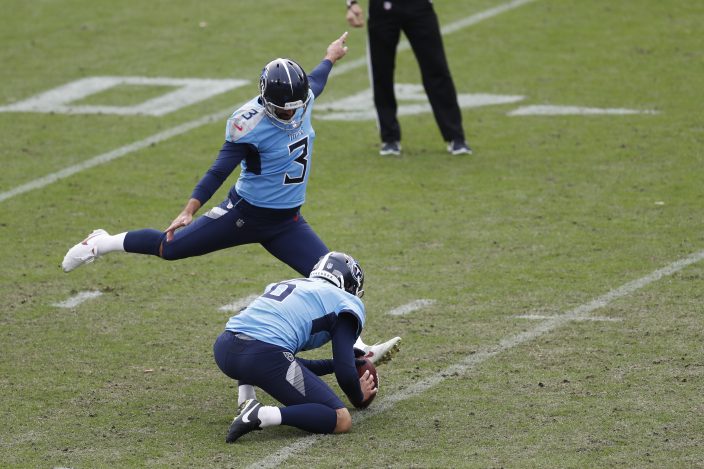 Benny Snell Jr. added a 1-yard TD run and Ray-Ray McCloud set up a touchdown with a 57-yard punt return.

Pittsburgh outgained Tennessee 362-292 and held the NFL’s second-best scoring offense under 31 points for the first time since the opening week of the season.

But the Titans had won four of their first five by rallying in the final two minutes of regulation or overtime, and they scored 17 straight to pull within 27-24.

Ryan Tannehill hit A.J. Brown on a short pass that the receiver took to the end zone for a 73-yard TD. Jayon Brown picked off a batted pass, setting up Gostkowski’s field goal. Derrick Henry capped a 12-play drive with a 1-yard TD with 10:13 left.

The Titans had their final chance after Amani Hooker intercepted Roethlisberger in the back of the end zone with 2:35 left. It was Roethlisberger’s third of the game, which Tennessee turned into only a field goal.

Detroit let Atlanta score a touchdown. It worked — and the Falcons found another stunning way to lose.

Matthew Stafford connected with T.J. Hockenson on an 11-yard touchdown pass as time expired and Matt Prater booted a 48-yard extra point to give Detroit the improbable victory. The Lions (3-3) won their second in a row — their first winning streak since early in the 2019 season.

Trailing 16-14, the Falcons (1-6) were positioned to run down the clock and kick a chip-shot field goal for the win when they picked up a first down at the Lions 10 with just over a minute remaining.

Detroit had used up all its timeouts on the drive, so there was no further way to stop the clock. Knowing their only chance was to allow a quick TD, the Lions made no attempt to stop Todd Gurley after he took a handoff from Matt Ryan.

Gurley realized what the Lions were doing — but too late. He started to fall but landed on the goal line with 1:04 remaining.

The Falcons converted a 2-point conversion to make it 22-16, but the Lions still had a chance against a team that had already become the first in NFL history to lose two straight games when leading by at least 15 points in the fourth quarter.

Stafford drove his team 75 yards in eight plays. Detroit spiked the ball with 2 seconds to go, setting up the final play. Stafford was pressured in the pocket, rolled to his left and spotted Hockenson breaking free across the end zone.

Baker Mayfield overcame a terrible start to throw for five touchdowns, including a 24-yard go-ahead score to Donovan Peoples-Jones with 15 seconds left, and Cleveland outdueled Cincinnati.

Nursing sore ribs, Mayfield started 0 for 5 — including an interception on his first attempt of the game. He then completed 22 of his next 23 passes. The last was the leaping grab by People-Jones to win it for the Browns (5-2).

Cincinnati rookie Joe Burrow played another terrific game, but again it wasn’t enough. He hit 35 of 47 passes for a season-high 406 yards and three touchdowns, including a 3-yard scoring pass to Giovani Bernard on fourth-and-1 to give the Bengals a 34-31 lead with 1:06 left.

But the Bengals couldn’t stop Mayfield, who was roundly criticized after a poor performance in Cleveland’s loss to Pittsburgh last week, and Browns receivers who made some great catches as they worked down the field.

Mayfield was 22 for 28 for 297 yards. Rashard Higgins had six catches for 110 yards, and tight end Harrison Bryant had two touchdown catches.

Drew Brees passed for 287 yards and two touchdowns without two top receivers and rushed for another score to lead New Orleans past Carolina.

The Panthers had driven across midfield in the final minutes when Marcus Davenport’s sack of Teddy Bridgewater led coach Matt Rhule to send out kicker Joey Slye for a 65-yard field goal on fourth-and-19. The kick fell just short of the crossbar and the Saints (4-2) ran out the final 1:55 to send the Panthers (3-4) to their second straight loss.

Brees completed 29 of 36 passes to eight targets despite not having receivers Michael Thomas (hamstring) and Emmanuel Sanders (COVID-19) in the lineup. His decision-making and accuracy also helped New Orleans convert 12 of 14 third downs.

On their only two third-down failures, Wil Lutz came through with field goals of 41 and 43 yards.

Alvin Kamara gained 148 yards from scrimmage, with 83 coming on 14 rushes.

That was just enough to overcome a strong showing by Bridgewater in his first game against the Saints since serving as Brees’ backup in New Orleans the past two seasons.

Bridgewater was 23 of 28 for 254 yards and two touchdowns, including a 74-yarder to DJ Moore, who also had a 7-yard catch-and run around the right end for a score.

Rodgers played a near-flawless game and tied his season high for TD passes. The performance came after he threw two interceptions, including one that was returned for a touchdown, with no TDs in a 38-10 loss to Tampa Bay last week.

Despite being without leading rusher Aaron Jones and left tackle David Bakhtiari, Green Bay (5-1) had no trouble handling the woeful Texans (1-6). The Packers built a 21-0 lead by halftime.

Green Bay’s strong day on offense was aided by a career-high 196 yards receiving by Davante Adams, who had touchdown receptions of 3 and 45 yards.

Green Bay made it 35-13 when Jamaal Williams scored on a 1-yard run with about four minutes to go.

Deshaun Watson threw a 6-yard touchdown pass to Will Fuller with about 90 seconds left before the Texans recovered an onside kick. But David Johnson fumbled after a reception on the next play and the Packers ran out the clock.

Washington’s defense finally clamped down on a struggling opponent, piling up six sacks, an interception and a forced fumble that became a safety in a 25-3 blowout of Dallas on Sunday that snapped a five-game skid.

Montez Sweat had two sacks for Washington (2-5), Cole Holcomb had one to go along with a red zone interception and Landon Collins knocked the ball out of Andy Dalton’s hands for an early safety before leaving with an ankle injury. Dalton was under siege all day behind a patchwork offensive line before being knocked out of the game in the third quarter on a shoulder-to-head hit from Jon Bostic, who was ejected.

Dalton was 9 of 19 for 75 yards before being injured and walking off under his own power to undergo concussion evaluation.

Washington allowed 142 total yards to win a game by double digits for the first time since November 2018.

A dominant defensive performance combined with rookie Antonio Gibson’s first 100-yard rushing game and a touchdown and a well-managed game by Kyle Allen were enough to put Washington back in the thick of the race in the dreadful NFC East.

Allen was 15 of 25 for 194 yards with TD passes to Terry McLaurin and Logan Thomas in his third consecutive start since taking over as starting quarterback.

Josh Allen and the Bills were held out of the end zone for the first time this season, but Tyler Bass tied a franchise record with six field goals and Buffalo ended a two-game skid by beating winless New York.

It was the third game in 13 days for the Bills (5-2), who lost to Tennessee and Kansas City before their ugly win against the league-worst Jets (0-7).

The Bills fell behind 10-0 early and looked sluggish for most of the game, and the victory marked their first without getting a touchdown since they beat Washington 17-16 in 2007 on five field goals by Rian Lindell and a safety.

It was also the first time the Jets lost without giving up a touchdown since a 9-6 loss to the Rams in 2016.

New York had a chance late after Micah Hyde was called for an unnecessary hit on Breshad Perriman, who appeared unconscious for a few moments. But Sam Darnold was intercepted by Jerry Hughes on a tipped pass to seal it.