When Michael Schumacher retired from Formula One eight years ago, little did he know that he was opening the door for Lewis Hamilton to make history.

The British driver did just that on Sunday, winning the Portuguese Grand Prix for a record-setting 92nd victory of his outstanding career to overtake Schumacher's 91 wins. Runaway leader Hamilton is also set to equal Schumacher’s record seven championships this season.

Hamilton replaced Schumacher at Mercedes in 2013 with only one F1 title to his name and 70 wins behind the German great's mark which was considered in F1 circles as way out of reach. 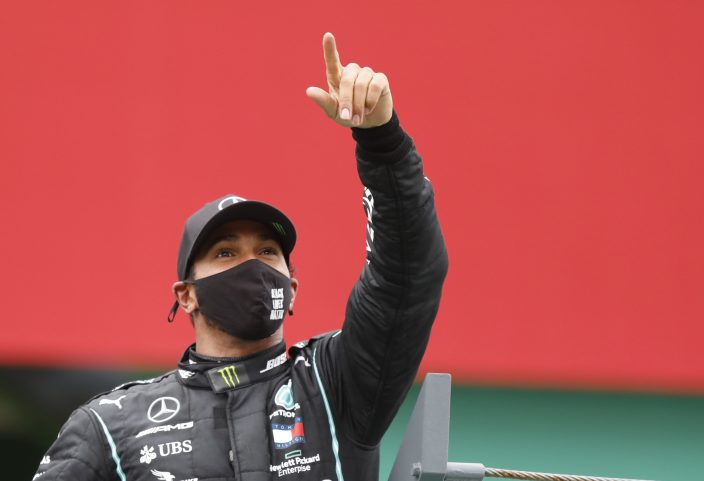 But with another contract looming at Mercedes, the 35-year-old Hamilton could get well beyond 100 wins.

“I still feel physically strong but you still wonder when is it going to tip over and (you) lose performance,” Hamilton said after his victory in Portugal. “But showing by today it’s not yet.” 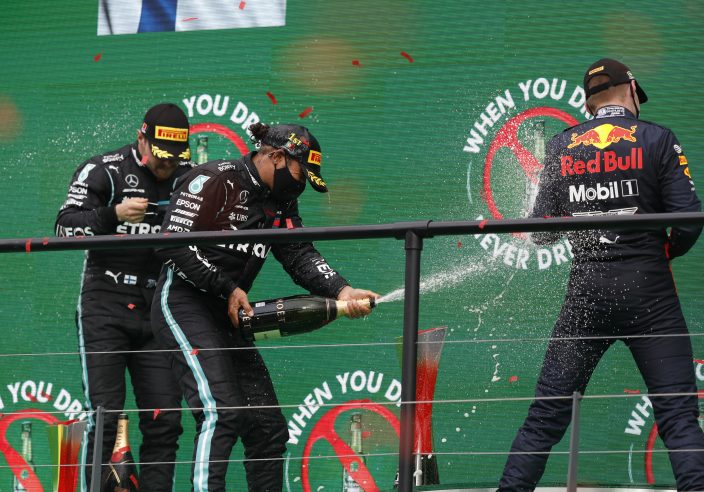 But direct comparisons between the two are difficult since they raced in different eras, save for an overlapping period of three seasons when Schumacher was driving an uncompetitive Mercedes.

Who has the edge in terms of single-lap speed is hard to judge. 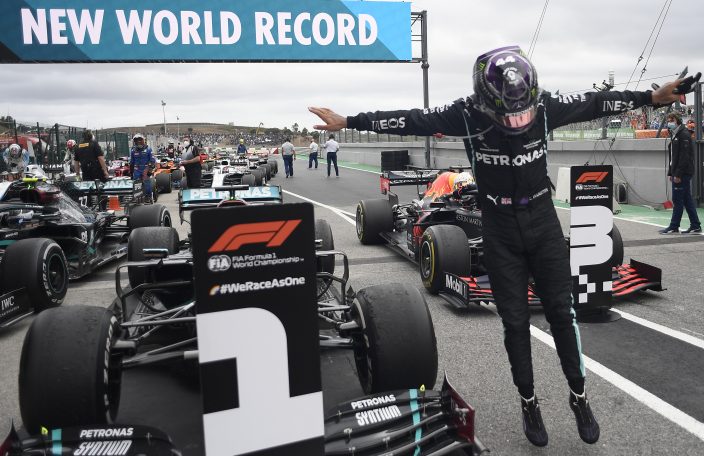 Mercedes driver Lewis Hamilton of Britain jumps out of his car after his record breaking win during the Formula One Portuguese Grand Prix at the Algarve International Circuit in Portimao, Portugal, Sunday, Oct. 25, 2020. (Jorge Guerrero, Pool via AP)

Some of Hamilton's poles have been among the best ever in F1. Particularly the display at the Singapore GP two years ago and the mesmerizing control at a rain-drenched qualifying for the Styrian GP in July. 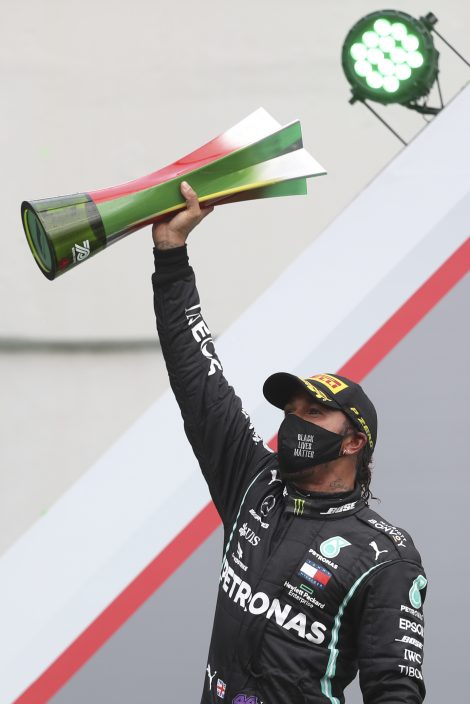 Mercedes driver Lewis Hamilton of Britain holds his trophy on the podium after his record breaking win during the Formula One Portuguese Grand Prix at the Algarve International Circuit in Portimao, Portugal, Sunday, Oct. 25, 2020. (Jose Sena Goulao, Pool via AP)

Ferrari driver Kimi Raikkonen won the title that year by one point from Hamilton, who began with nine straight podiums and a first victory in Canada after clinching a first pole.

McLaren sent Hamilton a tweet on Sunday featuring a bottle of Champagne and the words “You never forget your first.”

When he won his first title the following year, aged 23, Hamilton was the youngest world champion until Sebastian Vettel in 2010. 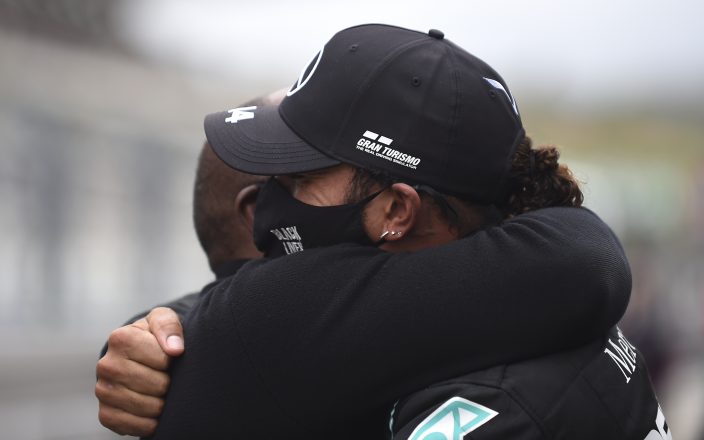 Mercedes driver Lewis Hamilton of Britain, right, is congratulated by his father Anthony Hamilton after his record breaking win at the Formula One Portuguese Grand Prix at the Algarve International Circuit in Portimao, Portugal, Sunday, Oct. 25, 2020. (Jorge Guerrero, Pool via AP)

In an extraordinary scenario, Hamilton won the 2008 championship by overtaking on the last corner of the Brazilian GP to finish fifth and beat Ferrari's Felipe Massa by one point. The Italian team was celebrating wildly when Hamilton surged to break hearts at Massa's home race.

The next four years saw Red Bull's dominance with four Vettel titles from 2010-13.

He joined his old friend from junior karting, Nico Rosberg, at Mercedes. Observers questioned the move and in 2013 Hamilton won only one race while Vettel finished the season with 13.

“Did I think we would win this many races? Of course not,” Hamilton said Sunday about his Mercedes move.

By the end of 2013, Vettel loomed as the biggest threat to Schumacher's records. The German driver is 2 1/2 years younger than Hamilton and, back then, led 4-1 in titles and 39-22 in wins.

But then another key moment happened as F1's engines changed, with the arrival of the 1.6-litre hybrid. Mercedes made the best transition and results were instant with 16 wins from 19 races in 2014.

Hamilton sealed the title on the last day — again — although only because of an eccentric double-points rule introduced for the final race by then-F1 boss Bernie Ecclestone. Rosberg, who before the race told his rival to “drive cleanly”, took pole position and made a terrible start to finish 14th while Hamilton sealed title No. 2 with a victory.

Hamilton was dominant in 2015, sealing his third F1 title at the U.S. Grand Prix with three races to spare. In the cooldown room, Hamilton dismissively tossed a No. 2 cap to Rosberg. It appeared a calculated putdown and a clearly angered Rosberg tossed it back. This would prove a symbol of how a once-strong relationship nurtured during their karting days turned very sour.

It also spurred Rosberg on to surpass himself.

The German driver won the first four races of 2016 during a campaign that turned into a psychological war of attrition between the drivers.

They crashed into each other at the Spanish GP and clashed at the Belgian GP. They traded barbs and reproaches as Hamilton clawed back to take the championship to a finale under floodlights at Abu Dhabi.

But Rosberg had a 12-point lead and, although Hamilton won, Rosberg's second place earned him a title to match his father Keke Rosberg's 1982 title. Days later, Rosberg stunned F1 by retiring and this made things considerably easier for Hamilton. The decision by Mercedes to hire Valtteri Bottas — a modestly successful driver — was astute.

Freed from feuding and with a calm teammate driving, unofficially, as a No. 2, Hamilton won the next two championships in 2017 and 2018 as Vettel blew midseason leads for Ferrari. Had Rosberg stayed, he would likely have taken wins from Hamilton and this would have helped Vettel.

For Bottas has never mounted a challenge like Rosberg did. Last year's title was emphatic as Hamilton won 11 races compared to three for Bottas, finishing 87 points clear of him.

Hamilton will likely soon seal his seventh title and possibly has enough points already even if he didn't finish any of the last five races. Yet he has done so much more this year, emerging as a distinctive voice against racial injustice.

"He lives his life on his sleeve,” said tennis star Serena Williams, a close friend. "He says what he says and that’s just who he is ... So that’s one thing I’ve grown to really appreciate about him.”

Hamilton has a tattoo on his back which reads “Still I Rise,” the name of a poem written by Maya Angelou, an American civil rights activist.

Hamilton, who spoke of enduring racism as a child, has risen to every challenge so far.