The Jacksonville Jaguars are headed into their bye week with a six-game losing streak, a defense that can't stop anybody from scoring 30 points and an offense that flopped at one big moment after another at SoFi Stadium.

It's too early to tell whether the Jags are in for major changes after the long flight home from the franchise's first-ever game in the Los Angeles area. Coach Doug Marrone's job security is surely not rock-solid after losing 12 of his last 15 games with little hope of major improvements in sight.

But after this 39-29 loss Sunday to the one-win Chargers and impressive rookie quarterback Justin Herbert, Jacksonville (1-6) clearly needs some sort of change to have any hope of saving this season. 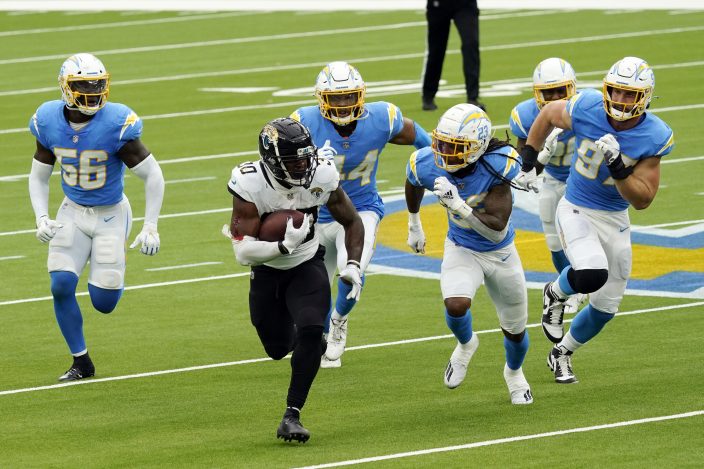 Jacksonville Jaguars running back James Robinson runs against the Los Angeles Chargers during the first half of an NFL football game Sunday, Oct. 25, 2020, in Inglewood, Calif. (AP PhotoAlex Gallardo)

“It hurts, but I wouldn’t say we’re discouraged,” said quarterback Gardner Minshew, who passed for 173 yards and two touchdowns without an interception. “Everybody is looking for a solution. It’s a fight, but as long as these guys continue to fight, we’re going to figure it out.”

When Marrone was asked whether the Jaguars are in danger of giving up on him, the veteran coach calmly replied: “That’s a question for them.”

“The one thing that’s out there on the field is they’re playing as hard as they can,” Marrone added. “We’re just not making the plays we need to make, so that’s on all of us, starting with me.”

The line behind Marrone is long, and it probably starts with the defense.

The Chargers' 39 points were the most allowed by the Jaguars this season, but Los Angeles is also the sixth straight team to score at least 30 against Jacksonville, the longest such streak in a single NFL season since the 1984 Minnesota Vikings.

Despite the Chargers' 484 yards and zero turnovers against a defense that's on pace to be the worst in Jacksonville history, defensive end Josh Allen insists the Jaguars are closer to success than they might seem to outsiders.

“If you really look at the film, if you look at the matchups, a lot of teams aren’t really doing nothing to us,” said Allen, who had two tackles in his return from a two-game absence with a knee injury.

Injuries are obviously a factor: The Jaguars already were shorthanded on defense without three starters, including former UCLA linebacker Myles Jack. Jacksonville then lost cornerback Sidney Jones and linebacker Dakota Allen in Inglewood.

Jacksonville also lost Dede Westbrook, its receiver and kick returner, to a knee injury on the last play of the third quarter

Still, Herbert tore up the remaining Jags for 413 total yards and four touchdowns. Los Angeles also scored the final 17 points of the game, methodically marching on three scoring drives while the Jags failed to get points on their only two fourth-quarter possessions.

Minshew felt the Jaguars’ problems started much earlier with four consecutive three-and-outs to begin the game, even though Jacksonville subsequently rallied from 16 points down to the take the lead. Minshew didn’t get his first completion until about 10 minutes remained in the second quarter on a catch that also resulted in the Jaguars’ initial first down.

“That’s about as bad as you can start,” said Minshew, who went 14 for 27. “But one thing I’m always proud of is we didn’t fold right there. We kept fighting, kept working. Defense kept us in it. We managed to find a groove, and then we couldn’t (finish).”

Indeed, the Jaguars were never really out of this game despite going scoreless in the fourth quarter. On their final offensive play, Minshew and D.J. Chark simply failed to connect on a long downfield throw on fourth down with 3:56 left. Chark was moderately open, and Minshew’s throw was fairly catchable, but the Jags just couldn’t get their act together.

Minshew wasn’t terrible, but he’s still doing nothing to stop Jags fans from fantasizing about Trevor Lawrence making those passes next season if Jacksonville can lose enough games to get him. Plenty of possibilities for the franchise’s direction undoubtedly will be considered in the next few days while owner Shad Khan decides what to do.

Perhaps the best indication of the Jags' current desperation appeared when Marrone threw his typical coaching caution to the wind.

He said he was “trying to give this team a spark” by being more aggressive than normal in short-yardage situations, so he went for three 2-point conversions and went for it four times on fourth down, including the biggest risk on a fourth-and-2 from the Jacksonville 46 midway through the third quarter.

The Jags converted two of their 2-point tries, but just one fourth down. That risky fourth-down run by Minshew was stuffed, and the Chargers drove down the short field for their go-ahead TD.

“Whenever a coach puts faith in you like that, you want to reward them,” Minshew said. “Sometimes we did, and sometimes we didn’t."

The Latest: Biden praises gov't OK of his formal t ...

John Boyega isn't going to 'take the money an ...