The big man in Tampa Bay's rotation has struggled with the little things, and the Los Angeles Dodgers have pounced on seemingly every mistake Tyler Glasnow has made.

Glasnow allowed four runs in five innings as the Rays fell 4-2 in Game 5 Sunday night, taking his second loss in this World Series. He threw a Series record three wild pitches, allowed a record-setting homer, and despite overpowering stuff, never took control against a Dodger team that has exposed his few flaws while moving within one win of the title.

Lanky and strong at 6-foot-8, Glasnow runs his fastball over 100 mph with electric rise and snaps his curveball violently toward the earth — a devastating 1-2 punch that rivals any in the game. 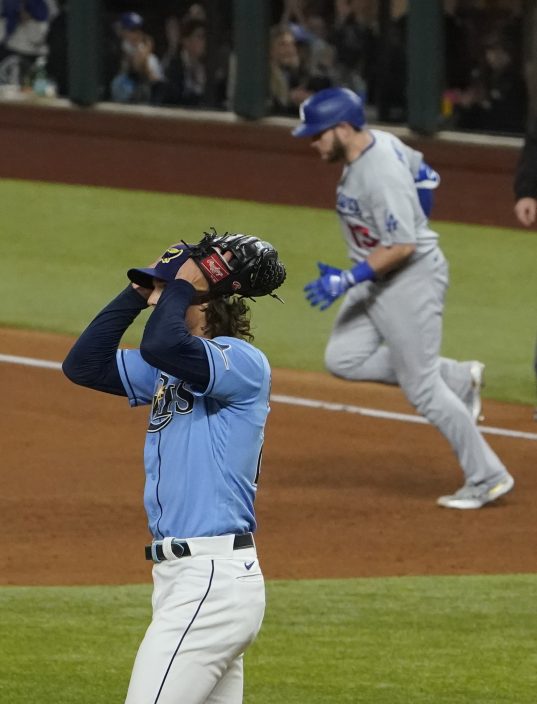 The right-hander with strikeout stuff has missed plenty of bats, striking out 15 over his two Fall Classic starts. But he has been hurt by shaky command, a weakness against the running game and perhaps because he lacks a reliable third pitch.

“What hurt him is the talent of the Dodgers lineup more than anything," Rays manager Kevin Cash said. "They’re just really, really talented.”

In Game 1, Glasnow couldn’t corral his curveball, choking them repeatedly in the dirt, and the Dodgers essentially stopped swinging at it. Without any other pitches to worry about, Los Angeles honed in on his fastball the second time through the order, stayed in the strike zone, and charged six runs to Glasnow over 4 1/3 innings while drawing six walks. LA won the game 8-3.

Glasnow struggled with his curve again in Game 5, although this time, he often missed up.

Mookie Betts opened the game with a double on a 3-2 fastball after taking two breaking pitches that missed the zone. Corey Seager then caught a hanging curve and ripped it for an RBI single and a fast 1-0 lead.

That’s when Glasnow really went wild. Seager took second after Glasnow threw a curve in the dirt, then got third on a bouncing 101 mph fastball. The two wild pitches tied a Series record for most in an inning by one pitcher. Seager scored on an infield hit by Cody Bellinger.

Joc Pederson led off the second with a home run, and Glasnow unfurled his record third wild pitch in the third inning, another curve that didn't make it to home plate.

Keeping baserunners in place has been a problem all Series for Glasnow. His slow delivery makes him an easy target for potential base-stealers, and Los Angeles swiped three bags against him in Game 1. With the wild pitches, the Dodgers carved out an easier way around the diamond in Game 5, although Austin Barnes nearly took a bag in the second inning.

Glasnow escaped the third by striking out Bellinger and getting Chris Taylor to ground out, and briefly showed just how dominant he can be during a stretch when he retired eight straight.

Max Muncy interrupted that in the fifth, sitting on a fastball and crushing it for a no-doubt homer and a 4-2 lead. Glasnow has allowed a record nine homers this postseason.

Glasnow finished out the fifth on his 102nd pitch and was pulled after allowing six hits and three walks, striking out seven.

“Credit to Glas for kind of calming himself a little bit in the moment and finding a way to get through five,” Cash said.