President Donald Trump plans to intensify an already breakneck travel schedule in the final full week of the presidential campaign, overlooking a surge of coronavirus cases in the U.S. and a fresh outbreak in his own White House.

Trump is expected to hit nearly a dozen states in his last-ditch effort to recover ground from Democrat Joe Biden, including Sunday’s trip to Maine and Tuesday’s to Nebraska. Both states award electoral votes by congressional district and could be crucial in a tight election. He will hold 11 rallies in the final 48 hours alone.

Biden, too, plans to pick up his travel schedule, aiming to hit the six battleground states the campaign sees as key to his chances, some with socially distanced in-person events and others with virtual events. On Tuesday the former vice president is traveling to Georgia, a state that hasn’t voted for a Democratic presidential candidate in more than a quarter-century but where polls show a tight race. 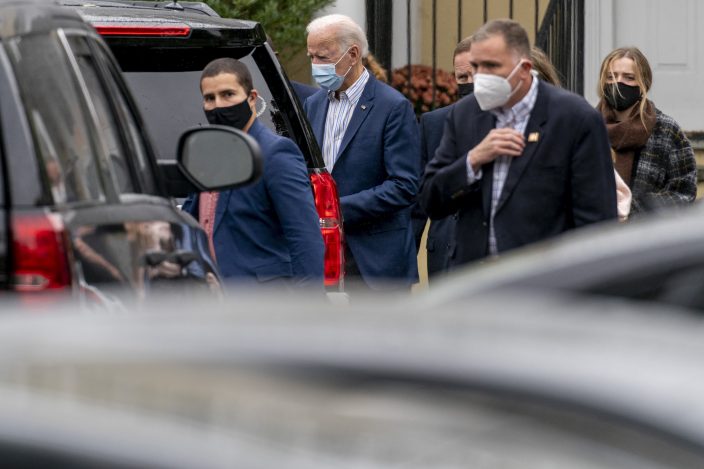 The final week of the campaign is colliding with deepening concerns about a public health crisis in the U.S. Trump is eager for voters to focus on almost anything else, worried that he will lose if the election becomes a referendum on his handling of the pandemic. Biden is working to ensure the race is just that, hitting Trump on the virus and presenting himself as a safer, more stable alternative.

The stakes were clear this weekend as the White House became the locus for a second outbreak of the virus in a month. Several close aides to Vice President Mike Pence tested positive for the virus, including his chief of staff, Marc Short. Pence, though, was insistent on maintaining his aggressive political calendar, even though he was deemed a “close contact” of his adviser, claiming the privileges of being an “essential employee.”

The latest outbreak has served as a potent metaphor for the divergent approaches the Trump and Biden campaigns have taken to the virus. On Sunday, White House chief of staff Mark Meadows said that “we’re not going to control the pandemic” and the focus should be on containment and treatment. Trump aims to pack thousands of people, most without face coverings, across some of the upper Midwestern states bearing the brunt of the surge. 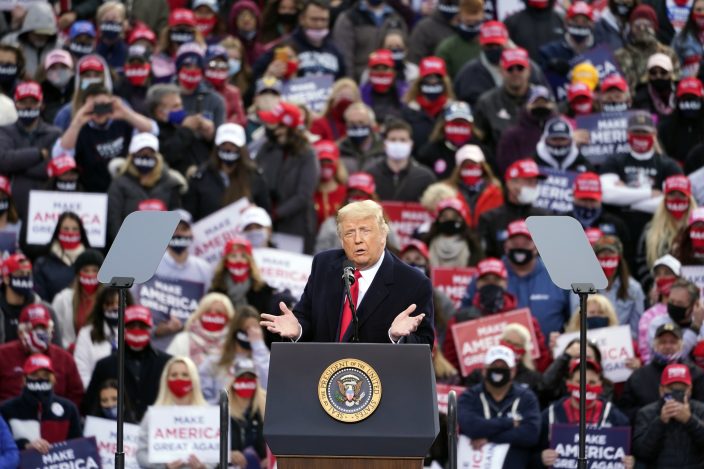 Meadows, pressed to explain why the pandemic cannot be reined in, said, “Because it is a contagious virus just like the flu.” He told CNN’s ”State of the Union” that the government was focused on getting effective therapeutics and vaccines to market.

Biden, in a statement, said Meadows’ comments continued with the Trump administration waving “the white flag of defeat” in the face of the virus. 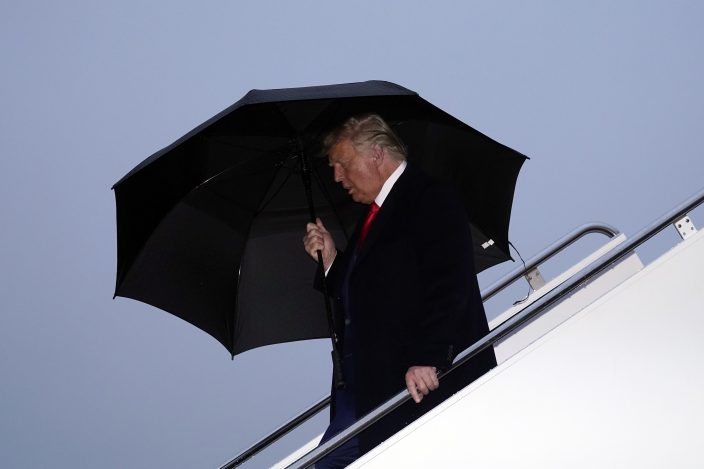 Biden’s team argues the coronavirus is likely to blot out any other issues that might come up in the final days of the campaign — including Biden’s recent debate-stage comment in which he affirmed he’d transition away from oil, later walked back as a transition away from federal subsidies. That strategy appeared to pay off as the outbreak in Pence’s staff refocused the national conversation once again on the pandemic.

Trump and his team, meanwhile, have struggled to settle on a closing message, with the undisciplined candidate increasingly trusting his gut over his advisers. He’s grasped for dirt on his Democratic rival and used apocalyptic terms to describe a Biden presidency, but Biden has thus far proven more resilient to such attacks than Trump’s 2016 rival.

“You can certainly expect that (Biden) will focus on COVID as it continues to, unfortunately, rise all across the country,” Biden deputy campaign manager Kate Bedingfield said in an interview. “It’s it is disrupting people’s lives and people are looking for a leader to put in place plans to get it under control.” 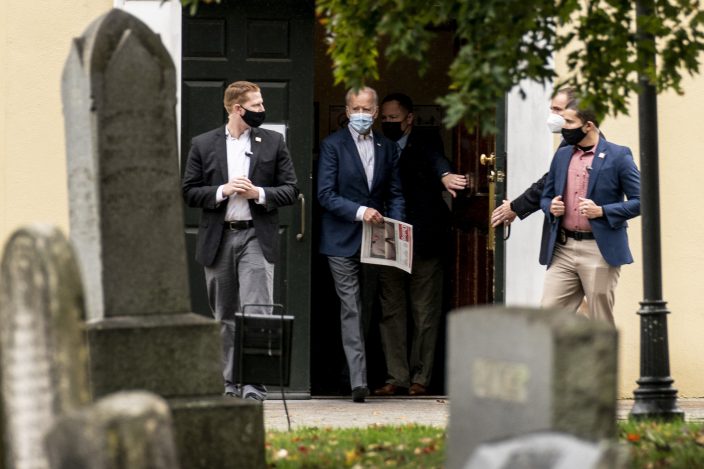 With more than a third of the expected ballots in the election already cast, it may become increasingly challenging for Trump and Biden to reshape the contours of the race. Biden is leading Trump in most national polls and has an advantage, though narrower, in many key battlegrounds.

Biden is also sitting on more campaign cash than Trump and is putting it to use, blanketing airwaves with a nearly 2-to-1 advantage over the final two weeks. The incessant campaign ads from Biden feature a mix of his aspirational message with stinging critiques of Trump’s handling of the pandemic.

“Those dual messages — continuing to draw a contrast with Trump, but also offering that positive aspirational message, giving people a reason to vote for Biden and not just against Trump — continues to be the best way forward. And we’re seeing it work,” he said.

Indeed, Biden has seen his favorability ratings steadily rise over the course of the campaign, despite a barrage of attacks from Republicans, while Trump remains underwater in such polls. Democrats have been heartened, too, by their lead in the record numbers of early votes that have been cast across a number of battleground states — though they caution that Republicans are more likely to turn out on Election Day and certain to make up ground.

Still, multiple Democrats described the “2016 PTSD” that’s keeping them up at night a week out from Election Day. In 2016, Hillary Clinton also enjoyed a lead in national and some state polls, and Democrats say their complacency then doomed their candidate. Now, with the pandemic and record numbers of mail and absentee ballots injecting a greater level of uncertainty into the election, Democrats are reluctant to let their guard down.

Biden’s campaign will focus in the final week on turning out what they’ve dubbed the “Biden coalition” — Black and Latino voters, as well as suburban, college-educated whites, women and older voters disaffected by Trump.

“What we see consistently is there aren’t a whole lot of undecided voters left, and at this stage of the race it’s really about turnout. It's about educating voters to make sure they know how to vote, and it’s about making sure that that they turn out,” Bedingfield said.

Biden’s campaign has emphasized the need for Democrats to stay engaged even as the polls seem to favor their candidate. In a recent memo, Biden campaign manager Jen O’Malley Dillon said that “in a number of critical states we are functionally tied,” and warned supporters that “every indication we have shows that this thing is going to come down to the wire.”

Bedingfield says that’s a message the campaign will continue to push through Nov. 3.

“One thing that we have been very vocal about is that we do believe the race is tighter than a lot of the public polling would suggest,” she said. “We are constantly working to ensure that that people understand that there is an urgency here, and that we can’t get complacent.”