Kyler Murray and Russell Wilson traded long throws and scrambling runs all night, putting on a prime-time show in the desert.

When the game got to overtime, it was Murray, heir — air-and-leg — apparent to Wilson among diminutive quarterbacks, who rose to snatch the victory.

Now, the Seattle Seahawks are unbeaten no more. 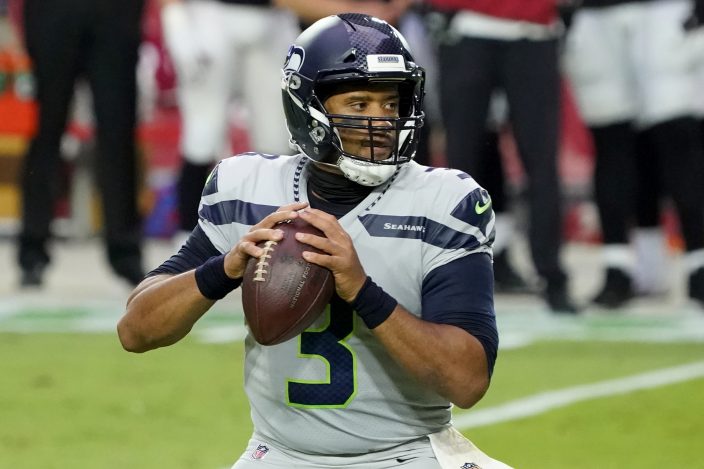 Seattle Seahawks quarterback Russell Wilson (3) looks to pass against the Arizona Cardinals during the first half of an NFL football game, Sunday, Oct. 25, 2020, in Glendale, Ariz. (AP PhotoRick Scuteri)

Wilson threw his third interception of the game in overtime and Zane Gonzalez followed with a 48-yard, second-chance field goal, knocking the Seahawks from the ranks of the unbeaten with a 37-34 loss Sunday night.

“We usually win games like this,” Wilson said. “That’s reality. We usually win these close matchups, have done it for years. Our confidence and our vision who we’re going to be isn’t going to change.”

Seattle (5-1) won its first five games behind a prolific offense and Wilson’s MVP-caliber start to overcome a shaky defense.

The Seahawks followed the same blueprint against the Cardinals (5-2), as Wilson repeatedly escaped pressure and winged passes into tight windows to build a late 10-point lead.

They combined to become the first quarterbacks in the Super Bowl era to have at least 300 yards passing and 50 rushing in the same game.

Murray kept making plays in the overtime. Wilson did not.

After escaping pressure all night, Wilson was sacked twice on Seattle's opening overtime drive, the second leading to a punt.

Murray put the Cardinals in position to win it, but Gonzalez had a 41-yard field goal wiped out because coach Kliff Kingsbury called timeout with the play clock winding down. Gonzalez pulled the second attempt wide left, opening the door for one of the NFL's best quarterbacks to pull of his magic.

Instead, Wilson threw a ball into coverage and Cardinals linebacker Isaiah Simmons came down with it. Murray used his legs and arm to move Arizona down the field and Gonzelez, given a second chance, slipped his 48-yard field goal just inside the left upright to send the Cardinals charging onto the field in celebration.

“It could be one of the best things that could happen to us,” said Seattle's Tyler Lockett, who had 15 catches for 200 yards and three TDs. “We could have been 6-0 or we could have been 5-1. Sometimes you need a wake-up, you need to get hit in the mouth when you thought you won the fight. It progresses you to be more successful down the road.”

The Seahawks finished with 572 total yards, but gave up 516.

They also had plenty of chances to put the game away or even end it.

Seattle led 34-24 with 5 1/2 minutes left after Lockett made a spectacular diving catch in the back of the end zone. The Seahawks allowed the Cardinals march down the field to attempt a field goal, only to give them new life with a penalty on the kick attempt. Murray used the second chance to hit Christian Kirk on an 8-yard TD pass.

The Seahawks could have worked the clock to zero on their last drive of regulation, only to fail on a third down and punt the ball away. Gonzalez hit a 44-yard field goal on the final play of regulation to tie the game at 34-all.

Seattle looked as if it had the game won in overtime when DK Metcalf raced off for 48-yard touchdown, but the play was called back for a holding call on receiver David Moore.

The Seahawks got a reprieve when Gonzalez missed his first OT attempt. Then Wilson's interception and an inability to stop the Cardinals led to Gonzalez's redemptive, game-winning kick.

As a result, the Seahawks are undefeated no more.

Streb nearly holes out in a playoff to win at Sea Islan ...

Guatemalan Congress backs down on budget after protests