The AP Top 25 is embracing diversity.

Nine of the 10 FBS conferences have a ranked team this week, including all the leagues currently playing games. Plus, there is an independent.

There is something for everyone, but that kind of variety can make some fans question whether those non-Power Five teams really belong? 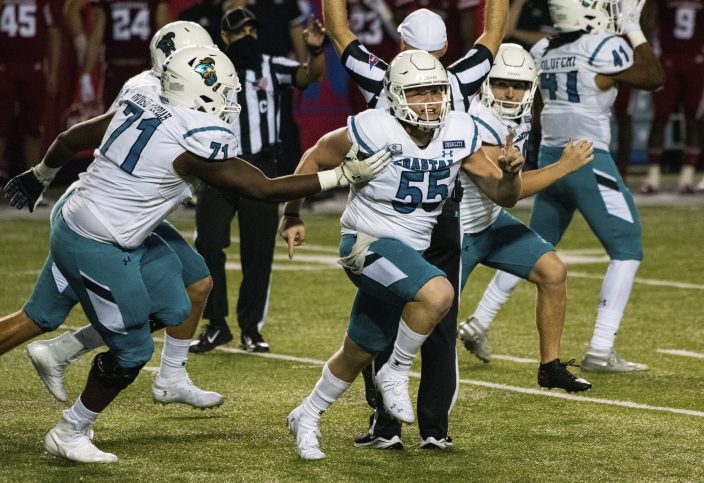 Cincinnati at No. 7? Would the Bearcats from the American Athletic Conference really beat the three Power Five teams — Texas A&M, Wisconsin and Florida — ranked directly behind them?

Is Marshall from Conference USA actually the 19th best team in the country?

No. 20 Coastal Carolina from the Sun Belt is a good story, but aren't there a dozen unranked teams better than the Chanticleers?

Odds makers probably wouldn't be as high on those Group of Five teams as AP poll voters, but voters aren't just speculating on hypothetical results. They're also rewarding success.

Sure, Marshall and Coastal probably wouldn't fair too well in a 10-game series against No. 24 Oklahoma. But go ask Sooners fans how satisfied they are with their team's season so far. Doubt you'll find many pleased with losses to Kansas State and Iowa State.

If you want to play the transitive wins games: No. 23 Iowa State lost to Louisiana-Lafayette, which then lost to Coastal Carolina. Hence, Coastal is better than Oklahoma.

Reality check doesn't buy that, of course, but does believe that a ranking is a reward and has no issues with rewarding teams for success. Otherwise, why even play the games?

Next: vs. Boston College, Saturday.

Reality check: Coach Dabo Swinney wasn't thrilled about getting a mild grilling for his team's meh performance against hapless Syracuse. Such is life at the top of the very top of the food chain. Poll voters didn't hold it against the Tigers.

Next: vs. Mississippi State, Saturday.

Reality check: The Crimson Tide has so much talent that the loss of single player, even one as good as WR Jaylen Waddle, won't make much of a difference against the majority of their opponents. But against the best competition, Waddle will be missed.

Reality check: The Buckeyes would probably like to get more production from running backs Trey Sermon and Master Teague (23 carries for 96 yards), if we're being picky.

Next: at Georgia Tech, Saturday.

Reality check: The theme with the Fighting Irish has been developing a down field passing game. They found it against Pitt with six plays of 20-plus yards after eight in the first four games. But losing WR Kevin Austin to an injury might be the bigger long-term news on that front.

Next: at Kentucky, Saturday.

Reality check: After a week off to stew in that humbling loss to Alabama, the Bulldogs' talented defense gets a Kentucky offense that has not cracked 300 yards in any of its last three games, averaging 3.97 yards per play.

Next: vs. Texas, Saturday.

Reality check: In the upside world of 2020 college football, the Cowboys have a lock-down pass defense (5.7 yards per attempt) and passing offense still searching for some pop to go along with star WR Tylan Wallace.

Next: vs. Memphis, Saturday.

Next: vs. Arkansas, Saturday.

Reality check: Aggies start a four-game stretch that includes South Carolina, Tennessee and Ole Miss, and could have them on the fringe of the playoff conversation when those rankings come out in late November.

Next: at Nebraska, Saturday.

Reality check: It was a near perfect debut for QB Graham Mertz, but, according to a report, a positive COVID-19 test could derail his and the Badgers' season.

Next: vs. Missouri, Saturday.

Reality check: That Missouri offense is looking far more challenging for a Gators' defense that was struggling even before the team had to shut it down for two weeks because of COVID-19 outbreak.

Next: vs. Western Kentucky, Saturday.

Reality check: You can question whether the voters are showing too much love for the Cougars given their schedule, but the computers have bought in, too. ESPN's SP+ has BYU 10th and the more old-school Sagarin Ratings have BYU at No. 6.

Next: at North Carolina State, Nov. 6.

Reality check: Where did the running game go? The defenses have gotten better, but the Hurricanes averaged 5.9 yard per rush in their first three games and 2.8 in the last three.

Next: vs. Michigan State, Saturday.

Reality check: There was a lot to like about Michigan's offense and the Joe Milton experience, but Reality Check is going to proceed cautiously. Looked pretty good, though.

Reality check: A trio of junior tailbacks — CJ Verdell, Travis Dye and Cyrus Habibi-Likio — will be expected to carry an offense breaking in a new starting quarterback.

Next: at Virginia, Saturday.

Reality check: The Tar Heels might have the best offense in the ACC. Yes, including Clemson.

Next: at West Virginia, Saturday.

Reality check: According to Pro Football Focus' grades, the Wildcats have two of the top-five cornerbacks in the country in Justin Gardner and Ekow Boye-Doe.

Next: at Rutgers, Saturday.

Reality check: Getting outgained by 277 yards, as the Hoosiers did by Penn State, is not a repeatable winning formula, and their schedule is not easy. The next couple weeks could be the high-water mark for Indiana this season.

Reality check: Before Saturday, the Nittany Lions only loss to an unranked Big Ten team since 2016 was against a Michigan State team that finished 7-6 in 2018.

Next: at FIU, Friday.

Reality check: Take a quick glance at the Thundering Herd's schedule. They only have four games left — though they could add another one or two — and will be huge favorites in all of them.

Next: at Georgia State, Saturday.

Reality check: QB Kedon Slovis and the offense will get a ton of hype, but S Talanoa Hufanga might be the Trojans' most fun player to watch. All over the field, wrecking plays.

Next: vs. Navy, Saturday.

Reality check: The Mustangs were held to 3.41 yards per play by Cincinnati. They hadn't been under 6.65 this season and had not been held under 4.0 since the TCU game in early 2017.

Next: at Kansas, Saturday.

Reality check: Maybe it's a dearth of outside receivers, but QB Brock Purdy is having his worst season yet.

Next: at Texas Tech, Saturday.

Reality check: The Sooners are back in the rankings after a three-week break and two straight victories. The tiebreakers will make it tough for Oklahoma to get back to a Big 12 title, but Reality Check isn't counting out OU.

Next: at Air Force, Saturday.

Reality check: The Broncos have been ranked for at least a week in 19 straight seasons, This could be the start of a lengthy stay.