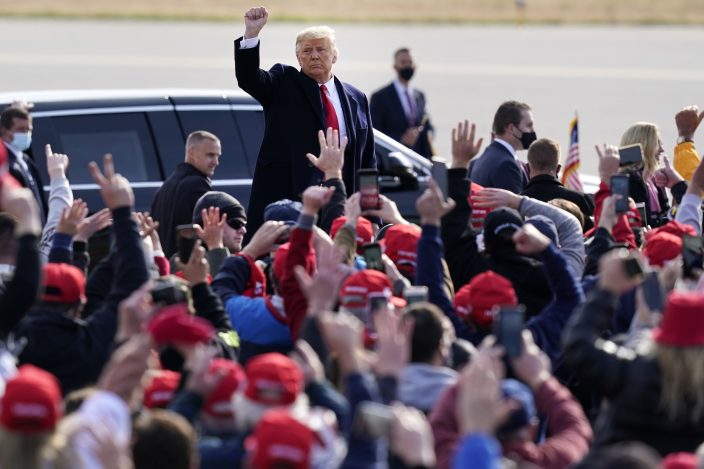 ELECTION 2020 -- President Donald Trump plans to intensify an already breakneck travel schedule in the final full week of the presidential campaign, overlooking a surge of coronavirus cases in the U.S. and a fresh outbreak in his own White House. Democrat Joe Biden too plans to pick up his travel schedule, aiming to hit the half-dozen battleground states the campaign sees as key to his chances. By Zeke Miller and Alexandra Jaffe. SENT: 1,160 words, photos.

ELECTION 2020-EARLY VOTE — With nine days before Election Day, more people already have cast ballots in this year’s presidential election than voted early or absentee in the 2016 race as the start of in-person early voting in big states has caused a surge in turnout in recent days. By Nicholas Riccardi and Angeliki Kastanis. SENT: 600 words, photos. 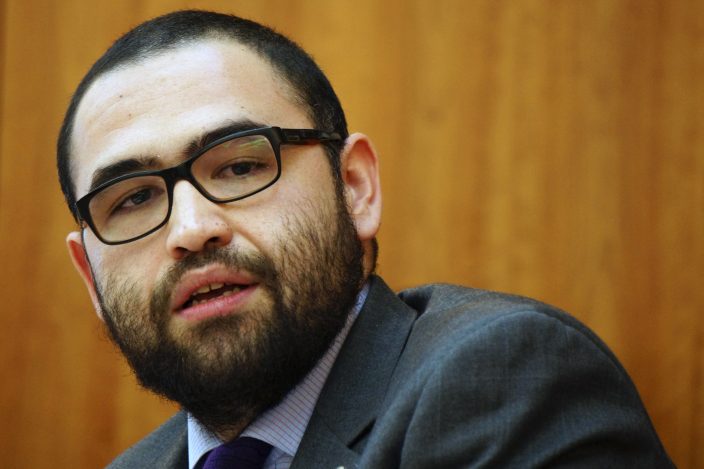 VIRUS OUTBREAK-SURGE OF SUFFERING — About half of U.S. states have seen their highest daily coronavirus infection numbers so far at some point in October, and the country as a whole came very close to back-to-back record daily infection rates on Friday and Saturday. Some Northeastern states hit hard in the spring are seeing numbers bounce back and COVID-19 is surging in Idaho and Utah. By Holly Ramer and Adrian Sainz. SENT: 1,090 words, photos.

VIRUS OUTBREAK — The coronavirus pandemic is surging across Europe with renewed force and, with winter coming, its restaurant industry is struggling. Spring lockdowns already devastated many eateries, and now a new set of restrictions is dealing a second blow. More than just jobs and revenue are at stake — restaurants lie at the heart of European life. By Raf Casert. SENT: 1,150 words, photos.

VIRUS OUTBREAK-IRAN-MIXED SIGNALS — Iran’s health minister recently delivered a rare speech criticizing his own government’s refusal to enforce basic health measures, as coronavirus infections and deaths surge in the Islamic Republic. Yet just one day later, the minister sent a starkly different message, seeking to reassure the public that things were under control. The rhetorical about-face is typical of Iranian leaders’ inconsistent response to the pandemic that many see as helping to fuel the virus’s spread. By Isabel Debre. SENT: 1,060 words, photos.

ELECTION 2020-MASSACHUSETTS-BALLOT BOX — Massachusetts election officials say a fire was set in a Boston ballot drop box holding more than 120 ballots in what appears to have been a “deliberate attack.” SENT: 390 words.

OBIT-ROBERT MURRAY — Coal magnate Robert Murray has died at his home in Ohio less than a week after announcing his retirement as board chairman of a major U.S. coal operator. SENT: 250 words.

PLANE CRASH-ALABAMA — Authorities have identified the two service members who were killed when their plane crashed in a residential Alabama neighborhood. SENT: 240 words.

TRUMP HALLOWEEN — Halloween goes on at the White House with a few twists. SENT: 240 words, photos.

VIRUS OUTBREAK-ASIA — Sri Lanka’s Parliament has been closed in order to disinfect the premises after a police officer at the complex tested positive for the coronavirus amid a new surge of the virus in the country. An official said that Parliament was closed Monday for two days as a precautionary measure so the premises can be disinfected. SENT: 530 words, photos.

FACT CHECK-WEEK -- President Donald Trump says Mexico is paying for the wall (it isn’t), health care choice for veterans came from him (it didn’t) and his tax cut stands as the biggest in American history (nowhere close). These are among his touchstones -- and he’s got fresher false material, too. By Calvin Woodward and Hope Yen. SENT: 1,840 words, photos.

ARMENIA-AZERBAIJAN — Armenia and Azerbaijan have agreed to a third attempt to establish a cease-fire in their conflict over Nagorno-Karabakh starting at 8 a.m. Monday. SENT: 860 words, photo.

JAPAN-SUGA-POLICY SPEECH — Japanese Prime Minister Yoshihide Suga has declared Japan will achieve zero carbon emissions by 2050 in his first policy speech after taking over from Shinzo Abe. The policy speech Monday at the outset of the parliamentary session set an ambitious agenda reflecting Suga’s pragmatic approach to getting things done. SENT: 870 words, photos.

THAILAND PROTESTS — Thailand’s Parliament has begun a special session that was called to address tensions as pro-democracy protests draw students and other demonstrators into the streets almost daily demanding the prime minister’s resignation. SENT: 750 words, photos.

MALAYSIA-POLITICS — Malaysia’s prime minister said his government was prioritizing protecting people from COVID-19 amid a new outbreak after the king rejected an emergency proposal that critics saw as an undemocratic attempt to hold onto power. SENT: 540 words, photos.

ASIA-TYPHOON — A fast-moving typhoon has forced thousands of villagers to flee to safety in provinces south of the Philippine capital. It flooded rural villages, ripped off roofs, toppled trees and electric posts and knock off power in several towns. SENT: 280 words, photos.

AUSTRALIA-QATAR-EXAMINATIONS — Australia has condemned Qatar authorities’ treatment of women passengers on a flight to Sydney who were subjected to internal examinations after a newborn baby was found abandoned at a Doha airport. The women were examined on Oct. 2 after Qatar Airways Flight 908 to Sydney was delayed. SENT: 510 words, photos.

VENEZUELA — Venezuela’s Leopoldo Lopez has arrived in Spain and been reunited with his family. López arrived Sunday in Madrid following what aides described as a whirlwind escape from the Spanish ambassador’s residence in Caracas. SENT: 830 words, photo.

LEGISLATOR THREATENED-NEW MEXICO — A New Mexico state senator says he received anonymous threatening telephone messages shortly after publicly criticizing a political demonstration that took place outside the state Capitol, and that he fears for his safety. SENT: 420 words, photos.

CALIFORNIA-WILDFIRES — Hundreds of thousands of Californians lost power as utilities sought to prevent the chance of their equipment sparking wildfires and the fire-weary state braced for a new bout of dry, windy weather. SENT: 690 words, photos.

TRUMP CONVOY PROTESTS — Skirmishes broke out between supporters and opponents of President Donald Trump as a Jews For Trump convoy of cars draped with American flags and Trump 2020 banners rolled through Manhattan and Brooklyn. SENT: 300 words.

BRITAIN-THEATER AWARDS — Andrew Scott and Ian McKellen are among acting winners as Britain’s Laurence Olivier Awards celebrates the best of the London stage. It was a bittersweet event Sunday night, since most U.K. theaters remain closed because of the coronavirus pandemic. SENT: 440 words, photos.

PEOPLE-HARRY STYLES — While most music stars are rescheduling tour dates to 2021, Harry Styles is looking farther ahead and making plans to headline his own arena — one planned to be completed in Manchester, England, in 2023 SENT: 570 words, photos.

NEWBORNS-OPIOIDS — The American Academy of Pediatrics says pregnant women with opioid addiction should have access to medication in new guidelines released Monday aimed at improving care for women and newborns affected by drug use. SENT: 410 words, photos.

BBO--WORLD SERIES — Dodgers star Clayton Kershaw beat the Tampa Bay Rays for the second time in six days, escaping a fourth-inning jam with a quick reaction throw to cut down a runner trying for a rare steal of home plate, and Los Angeles held on for a 4-2 win and a 3-2 World Series lead. By Baseball Writer Ronald Blum. 1,300 words, photos.