Manchester City’s weary players boarded a plane to France on Monday, the southern city of Marseille being the latest stop on their gruelling and seemingly interminable fixture schedule in a pandemic-disrupted season like no other.

There will have been no senior strikers on the flight, with Sergio Aguero injured again and joining Gabriel Jesus back in the treatment room.

Star midfielder Kevin De Bruyne will be on board, recently back from injury and fresh from protestations about the workload being forced on soccer players this season. 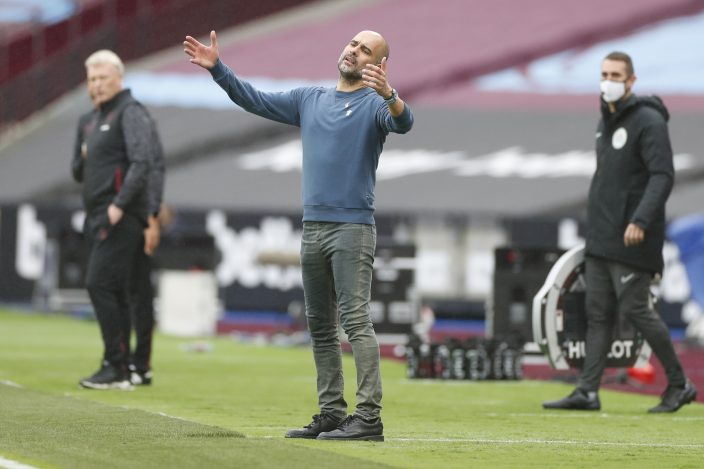 Whether Aymeric Laporte, City’s defensive lynchpin, will play in the Champions League match at the Stade Velodrome on Tuesday is in the balance after his run of fitness issues.

“I try to demand everything from my players,” City manager Pep Guardiola said at the weekend, “but there is a limit for human beings.”

Sympathy is usually in short supply when it comes to Man City and the debate over workload and fixture congestion. 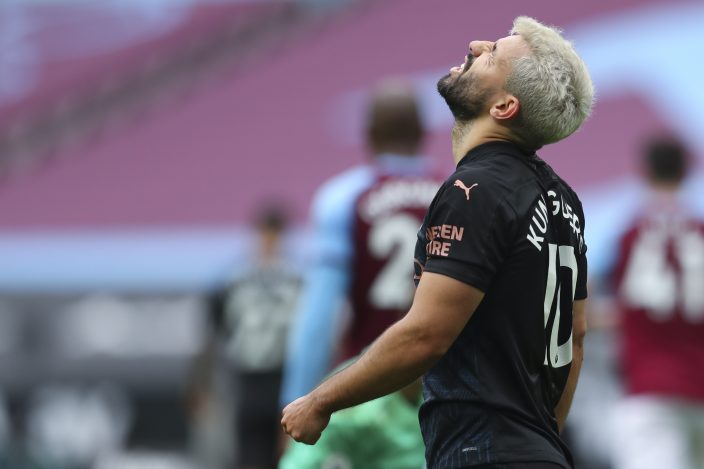 “It’s the richest club in the world,” is a typical retort. And most would say it’s a perfectly reasonable one, given City spent more than 100 million pounds ($130 million) on two center backs in the offseason, one of whom is purely seen a back-up.

Yet, it is hard to escape the fact that City’s performances have rarely looked flatter and more predictable under Guardiola than they have since the start of the season.

In short, being the busiest team in English soccer in recent years appears to be taking its toll. 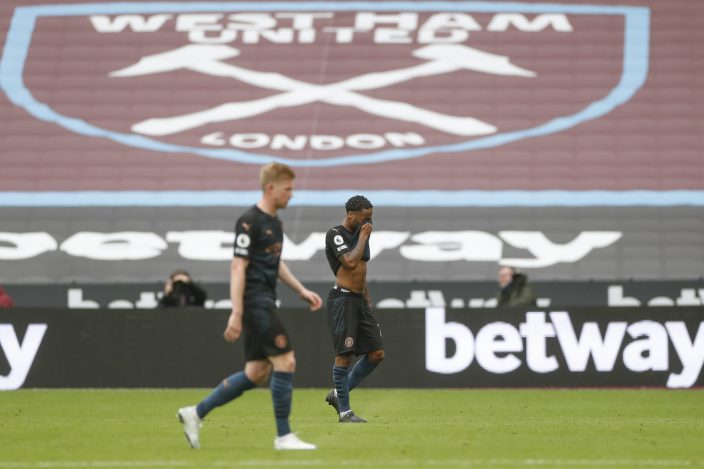 Manchester City's Raheem Sterling, right, and Kevin De Bruyne walk off the pitch at the end of the English Premier League soccer match between West Ham and Manchester City, at the London Olympic Stadium Saturday, Oct. 24, 2020. The game ended in a 1-1 draw. (Paul Childs, Pool via AP)

A 1-1 draw at West Ham in the Premier League on Saturday has left City in 13th place and on eight points — its lowest tally after five games since 2014.

Only five teams have scored fewer goals in the Premier League than City’s eight, so even an attack that season after season creates more chances than any other team is misfiring by its usual high standards.

Of course, it doesn’t help when Guardiola is without a recognized striker — Jesus got injured in the first game of the season, and Aguero has broken down three games into his return from four months out — but there’s more to it than that.

“We don’t have enough preparation in our legs throughout the whole squad,” the City manager said, referring to the fact his players had an offseason just two weeks long owing to the late finish to last season because of its involvement in the last eight of the Champions League in August.

“Of course, it’s too much,” Guardiola added while raising concerns about the “mental state" of some of the players. “It’s not more difficult to understand than this.”

City is coming off a 54-week campaign in the 2019-20 season that was interrupted by the three-month suspension of soccer because of the coronavirus outbreak.

Over the past two seasons, the team has played 120 games in all competitions — more than any other in England’s top flight. This season, which started a month later than normal, City have been playing a match every three or four days aside from the international breaks, and will continue to do so until January. Even when club soccer stops for internationals, players can feature in as many as three games for their countries, potentially in a six-day span.

“Your body is screaming out for a rest but nobody listens to the players,” De Bruyne said in an interview with Sky Sports during the most recent international break, when he picked up a muscle injury. “Everyone says, ‘They earn good money, they’ve just got to manage.’ And that’s it, I can put up with those comments.

De Bruyne said he had just “eight or nine days off” in the offseason and was unable to take a holiday because his wife was pregnant.

“If I keep going until the end of the season,” he said, “I will have been playing for two years without a rest.”

It begs the question why Guardiola chose to field an unchanged starting team — the first time he has done so since October 2017 — against West Ham on Saturday lunchtime, given the fixture congestion and his concerns over workload.

After all, City had to work hard for its 3-1 win over Porto on Wednesday evening. Raheem Sterling, for example, has played 90 minutes in each of City’s last three games and is set to be relied on heavily as a makeshift striker in the absence of Aguero and Jesus.

City has at least made a winning start to its Champions League group. And, despite its slow start in the league, could only be two points off the lead if the team wins its game in hand.

Guardiola is into his fifth, and possibly last, year in charge and hasn't given any clues over whether he intends to stay beyond his season.

If he is to add to his collection of trophies won at City since 2016, don’t expect them to come easily this season.