Police video of a suburban Chicago police officer's fatal shooting of a Black man and the wounding of a Black woman as the couple were inside a vehicle is expected to be released once relatives view that video, the mayor of the city where the shooting occurred said.

Waukegan Mayor Sam Cunningham said during a Sunday prayer vigil for Marcellis Stinnette, 19, who died in last Tuesday's shooting, that the city intends to publicly release the bodycam and dashcam video recordings, but only after Stinnette's family views them first.

“Let’s be clear, this situation requires their approval before we move on,” Cunningham said. 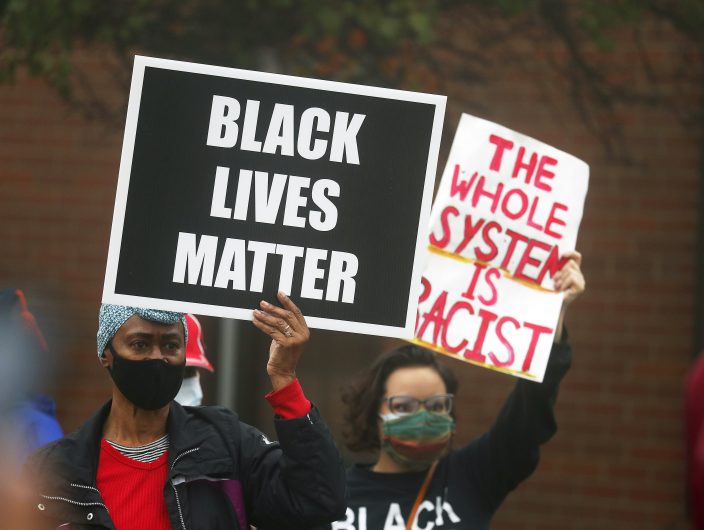 People hold signs during a protest rally for Marcellis Stinnette who was killed by Waukegan Police last Tuesday in Waukegan, Ill., Thursday, Oct. 22, 2020. Stinnette was killed and his girlfriend and mother of his child, Tafara Williams, was wounded when a police officer in Waukegan opened fire Tuesday night after police said Williams' vehicle started rolling toward the officer following a traffic stop. (Brian HillDaily Herald via AP)

He also urged the public to let justice take its due course in the case, which on Friday led to the firing of the officer who shot the couple. Cunningham called for the community to “respect the process” in the city about 40 miles (64 kilometers) north of Chicago.

Activists and relatives of Stinnette and Tafara Williams, 20, who was wounded in the shooting and remains hospitalized, have demanded the release of the police video, which authorities say has been turned over to investigators. On Saturday, Williams spoke from her hospital bed to a crowd at a rally in Waukegan, saying she “won’t sleep until Marcellis gets justice.”

Activist Chris Blanks said last week that the video is particularly important because the police version of events and the version Williams' mother has shared appear to contradict each other. Clifftina Johnson has said her daughter told her that she and Stinnette — who was Williams' boyfriend — had done nothing to provoke the officer.

Waukegan police have said Williams was driving and Stinnette was a passenger in a vehicle that fled a traffic stop conducted by a white officer late Tuesday and that the vehicle was later spotted by another officer, who is Hispanic. Police said that as the second officer approached, the vehicle started moving in reverse and the officer — fearing for his safety — opened fire. No weapon was found in the vehicle.

The officer who shot the couple, who have a child, was fired late Friday by Waukegan Police Chief Wayne Walles. He said in a brief statement that the male officer, a five-year department veteran, had committed “multiple policy and procedure violations.”

Walles offered his condolences to Stinnette and Williams' families during Sunday’s vigil, which attracted a large crowd, the (Arlington Heights) Daily Herald reported.

“There is power in prayer, and the more of us that are together and praying, and praying for each other and everybody involved in this terrible incident, will help us heal and move forward,” he said.

Williams’ sister, Sasha Williams, said at Sunday's vigil that her sister is working to recover her strength so she can return to caring for her children.

Lake County State’s Attorney Mike Nerheim also attended Sunday's vigil. He said Friday that he had asked the U.S. Justice Department to review the circumstances surrounding the shooting, and said the federal agency had agreed to do so. He has urged calm while the investigation takes place and pledged transparency.

South Carolina and Kentucky each a ...