Jacob Umaga is set to become the latest member of his star-studded rugby-playing family to earn senior international honors after being selected in England’s squad for the match against Italy on the final weekend of the pandemic-extended Six Nations.

The nephew of former All Blacks captain Tana Umaga and the son of ex-Samoa international Mike Umaga, Jacob was rewarded for his breakthrough season with Wasps in the English Premiership by being one of just two flyhalves picked in the 36-man squad alongside captain Owen Farrell.

And with the other No. 10, George Ford, unavailable for the match in Rome as he recovers from an Achilles injury, the 22-year-old Umaga is likely to feature in the match in Rome — most likely from the bench but potentially in the starting XV if Farrell is selected in the centers. 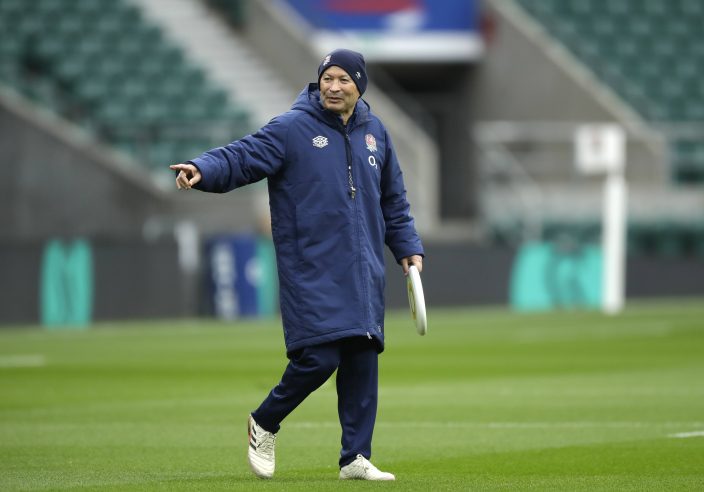 England coach Eddie Jones gestures holding a frisbee during an England rugby team training session at Twickenham in London, Saturday, Oct.17, 2020. England are preparing for a series of matches including the finish of the Six Nations championship which was interrupted earlier in the year because of the coronavirus outbreak. (AP PhotoMatt Dunham, Pool)

England could win the Six Nations tournament for the first time since 2017 with a bonus-point victory, though the result of the France-Ireland match being played later Saturday will have a bearing on where the title goes.

Umaga, whose father’s cousin is the late New Zealand flanker Jerry Collins, was called up to the senior England camp in January for the start of the tournament after just four starts in his first season in the English Premiership. He didn’t make any of England’s first four matchday squads before the Six Nations was suspended because of the coronavirus outbreak, but has remained on coach Eddie Jones’ radar and shone since the restart of domestic competition in August.

Umaga, who has played for England Under-18s and Under-20s, scored a try for Wasps in their loss to Exeter in the Premiership final on Saturday.

“Jacob is a young guy at 10 who attacks the line and has plenty of courage in the way he plays,” Jones said in a video call on Monday. “He’s a solid defender and is one of the reasons why Wasps did so well.

“We had him in camp earlier in this Six Nations and we were impressed by what he did, so we’re looking forward to working with him again.”

Jones confirmed Ford is out for “a couple of weeks,” creating the opportunity for Umaga.

Jones will name his team on Thursday.

England hasn’t played a competitive match since March and was supposed to get a run-out before the Italy game by taking on the Barbarians on Sunday.

However, the fixture was called off after a number of the invitational club’s players, including former England captain Chris Robshaw, broke coronavirus protocols.

Jones said he didn’t get angry when he heard the match against the Barbarians was canceled. Instead, he went up to his hotel room and “worked out a Plan B” with Farrell.

“We quickly had a plan in place about an hour after the cancellation of the game and we were on to the next thing,” Jones said.

“We are pretty good at these things — we had the same situation with the typhoon in Japan,” he added, referring to the time when England’s Rugby World Cup pool match against France was called off last year. “This time it was just a bit of a different typhoon.”

England is a point behind Ireland going into the final round. Ireland has a superior points difference of 23 compared to England.

France is tied for points with second-place England but has an inferior points difference of 2.

Maguire returns to England squad but Greenwood, Foden out