A week before U.S. elections, expectations and attention are unusually low in a foreign country that may have more at stake than any other. Many Mexicans would be glad to see a more neighborly president who hasn’t called Mexicans rapists or threatened to build a wall against them, but the relationship has survived a Donald Trump presidency, so there’s a feeling it can handle any outcome.

In the streets, few can name Democratic candidate Joe Biden, but there’s a general sense that Mexicans are ready to take their chances with someone other than Trump.

“No Mexican, no human being likes to be called a rapist, a thief, told that you’re not liked,” said Ana Vanessa Cárdenas Zanatta, a political science professor at Monterrey Technological and Anahuac universities in Mexico City. “The least that any human being, and the Mexicans in this bilateral relationship, can hope for is respect.” 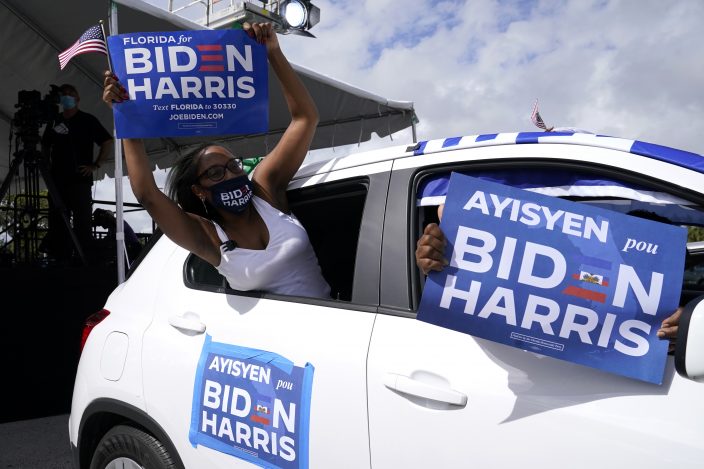 Nashley Harrigan, who is of Haitian descent, cheers from her vehicle at a car rally before a speech by former President Barack Obama who is campaigning for Democratic presidential candidate former Vice President Joe Biden at Florida International University, Saturday, Oct. 24, 2020, in North Miami, Fla. (AP PhotoLynne Sladky)

Respect can be especially important when roughly three-quarters of a country's exports go to the United States and hundreds of millions of people cross the border in both directions yearly for work, shopping, family visits or vacations.

In a Trump administration marked by unpredictability that has left allies reeling, Mexico has been one country that has been able to carve out a fairly predictable, if sometimes pressured, relationship with Trump. For example, when Mexico was on the brink of defaulting on treaty obligations governing water-sharing this month, the Trump administration provided a graceful exit.

Trump so far hasn't targeted Mexico in his campaign like he did the first time around. The pandemic and the economic crisis it sparked have overtaken all other issues — on both sides of the border. 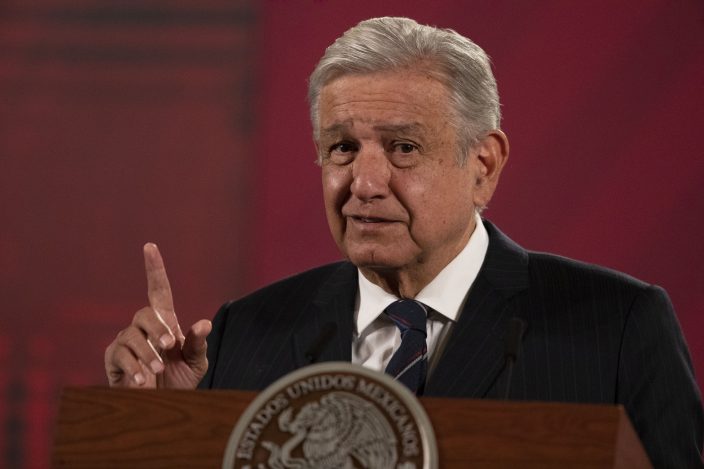 Mexico has lost at least 1 million formal jobs during the pandemic, the economy is forecast to shrink 10% this year, violence remains beyond the government’s control and COVID-19 infections are climbing again.

Regardless of whether Trump or Biden wins, immigration, security and trade are expected to dominate the historically unbalanced relationship.

On immigration, there is skepticism that much would change.

Relatives bury Isaac Nolasc,o who died of reasons not believed related to COVID-19, in a section of the municipal cemetery of Valle de Chalco amid the new coronavirus pandemic, on the outskirts of Mexico City, Sunday, Oct. 25, 2020. Mexican families traditionally flock to local cemeteries to honor their dead relatives as part of the "Dia de los Muertos," or Day of the Dead celebrations, but according to authorities, the cemeteries will be closed this year to help curb the spread of COVID-19. (AP PhotoMarco Ugarte)

Trump made Mexico an immigration waiting room for the U.S. and some say effectively pushed the U.S. frontier south for immigrants. Thousands of asylum seekers were forced to wait out their cases in Mexican border cities before the pandemic allowed the U.S. to effectively suspend its asylum system at the border.

Through the threat of tariffs on Mexican imports, Trump got the Mexican government to act more aggressively toward migrants crossing its territory. Early this year, Mexico’s National Guard and immigration agents broke up a migrant caravan near the Guatemala border before it gathered any steam.

“If Biden makes it, I believe there will continue to be great pressure to stop the migrant caravans,” Cárdenas said. “But I think the nuance, the tone in which its done will be different.” That might even complicate things for Mexico President Andrés Manuel López Obrador, depriving him of a bully to blame for an immigration policy tougher than the one he promised. 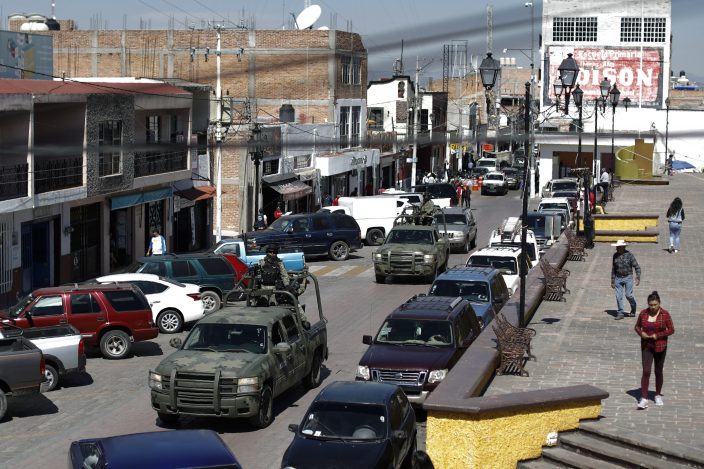 FILE - In this Feb. 10, 2020 file photo, National Guard patrol vehicles drive through the central square in Apaseo el Alto, Guanajuato state, Mexico. The two most powerful drug cartels in the hemisphere are battling over this industrial and farming hub of central Mexico — a state that has attracted gangs for the same reason it has lured auto manufacturers: road and rail networks that lead straight to the U.S. border. (AP PhotoRebecca Blackwell, File)

Mexico’s violence continues to confound López Obrador’s administration. The pace of murders has stabilized, but the toll remains high. The National Guard, the new security force that he promised would help turn the tide, was initially diverted in part to deal with migrants and has been unable to significantly reduce violence between battling drug cartels.

The persistent violence is a concern to U.S. authorities, both for its ties to drug trafficking and as a potential driver of immigration. Mexico might expect greater recognition of shared responsibility from a Biden administration, but Mexico’s own security strategy has been difficult to decipher.

“It’s putting Mexico at a more vulnerable position than otherwise had (López Obrador) actually taken more of a concerted, organized line about security in Mexico,” said Gladys McCormick, a history professor at Syracuse University specializing in the U.S.-Mexico relationship. 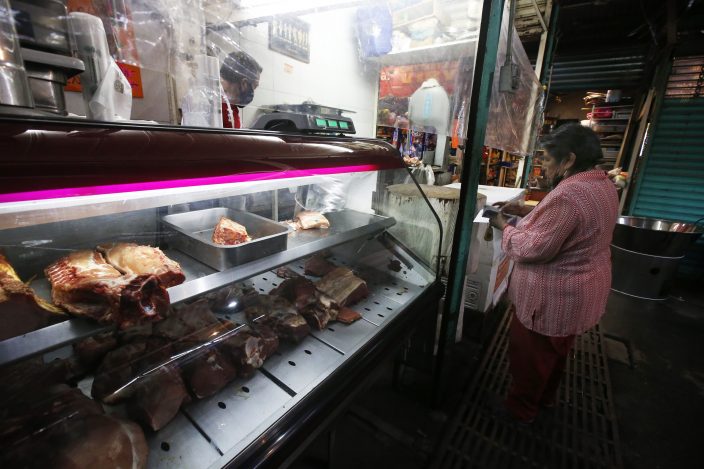 Josefina Rodriguez uses coupons provided by the municipality of Iztapalapa to buy meat at a corner shop in Iztapalapa, Mexico City, Thursday, Oct. 8, 2020. The municipal government of Iztapalapa is providing coupons to help poor families cope with the hardship created by the new coronavirus pandemic economic slowdown. (AP PhotoMarco Ugarte)

In his first campaign, Trump said the North American Free Trade Agreement with Mexico and Canada was a bad deal and promised to get a new one. He did, signing the U.S.-Mexico-Canada Trade Agreement this year.

López Obrador’s hopes of dragging Mexico out of recession depend in large part on a quick recovery by the U.S. economy. With that in mind, he made the first foreign trip of his presidency to Washington, visiting Trump in July. The deal was already signed, so there was little reason to travel during the pandemic other than to bolster the unexpectedly friendly relationship between the two populist leaders from opposite ends of the ideological spectrum.

The trip did rankle Democratic lawmakers however, because Mexico declined invitations to meet with House Speaker Nancy Pelosi and other Democrats who had helped get the trade deal through Congress.

“We saw it as very odd that they weren’t going to reach out to the speaker of the House,” especially since Democrats had been defending Mexico against Trump’s attacks, said Texas Democratic Congressman Henry Cuellar, who reminded Mexican officials then that the Democrats could soon be back in the White House.

López Obrador has seemed to work so hard to build rapport with Trump that some Mexicans speculate he may secretly hope for Trump’s re-election. López Obrador, however, has been careful to stay out of the U.S. race. When the Mexican leader took office two years ago, analysts predicted fireworks between the two strong personalities. But that never happened.

Mariana Aparicio Ramirez, coordinator of the Binational Observatory at Mexico’s National Autonomous University, suggested a more concrete reason López Obrador might be uncomfortable with a Democratic administration: “The issue of environmental policy is something that could absolutely be questioned.”

López Obrador has invested in propping up Mexico’s heavily indebted state-owned oil company and his administration has shown disdain for renewable energy projects. It's currently building a new oil refinery that many experts question.

But a Biden administration could offer more welcome positions on some of Mexico’s top priorities.

Mexico is also concerned about more than 4 million of its citizens living in the United States without legal status. The Trump administration has focused on deporting undocumented immigrants and narrowing the path to legal entry. Biden has said he would continue to let immigrants who were brought to the U.S. illegally as children stay and has talked about opening a path to citizenship for others.

“It’s all very complicated,” said 38-year-old Mexican businessman Eder Nicia. “It doesn’t depend on one person ... It’s not like X candidate is going to come in and everything will be fixed.”