Injuries are catching up with the Carolina Panthers' defense.

A unit that was young and thin to begin with has regressed over the last two weeks after making solid strides during a three-game winning streak when it limited opponents to a combined 53 points.

Injuries are a big reason why. 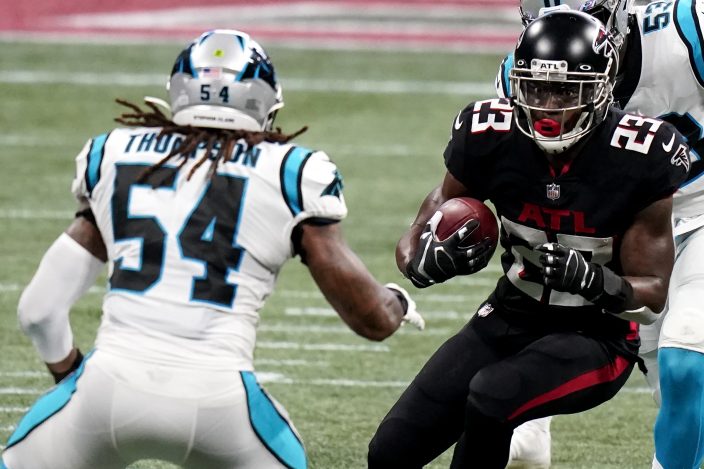 Atlanta Falcons running back Brian Hill (23) runs toward Carolina Panthers outside linebacker Shaq Thompson (54) during the first half of an NFL football game, Sunday, Oct. 11, 2020, in Atlanta. (AP PhotoBrynn Anderson)

That's four starters out — and top cornerback Donte Jackson has been in and out of the lineup with a toe injury.

On Sunday, the Saints scored on five of their first six drives and converted 12 of 14 third-down opportunities, scoring touchdowns on all three trips into the red zone. They held 9-minute edge in time of possession and never punted. 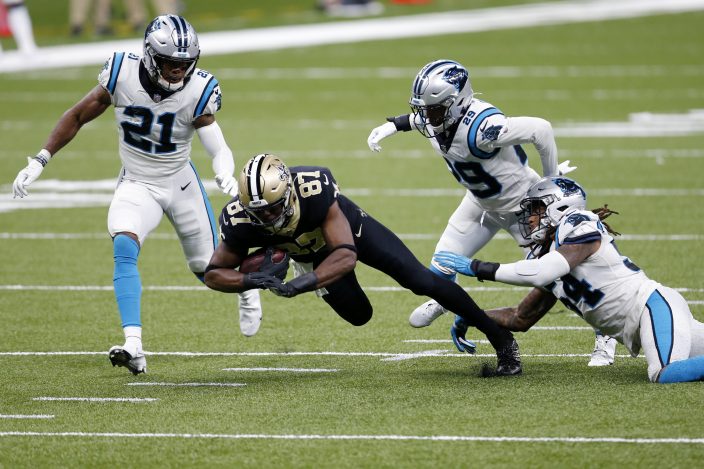 “They won versus man to man,” Panthers coach Matt Rhule said. “In the first half they were 6 of 6 on third down and 3 of 3 in the red zone. So, areas that we pride ourselves on.”

With the exception of a strip-sack by Brian Burns, the Panthers couldn't slow down Drew Brees, even though the veteran signal caller was without top wide receivers Michael Thomas and Emmanuel Sanders. He completed 29 of 36 passes for 287 yards and two touchdowns, and the Saints racked up 138 yards on the ground.

“We just have to be able to help our offense out,” linebacker Shaq Thompson said. “The offense played great. Defense, we played good at times, but their third down killed us. If you don’t win on third down, it’s going to be a long game and that’s what happened.” 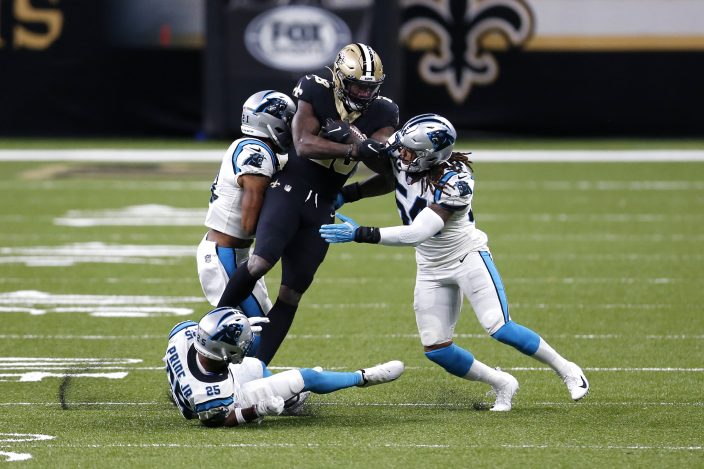 The Panthers (3-4) struggled in bringing down Alvin Kamara, who routinely broke through arm tackles.

“We have to tackle, run our feet, wrap up and get him down,” Thompson said.

D.J. Moore turned in his best game of the season, hauling in four catches for 93 yards and two touchdowns, including a 74-yard strike where he got behind the defense. Moore now has exactly 93 yards receiving in each of his last three games, and is averaging 21.4 yards per reception during that span.

The Panthers desperately need Christian McCaffrey back in the lineup, but the 2019 All-Pro running back is only expected to play Thursday night against Atlanta if he's deemed 100% healthy. Otherwise, the Panthers will give their franchise running back another 10 days to make sure his high ankle sprain is completely healed. He's missed five games so far. Fill-in starter Mike Davis was limited to 12 yards rushing and 24 yards receiving by the Saints.

Burns. He's quietly turning into one of the better pass rushers in the league, getting his third strip-sack of the season. The problem for the Panthers is they aren't getting much help on the other side and he's getting double-teamed more often than not. The Panthers are tied for last in the league with six sacks.

Teddy Bridgewater's decision making. Bridgewater played a solid game against the Saints up until taking a sack on third down late in the fourth quarter with Carolina trailing 27-24 — a miscue that essentially moved the Panthers outside of realistic field-goal range. On fourth-and-19, the Panthers attempted a 65-yard field goal which Joey Slye barely missed.

The Panthers appeared to make it through Sunday's game without any more major injuries. The return of WR Curtis Samuel was a big help, as he's become a big-time playmaker on third downs. Samuel had six catches for 48 yards and also ran for a 5-yard touchdown. Samuel missed Carolina's Week 6 loss to the Bears with a knee injury and had been listed as questionable for the Saints game, but showed good mobility during the game.

“He does everything that we ask him to do,” Bridgewater said.

56.3 — Percentage of third-down conversions allowed this season by Carolina's defense, which ranks 31st in the league.

The Panthers will look to get back on track against a Falcons team that can't seem to hold a lead. Carolina won at Atlanta three weeks ago 23-16 with Bridgewater throwing for 313 yards and two touchdowns, and Davis piling up 149 yards from scrimmage. Davis' past success against the Falcons might be another reason for the team to consider resting McCaffrey another week.

Even in a year during which the NB ...