Remy Heberlein’s grandmother joked he shouldn’t touch the Stanley Cup with chocolate on his hands.

The 3-year-old whose leukemia is in remission was sad he couldn’t touch hockey’s holy grail at all, but that didn’t stop his eyes from lighting up at the sight of it. He and older brother Charlie echoed their father in yelling “Go Bolts!” while waiting for their time with the Cup, which came after months of isolation and Remy’s recent round of steroids.

This wasn’t like any other year when the NHL champions could take the Stanley Cup wherever they want. This visit to the Children’s Cancer Center in Tampa, Florida, was staged outside, where Tampa Bay Lightning players Steven Stamkos and Ryan McDonagh kept alive one of the sport’s greatest traditions despite a pandemic and brought some joy to families going through a harder fight than the competition for the 35-pound chalice. 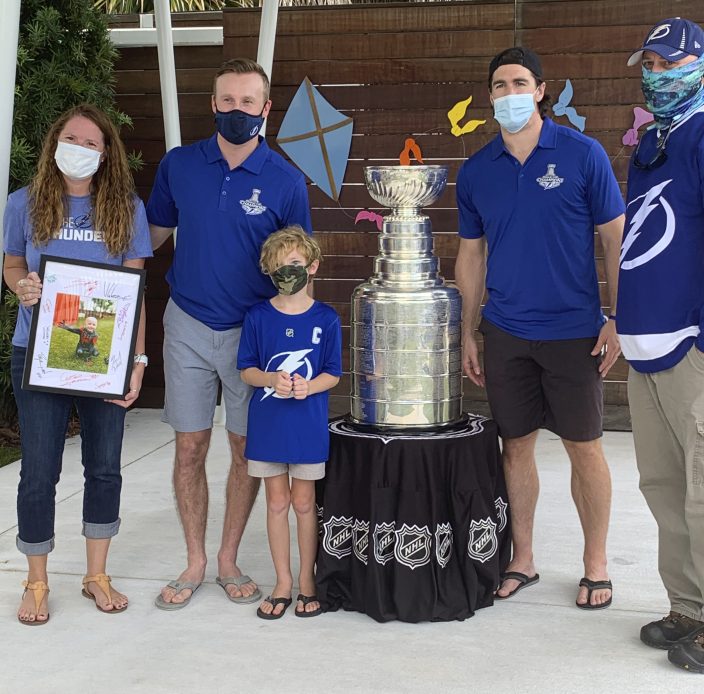 Christen, left, and Jim Gray, right, and son Declan , third from left, pose with the Stanley Cup with Tampa Bay Lightning players Steven Stamkos, second from left, and Ryan McDonagh, second from right, at the Children’s Cancer Center in Tampa, Fla., on Oct. 16, 2020. Christen holds a framed picture of her youngest son, Finn, who died from Ewing’s Sarcoma in January. The Lightning took the Stanley Cup to the Children’s Cancer Center as part of their local tour of stops after winning the National Hockey League’s championship trophy Sept. 28 in Edmonton, Alberta. ( Kristina HjertkvistTampa Bay Lightning via AP)

“It’s difficult times right now and you’re trying to navigate that, but you still want people to feel that happiness that that thing brings whenever you’re around it,” Stamkos said. “When you dream of winning the Stanley Cup, you want to share it with as many people as possible and especially people that maybe are going through a tough time and that can really brighten up your day.”

After returning to Tampa from their playoff “bubble” in Edmonton, Alberta, and parading the Cup along the Hillsborough River, Stamkos tried to figure out how to take the trophy safely to kids and their families.

Officials from the team and Children’s Cancer Center and the keepers of the Cup came up with an intricate plan: a 90-minute outdoor gathering with hand sanitizer stations and families waiting in their cars until their 3 minutes with players and the trophy. Everyone had to wear masks except during family Cup photos, with the players stepping away. 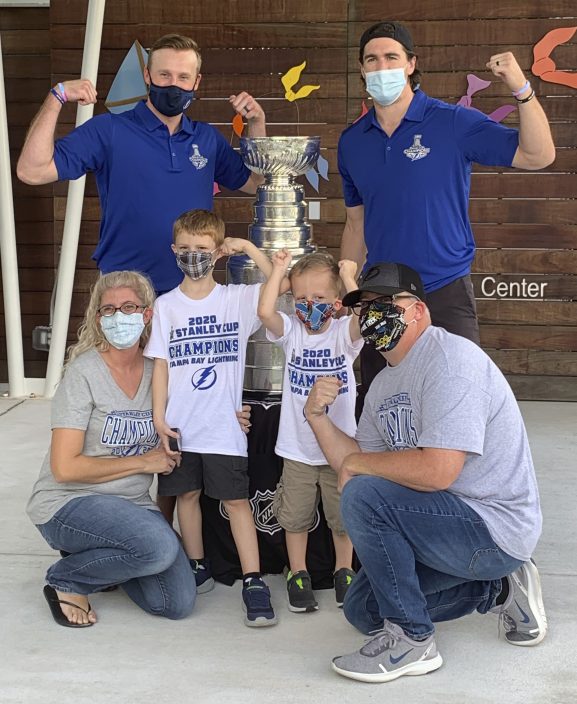 “You have your normal protocols that everybody adheres to for COVID, but we’re dealing with immuno-compromised children,” said Patty O’Leary, executive director of the center.

Phil Pritchard and other keepers of the Cup added an extra, silversmith-approved cleaning step to wipe off bacteria and ensure the coronavirus doesn’t spread through contact. He and Hockey Hall of Fame colleague Craig Campbell wore their trademark white gloves that now serve as additional protection.

“We’re trying to keep it as clean as possible,” Pritchard said. “The less people we have touching it, I think the better.” 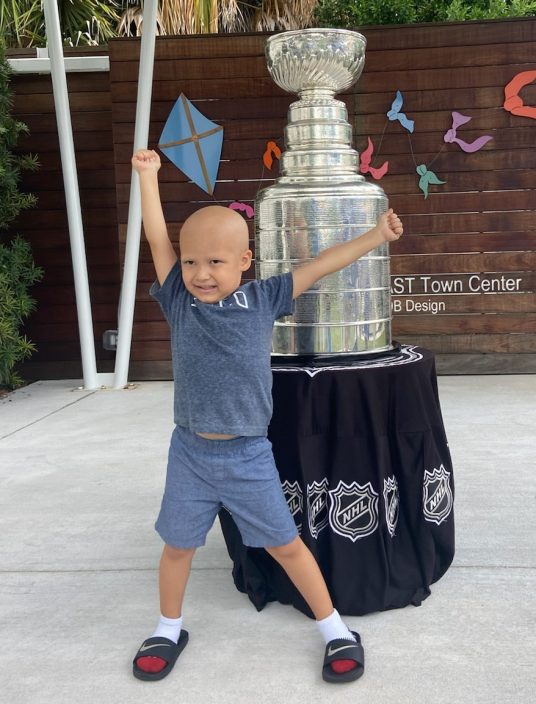 Kameron Bush, 3, poses with the Stanley Cup at the Children’s Cancer Center in Tampa, Fla., on Oct. 16, 2020. The Tampa Bay Lightning took the Stanley Cup to the Children’s Cancer Center as part of their local tour of stops after winning the National Hockey League’s championship trophy Sept. 28 in Edmonton, Alberta. (Kristina HjertkvistTampa Bay Lightning via AP)

That was OK with Christen and Jim Gray and their 8-year-old son, Declan, one of 21 families chosen out of the more than 1,000 the center helps with educational, emotional and financial needs. They’re not in active treatment now but rather bereavement after their 6-year-old, Finn, died in January of Ewing’s sarcoma, a rare form of bone cancer.

Her eyes welling up as soon as they arrived, Christen carried a framed photo of Finn, while Jim brought with him the puck that fell at his son’s seat when he and Declan attended a Lightning game about a week after Finn’s death. He carries it everywhere and told Stamkos and McDonagh, who signed the puck.

“They really, truly seemed to be very touched,” Christen Gray said. “When you’re going through the hardest, most difficult journey in life, to have moments where you can just relax and enjoy and laugh and be a family and have somebody to cheer for, it really just showed.”

“You had kids that just finished at the clinic with six hours of chemo and they came,” said Sharin Nelson, the center’s director of programs and family services. “They were willing to come out with their mask and everything else on just so that they could come and meet the players and see the Cup and take part in the celebration.”

There’s a celebration everywhere the Cup goes, from the rink to schools, from police to fire stations, and now the Children’s Cancer Center.

“All those people are going through some really tough times and then you throw a pandemic on top of that,” Stamkos said, “so for the few minutes that each family was around that Cup, just to see them just admire it and have fun and take pictures and laugh and smile, it was pretty rewarding.”

“One Good Thing” is a series that highlights individuals whose actions provide glimmers of joy in hard times — stories of people who find a way to make a difference, no matter how small. Read the collection of stories at https://apnews.com/hub/one-good-thing

Piqué likely out for several months because of knee inj ...

The midday arrival of a school bus ...