An airstrike on a rebel training camp in northwestern Syria on Monday killed more than 50 Turkish-backed fighters and wounded nearly as many, in one of the heaviest blows to the opposition's strongest groups, a spokesman and a war monitor said.

The opposition blamed Russia for the daytime strike and vowed to retaliate for the attack on Faylaq al-Sham.

Russia and Turkey, although they support opposite sides in Syria's conflict, have worked together to maintain a cease-fire in the last enclave of Syria's rebels, centered on the province of Idlib. But the attack comes as relations between the two countries have shown signs of strain over Turkey's increased military involvement in a region stretching from Syria to the Caucasus and the Mediterranean. 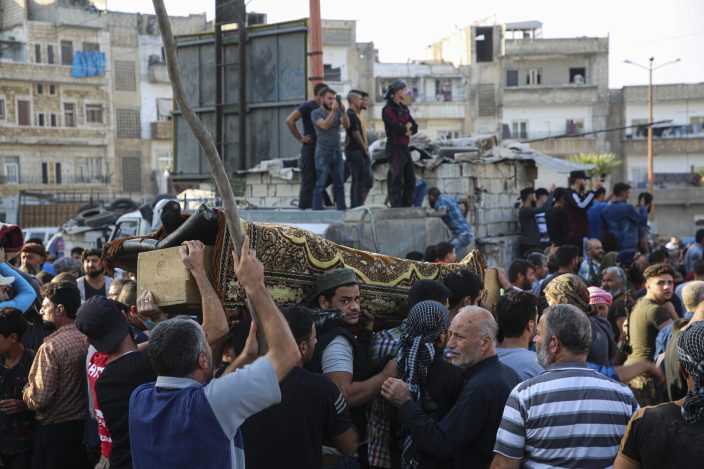 People attend funeral of fighters killed in an airstrike in the town of Idlib, Syria, Monday, Oct. 26, 2020. An airstrike on a rebel training camp in northwestern Syria on Monday killed dozens of Turkish-backed fighters and wounded nearly as many, in one of the heaviest blows to the opposition's strongest groups, a spokesman and a war monitor said. (AP Photo)

There was no immediate comment from Russia or Turkey on the strike.

Youssef Hammoud, a spokesman for the Syrian opposition, said the airstrike targeted a military training camp for Faylaq al-Sham in Idlib. Faylaq al-Sham is the largest and one of the best disciplined and trained of the Turkish-backed armed factions in the opposition. Its fighters provide security for Turkish troops deployed in northwest Syria.

The Russian state-funded news agency Sputnik said the Syrian air force was behind the strike. It called out Faylaq al-Sham as the largest Syrian group to dispatch fighters to foreign conflicts. 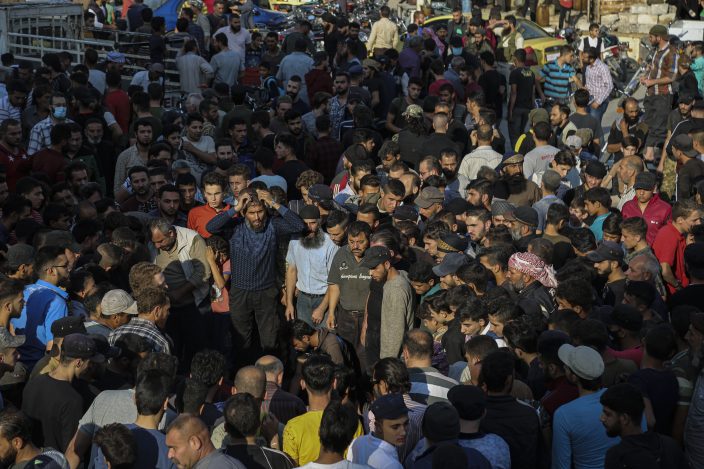 People attend funeral of fighters killed in an airstrike in the town of Idlib, Syria, Monday, Oct. 26, 2020. An airstrike on a rebel training camp in northwestern Syria on Monday killed dozens of Turkish-backed fighters and wounded nearly as many, in one of the heaviest blows to the opposition's strongest groups, a spokesman and a war monitor said. (AP Photo)

Turkey firmly backs Azerbaijan in that country's conflict with Armenia over the Nagorno-Karabakh region, sending it weapons and — reportedly — deploying allied Syrian fighters there. Ankara denies that claim, but Moscow has criticized it for sending fighters. Russia has military agreements with Armenia but is also trying to maintain warm ties with Azerbaijan.

Turkey and Russia also back rival sides in Libya, where they have sent Syrian and Russian fighters as proxies. In Syria, Russia is a close ally of President Bashar Assad and its military backing helped tip the 9-year-old civil war in his favor.

Monday's strike was the deadliest in Idlib since the Turkish-Russian-brokered truce there came in to effect earlier this year — and it raises fears that truce could further fray.

Hammoud said more than 50 fighters were killed. The National Front for Liberation — the umbrella group of Turkish-allied factions — said only that a large number died, without specifying. The Britain-based Syrian Observatory for Human Rights, which monitors the war in Syria, put the toll at 78 fighters dead and nearly 90 wounded.

“We, the factions of the National Front for Liberation, will respond to these violations,” said Naji al-Mustafa, another spokesman for the Front, threatening to target government and Russian positions. He called the strike a “crime” by Russia.

Hundreds of Idlib residents took part in a collective funeral for 10 of the fighters Monday, some firing their guns in the air.

The Faylaq al-Sham camp, at Jebel al-Dweila not far from the Turkish border, was hosting training sessions for new recruits when it was struck, according to a war monitor and another opposition spokesman. Leaders of the camp were among those killed, according to Hammoud.

Journalists or activists in the area were not allowed near the camp and the extent of the damage was not immediately known.

A hospital near the explosion was overwhelmed with the casualties and was forced to send wounded and dead to other facilities. A doctor in Idlib city said the city's central hospital, more than 24 kilometers ( 15 miles) from the camp, received two bodies and 11 wounded. All the casualties were fighters, the doctor said, speaking on condition of anonymity because he was not allowed to discuss the attack on an armed group. One media activist, Rashid al-Bakr, was among those killed, according to the Macro Media Center, an online news platform.

One Facebook group called on Idlib residents to check with hospitals in the city if they are missing relatives, a clear indication many remained unidentified.

The truce brokered by Turkey and Russia brought a halt to a government offensive that had displaced hundreds of thousands in the already overcrowded enclave. Around a dozen Turkish observation points were deployed inside Idlib to monitor the truce.

But it has remained shaky, and in recent days there has been a resumption of strikes.

On Friday, airstrikes hit a local market for rudimentary fuel burners and diesel in the opposition-controlled region of Jarablus, in northern Aleppo. At least seven people were killed, according to the Observatory.

Last week, Turkish troops evacuated one of their largest military bases in the area, which had been surrounded by Syrian government troops for months. Syrian opposition fighters said it was part of Turkey's redeployment of its forces in the shrinking enclave.

Syria expert Charles Lister said the attack Monday should be seen within the heightened tension between Turkey and Russia in the region. He said it threatens to unravel the relative stability in Idlib and could lead to new waves of displacement.

Though contacts between the Turkish and Russian presidents could de-escalate the situation, he said, “it appears more likely that this could trigger some form of Turkish response aimed at reinforcing the deterrence” it has established with the truce earlier this year.

Kurdish-led authority releases dozen of Syrians from IS Camp

Russia delegation calls for conference on refugees in Syria