“You wouldn’t think he was a rookie if you watched him in practice,” defensive end Shaq Lawson said Monday, when the Dolphins returned from their bye weekend. "The kid is incredible, and I'm looking forward to going out there and playing with him Sunday. 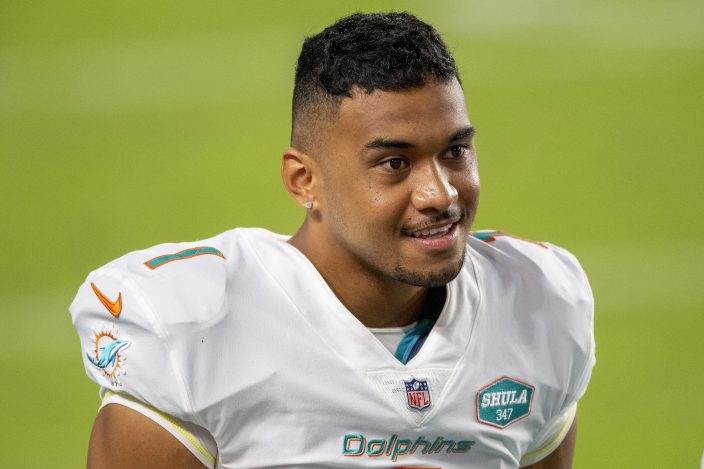 Miami Dolphins quarterback Tua Tagovailoa (1) smiles on the sidelines before playing for the first time against the New York Jets during an NFL football game, in Miami Gardens, Fla. Miami Dolphins coach Brian Flores says he regrets that his players found out about the team's switch to quarterback Tua Tagovailoa through social media rather than from him. And Flores says the decision to bench popular veteran Ryan Fitzpatrick was difficult.(AP PhotoDoug Murray)

“I've seen how athletic he is, how incredible a player he is. He's going to lead this team in the right way.”

The timing of the change was surprising because the Dolphins (3-3) have won their past two games, and the 37-year-old Fitzpatrick said his demotion left him heartbroken. 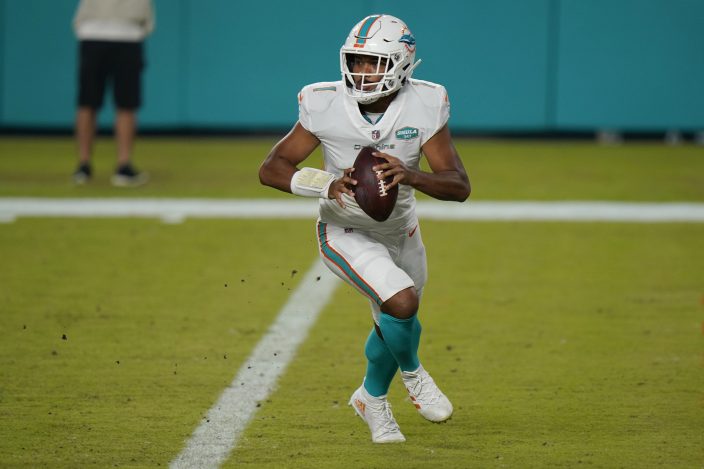 Miami Dolphins quarterback Tua Tagovailoa (1) looks to pass the ball during the second half of an NFL football game against the New York Jets, Sunday, Oct. 18, 2020, in Miami Gardens, Fla. Hopes are high Tagovailoa will be the best of the 22 quarterbacks to start for Miami since Dan Marino retired following the 1999 season. (AP PhotoLynne Sladky)

Even so, players who have spoken publicly regarding the change say they're excited about Tagovailoa becoming the starter. That includes tight end Mike Gesicki, who is close to Fitzpatrick.

“Tua has done a phenomenal job earning everybody’s respect in the locker room,” Gesicki said. "Everyone has fun around him; he's a funny guy. And when he's out on the field he can flip a switch and make it serious.

“I look forward to seeing him making a big play — because you know it's eventually coming — and how he reacts to that. It's exciting to be part of that chapter.”

Flores said he explained the quarterback change to his players by simply saying it was best for the team, and he doesn't expect any disunity even if Tagovailoa struggles.

“The guys rally around each other,” Flores said. “They support one another. To think there would be division because a guy doesn’t play well, I don’t think we have that on this team. To even speak about it, it’s unfortunate anyone would go that route, but obviously people are thinking about it. But I don’t see that on this team.”

Flores waited until after Week 6 to make the change, and perhaps it was overdue. Two other first-round picks this year at quarterback, the Bengals' Joe Burrow and the Chargers' Justin Herbert, have been playing well and posted season-high yardage totals Sunday.

Tagovailoa, the fifth overall pick, made his NFL debut during mop-up time a week ago. It was his first game action since suffering a serious hip injury last November that ended his Alabama career.

He takes over an offense much improved from 2019, when Miami went 5-11 in Flores' first season. The Dolphins are on pace for their highest-scoring season since 1986, averaging 26.7 points per game, and they've won back-to-back games by 24 points or more for the first time since 1983.

Under Tagovailoa, the Dolphins hope their offense will be even more dynamic.

“He's everything you want in a quarterback,” receiver Preston Williams said. “Just like everybody else, I'm excited to see him in his first start.”

As 1st NFL start looms, Tua says he's not caught up in hype