The Browns had finally figured out how to best use Odell Beckham Jr.'s unique skills.

They're back at the drawing board now in Cleveland.

Beckham won't be a distraction or a weapon for quarterback Baker Mayfield for the rest of 2020 — at least. His season's over, and if the Browns are going to end the NFL's current longest playoff drought, they'll have to do without the star receiver. 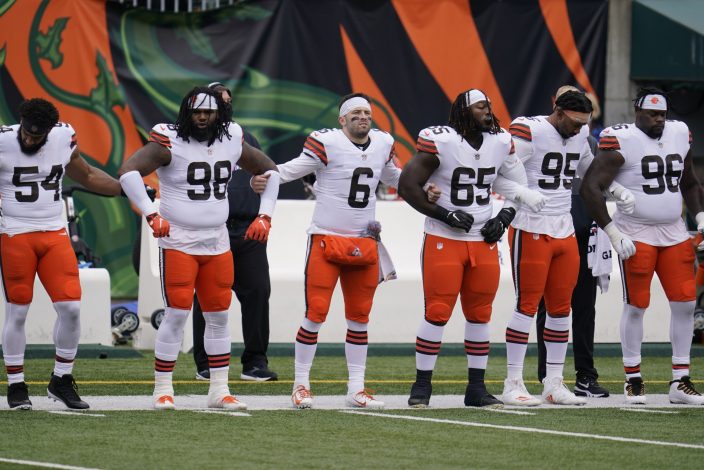 The polarizing three-time Pro Bowler, who said he had finally found some inner peace and comfort in Cleveland, suffered a season-ending left knee injury Sunday in Cincinnati. His loss will force Browns first-year coach Kevin Stefanski to tweak an offense that counted on Beckham's speed to stretch the field and stress defenses.

It's a necessary adjustment, and a painful one.

“We would rather do it with Odell, but the injury occurred, and I feel sick for him, but we will have to find a way,” said Stefanski, who has the Browns (5-2) off to their best start since 1994. “That is part of this business, just finding a way.” 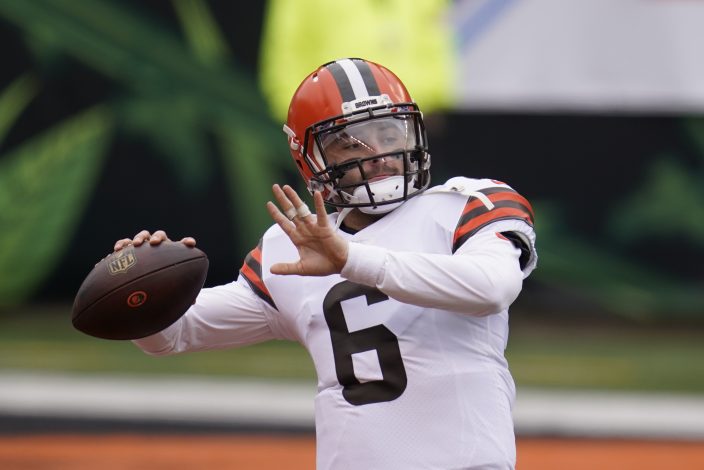 Replacing Beckham with one player isn't possible. So unless the Browns (5-2) want to trade for another elite receiver by next Tuesday's deadline, they'll need to rely more on their solid running game and a committee of young receivers to fill the void left by Beckham's absence.

It's interesting that after Beckham went down, Browns quarterback Baker Mayfield had one of the best games of his career. Mayfield threw an interception on his first pass — on the same play in which Beckham got hurt — for the second game in a row, but he recovered and completed 21 consecutive passes and threw five TDs.

Mayfield, who has been playing with a broken rib, reconnected with receiver Rashard Higgins (six catches) and may have found something in rookie Donovan Peoples-Jones, who hauled in his perfectly placed back-shoulder throw for the winning score with 11 seconds left.

“He is Mr. Reliable,” Stefanski said of Peoples-Jones, who had been returning kicks but came into Sunday's game without a catch. "He can line up anywhere, very intelligent player. And then see him go make a play with the ball in the air was outstanding. There are going to be opportunities for him moving forward just like that.”

While there's no denying Beckham's talent, there's also an argument that him being on the field has put more undue pressure on Mayfield to get him the ball. Mayfield won't have to worry about that for at least the rest of this season, but he also will be missing a receiver capable of drawing double-teams or turning a short gain into a long touchdown.

The playoffs are possible and Stefanski isn't going to let Beckham's injury alter where he wants the Browns to go.

“We hate that part of it, but as an offense and as a team, we do not adjust our expectations,” he said. “We want our offense to be able to move the ball down the field and score a bunch of points.”

The Browns will miss Beckham. How much remains to be seen.

Mayfield's record-breaking performance has temporarily eased concerns about the third-year QB's sporadic play. He's been great against bad teams, fair against average ones and mostly poor versus quality teams. After an 0 for 5 start Sunday, he was nearly perfect.

Other than the magnificent Myles Garrett, who had two more sacks, and cornerback Denzel Ward, Cleveland's defense lacks playmakers — despite leading the league with 14 takeaways.

Joe Burrow roasted the Browns' secondary for 406 yards and made it look easy. The Browns need someone other than Garrett to create some pressure up front.

“We just need to have a rush plan,” Stefanski said. “Whether we are rushing four or more, we have to be able to apply (pressure) and affect the QB.”

Rookie tight end Harrison Bryant filled in for Austin Hooper, who underwent an appendectomy on Friday, and caught two TD passes. Hooper may need another week to recover, giving Bryant more opportunity to show his stuff.

The fourth-round pick from Florida Atlantic has been impressive since training camp.

No one was more relieved at the end of the game than cornerback Terrance Mitchell, who dropped what could have been a game-sealing interception in the fourth quarter. Mitchell was also unable to break up some other completions when it appeared he was in good coverage.

Other than Beckham, and his is a biggie, Stefanski said the Browns had no other notable injuries. ... Pro Bowl running back Nick Chubb is eligible to return from the injured list this week after missing three games with a sprained knee, but with the bye week coming up, it's likely the Browns will wait before bringing him back.

The Browns will get back wide receiver Khadarel Hodge, who has been out since getting hurt in warmups at Dallas earlier this month.

Mayfield feeling outside pressure after brutal day at Pitt

Early results: Browns, Garrett off to flying start in 2020