The Jaguars (1-6) showed enough fight against the Chargers — they led 29-22 late in the third quarter — for Khan to stick with Marrone into the team’s bye week and quite possibly through the end of the season. 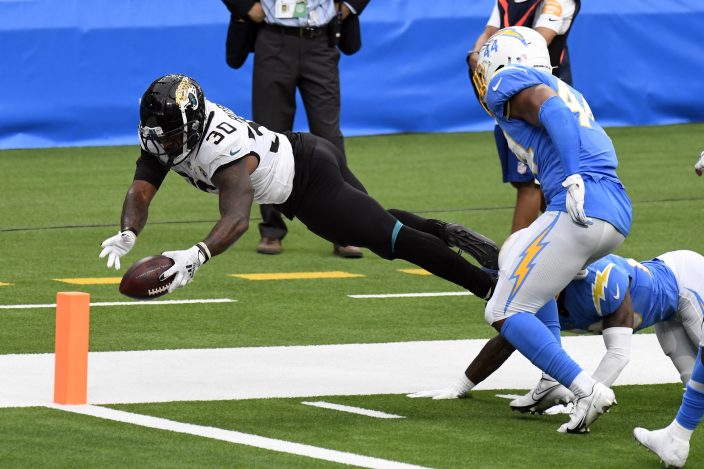 Jacksonville Jaguars running back James Robinson (30) lunges into the end zone for a touchdown during the first half of an NFL football game against the Los Angeles Chargers Sunday, Oct. 25, 2020, in Inglewood, Calif. (AP PhotoKyusung Gong)

“I think that any time you’re losing like this and you’re not performing well on Sundays, I think it’s naive. It can happen,” Marrone said. “I just work and do the best job I can for the coaches and players. …

“That’s just what this game is: work as hard as you possibly can, and at the end of the day, you have to hold your head up high knowing that you did everything you possibly could to try to win games while at the same time know that you did your best for the coaches and the players.”

Marrone is on the verge of coming up well short of the owner’s winning expectations. And the belief is that changes will ultimately be made if Jacksonville continues on its current path. It won't help that Marrone has the youngest team in the league and lost valuable offseason work because of the coronavirus pandemic.

He is 24-34 in three-plus seasons in Jacksonville, falling a few plays shy of the franchise’s first Super Bowl in 2017 and then miring mostly in mediocrity since. The Jaguars have dropped 12 of their past 15, including 10 by double digits.

“I can tell you this: we all feel bad,” Marrone said. “The one thing you know, that’s out there on the field, is that they are playing as hard as they can. We’re just not making the plays we need to make. That’s on all of us. That starts with me.”

The past month has been far from ideal. Miami, Cincinnati and Houston got their first wins of the season against the Jags in consecutive weeks. Detroit followed with a lopsided victory in Jacksonville, and then Chargers rookie quarterback Justin Herbert picked up his first win in five starts Sunday.

“It hurts, but I wouldn’t say we’re discouraged,” Jaguars quarterback Gardner Minshew said. “I think everyone is looking for a solution still and it’s a fight. It’s tough right now, but as long as these guys keep fighting, we’ll figure it out.”

Running back James Robinson is the team’s most consistent player on either side of the ball, and it’s not even close. The undrafted rookie totaled 137 yards from scrimmage and two touchdowns against the Chargers. He had a career-high 119 yards rushing and showed plenty of determination on his 9-yard TD reception.

The defense remains a mess. The unit gave up a whopping 1,878 yards in losses to Cincinnati, Houston, Detroit and the Chargers. That's the most for any four-game stretch in franchise history.

The only positive is it’s starting to get more pressure with Josh Allen returning from a knee injury and rookies K’Lavon Chaisson and DaVon Hamilton flashing at times.

Hamilton finished with eight tackles and two quarterback hurries in his second career start, more signs of progress for the third-round draft pick from Ohio State. It would be somewhat surprising if the Jaguars didn’t stick with him when veteran and team captain Abry Jones (ankle) returns from injured reserve.

DJ Chark has 11 catches for 87 yards and no touchdowns in the past three games, looking nothing like a Pro Bowl player or the team’s go-to guy. He had one reception for 26 yards against the Chargers (despite a team-high seven targets) and seemed to express his frustration after several of Minshew’s off-target throws.

Receiver/returner Dede Westbrook was having tests Monday to determine whether he tore the anterior cruciate ligament in his left knee against the Chargers. Guard A.J. Cann (shoulder), linebacker Myles Jack (ankle), safety Jarrod Wilson (hamstring) and tight end Tyler Eifert (neck) are expected back after the bye.

6 — the number of losing streaks that reached at least six games since Khan bought the Jaguars before the 2012 season. He’s had at least one such skid in six of his nine seasons.

Get healthy on defense during the bye to at least have a shot against Houston on Nov. 8.

Jags on verge of tying another franchise record for futility

Jaguars go cross-country to face QB they should have drafted

Another defensive debacle vs another winless team for Jags