You may have heard that Chip Ganassi likes winners. It's his catchphrase, his slogan for his drivers, and the brand he's established for his race teams.

In this 30th anniversary season for Chip Ganassi Racing, the boss is celebrating another winner: Scott Dixon won his sixth IndyCar title to give Ganassi a 20th championship ring as a team owner.

“Big Boom!!!!” Ganassi posted to Twitter after Dixon sealed the title in Sunday's season finale in downtown St. Petersburg. He closed with his signature ‘#ilikewinners’ at the end of the post. 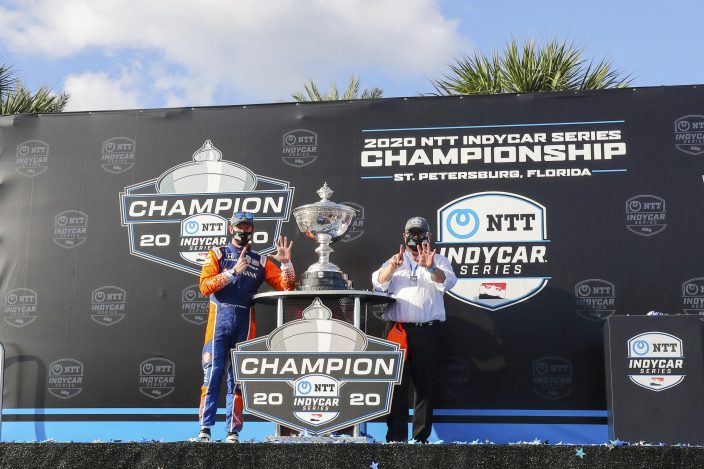 It's not been an easy year for Ganassi, who started the season miserably sitting in his Pittsburgh home while IMSA rang the opening bell at the Rolex 24 of Daytona. Ganassi before 2020 shuttered the dominant sports car program that had won seven championships — his manufacturer is taking a break from the series — and Ganassi hated not having cars in the first show of the season.

Then the pandemic hit and racing — his only business — was on hold. It was a contract year for Kyle Larson with Ganassi's NASCAR team and an expensive bidding war was expected. Then Larson used a racial slur while participating in an online event and Ganassi had to fire him.

Things didn't start to pick up until June, when his storied IndyCar program finally got on track. Team owners are permitted in IndyCar's “bubble” at the track — in NASCAR they are not — and Ganassi could at last get to a race. Dixon won the first IndyCar race of the season, then the second, then the third. The fourth race was won by Felix Rosenqvist, giving the Ganassi team four consecutive wins and a strong command of the championship race.

Dixon at one point built a 117-point lead, a cushion he needed when 2019 winner Josef Newgarden made a late charge. Newgarden won Sunday's season finale, which was basically his only path to keeping his title, but Dixon shadowed him the entire day to finish third with a safe and smooth strategy.

He said he saw concern on Ganassi's face in the buildup to the race, but Dixon joked the boss had nothing to worry about. Dixon is as steady as they come and Ganassi ends every meeting encouraging his teams to “do the obvious things right.” 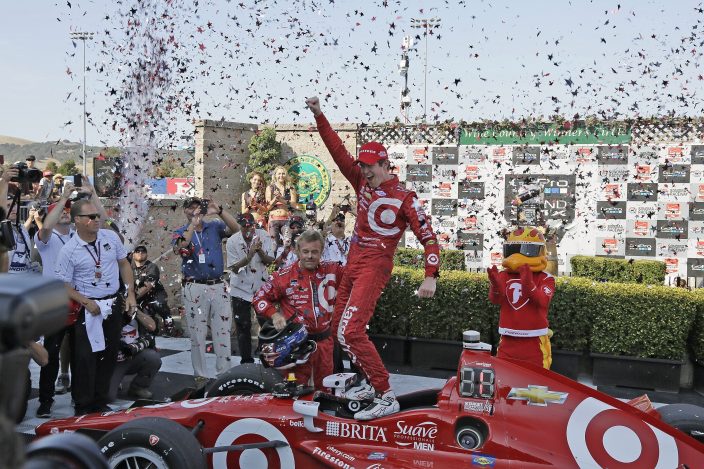 “He always goes into, ‘Visualize yourself getting that checkered flag first. Visualize the pit stops going smoothly,’” Dixon said. “He always has great words of encouragement. Before I got in the car, he just said, ‘Don’t worry, just do what you do.’”

Ganassi is gruff and indisputable, very clear in his wants. Win races and keep your head down are Ganassi's demands, and follow those instructions or your time with the team will be short. Rosenqvist, a young talent, is reportedly out after two seasons and just one win.

But coming in for 2021 is seven-time NASCAR champion Jimmie Johnson, who has joined the Ganassi list of champions that includes Dixon, Dario Franchitti, Juan Pablo Montoya, Alex Zanardi and Jimmy Vasser.

Johnson will run IndyCar road and street course races for Ganassi in a new No. 48 entry with funding from Carvana, a company brand new to motorsports. Johnson and Dixon have 13 driver titles between them and are regarded as the best of their generation.

Ganassi has been impressed with Johnson's work ethic and commitment to put together a competitive IndyCar program. He likes hard workers.

He noted Johnson flew from North Carolina to St. Petersburg to spend all day Saturday at the track immersed with the team. Johnson was ready to work upon his 7:30 a.m. arrival.

“He’s on the phone, on the computer, in front of the data, looking at data all the time,” Ganassi said. “It became very apparent very quickly why this guy’s a champion. It’s such a breath of fresh air to have a guy like that come in the door who’s going to push us.”

Fielding championship teams has gotten harder as sponsorship opportunities have shrunk. Ganassi has not been immune.

He was funded by Target for 27 years in a partnership that was the envy of motorsports. The job became much harder when Target pulled out of racing and sponsorship became a larger factor in driver hirings than Ganassi prefers.

He's said little about Rosenqvist or the No. 10 entry, but he's presumably looking for a driver who brings some money to fill the car. On the NASCAR side, he promoted Ross Chastain from the Xfinity Series to drive Larson's car next year.

The Chastain move was delayed by a devastating financial blow delivered before the 2019 season when the FBI raided sponsor D.C. Solar. The company was heavily invested in Ganassi's NASCAR arm and Ganassi had to close the Xfinity team earmarked for Chastain.

Ganassi is operating much leaner than he was from 1996-99 when Vasser, Zanardi and Montoya collected four consecutive championships followed by a Montoya Indianapolis 500 win the next year. He's still in the game, though, playing the cards he has right now, right here, at this very moment.

Ghana heads to polls next week as democracy tested in r ...

Ghanaians head to the polls for ge ...