Interim coach Romeo Crennel was asked what’s next for the Houston Texans after yet another loss this weekend dropped them at 1-6.

“We’ll have to go back to the drawing board, back to square one and probably start again,” he said. “And see what we can do down the stretch.”

Houston was dominated by Green Bay 35-20 on Sunday for Crennel’s second straight loss after he led the Texans to a win over Jacksonville in his debut in the wake of coach Bill O’Brien’s firing. 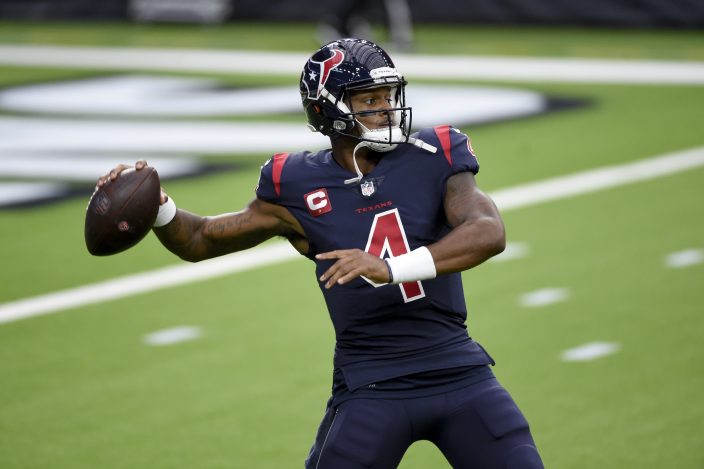 The Texans seemed overwhelmed from the start against the Packers. They were down 21-0 by halftime and had no chance of digging out of the early hole.

Houston held the Packers to 96 yards rushing with Aaron Jones out with an injury a week after allowing a season-high 263 yards rushing in an overtime loss to Tennessee. But the improvement against the run was negated by the team’s terrible pass defense against the Packers.

Top cornerback Bradley Roby was injured on Green Bay’s first series and the rest of the secondary had no answer for Davante Adams, who had a career-high 196 yards receiving with two touchdowns.

“Defensively, we’re inconsistent,” Crennel said. “We did do better against the run overall, but then we got killed in the passing game. So that’s a sign of inconsistency.”

Defensive end J.J. Watt was visibly upset after the team’s bad performance on Sunday. He was asked about his level of confidence in the defense on Sunday after Houston gave up more than 30 points for the fifth time this season.

Quarterback Deshaun Watson continues to make the team’s passing game the bright spot in this dismal season. Watson threw for 309 yards and two touchdowns on Sunday for his fourth straight 300-yard passing game. He ranks second in the NFL with 2,095 yards passing and hasn’t thrown an interception in two games.

The Texans need to improve in virtually every area except the passing game, but the biggest problems are the running game and run defense. Houston ranks last in the NFL by averaging just 84.9 yards rushing and is 31st in run defense by giving up 165.9 yards.

RB David Johnson continues to struggle in his first season in Houston after being traded from Arizona in the deal for DeAndre Hopkins. Johnson managed just 42 yards rushing and lost a fumble after a reception in the fourth quarter. His inability to run effectively has contributed to Houston’s problems in the red zone. On Sunday in the fourth quarter, he was stopped for a loss of 3 yards on third down from the 8 to limit the Texans to a field goal after they had great field position from a blocked punt.

Roby is being evaluated for ankle and knee injuries and Crennel said Monday that he wasn't sure how long he would be out. ... Crennel expects TE Jordan Akins to return after this week’s bye after missing three games with a concussion.

22 — The Texans signed left tackle Laremy Tunsil to a three-year, $66 million contact extension this offseason to stabilize the offensive line. But so far the unit has struggled and Watson has been sacked 22 times, which is the sixth most in the NFL.

The Texans will take their bye week to regroup and search for ways to improve before visiting the Jaguars on Nov. 8.

Crennel and his staff will spend the week evaluating what has happened so far and working on solutions to the team’s many problems.

“We need to be more consistent,” Crennel said. “Sometimes you see guys that make really good plays and then other times guys, they make plays that are not-so good. I would like to see this team become a more consistent team down in and down out and be able to play it throughout the game on a consistent level.”

Texans looking for improvement after getting first win

Houston Texans do little right as they lose to Chiefs again