Albania's prime minister said Monday that four children and a woman, all related to Albanian nationals who joined Islamist extremist groups fighting in Syria and Iraq, are being repatriated from a Syrian camp.

Edi Rama told The Associated Press in a telephone interview from Beirut, Lebanon, that the return of the five was arranged after 12-month negotiations, and that his government also hoped to secure the repatriation of other Albanian nationals stuck in Syria in similar circumstances.

All five were taken to Beirut Monday, where Rama had dinner with them, and were due to fly back to the Albanian capital of Tirana Tuesday. 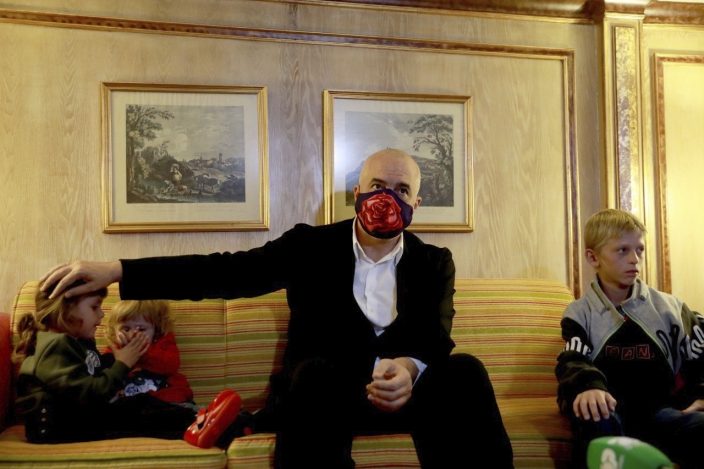 In this photo provided by the Albanian Prime Minister's office, Albania's Prime Minister Edi Rama sits at a hotel in Beirut, Lebanon, Monday, 26, 2020, with Albanian children as part of an operation to take them back home to Albania from Al Hawl, northern Syria. A few hundred Albanian men are known to have joined terror groups in Syria and Iraq in the early 2010s, and now many of them are dead and their family members are stuck in Syria camps, but will be repatriated via Beirut to Albania. (Albanian Prime Minister's office via AP)

“It has been a complicated year's work," Rama said. He declined to provide details on the negotiations so as not to endanger efforts to secure the return of other Albanian fighters' families.

He added that the woman uses a wheelchair as a result of injuries and will require immediate and difficult surgery once back in Albania. All five lived in the Al Hawl refugee camp in northern Syria.

A few hundred Albanian men joined the Islamic State and other groups fighting in Syria and Iraq in the early 2010s. Many were killed, and their wives and children are stuck in Syrian camps.

Rama could not give the exact number of Albanian nationals in the camps. Relatives who remained in Albania say 52 children are in the camps.

“We are first committed in taking care of the children and the women not involved in terror acts,” Rama said. He added that Albanian nationals who took part in the fighting would face criminal prosecution if they are detained and repatriated.

“We are trying to bring every Albanian back home,” he added.

About two-thirds of Albania’s 2.85 million people are Muslims.