Even as Michigan closed the 2019 season with dispiriting losses to Ohio State and Alabama, there were some encouraging signs for the Wolverines on offense.

The Wolverines began this pandemic-delayed 2020 season with a 49-24 rout of Minnesota on Saturday night. Quarterback Joe Milton was solid after taking over as the starter, and he was aided by a running game that produced 256 yards. 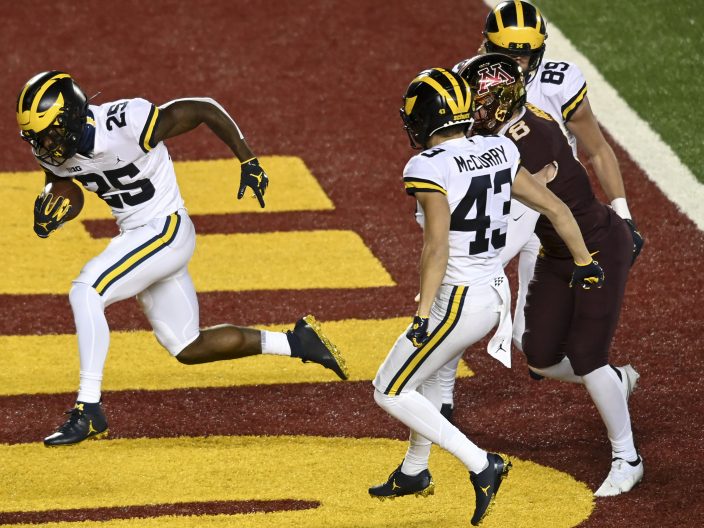 Michigan running back Hassan Haskins (25) runs for a touchdown in the first half of an NCAA college football game against Minnesota Saturday, Oct. 24, 2020, in Minneapolis, Minn. (Aaron LavinskyStar Tribune via AP)

“A lot of things to be impressed with,” coach Jim Harbaugh said Monday. “Execution was really good — very good, especially for our first game.”

The Wolverines moved up five spots to No. 13 in the AP poll after winning easily in perhaps the most anticipated game of the Big Ten's opening week. Now in Harbaugh's sixth season, Michigan hasn't lived up to the loftiest expectations from when he was hired, but the Wolverines have kept tinkering, trying to reach a level that would put them on more even footing with rival Ohio State.

Last year was the first at Michigan for Gattis, and the transition wasn't all that smooth. Despite having an experienced quarterback in Shea Patterson, Michigan was blown out early in the season by Wisconsin, then managed only 10 points in a win over Iowa. 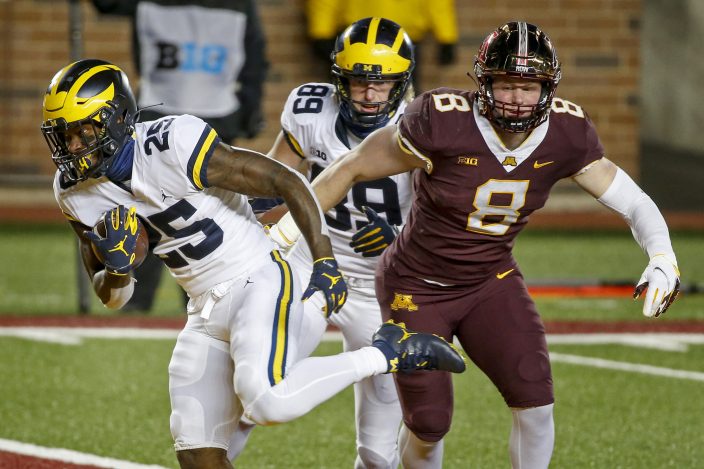 The Wolverines finally broke through in a 45-14 victory over Notre Dame, the first of four straight games in which Michigan scored at least 38 points. The Wolverines were routed by Ohio State and lost by double digits to Alabama, but they did manage nearly 400 yards of offense in each of those games.

Minnesota's defense isn't exactly comparable to Alabama's, but with a new starting quarterback and losses throughout the offense, it wasn't hard to envision Michigan struggling in the opener. Instead, the Wolverines put up 35 first-half points. After its first drive was derailed by a penalty, Michigan's next 10 possessions ended with either a touchdown or a field goal attempt.

“All four of our running backs, plus (tight end) Ben Mason were the offensive players of the game," Harbaugh said. "Perimeter blocking was huge in this game.” 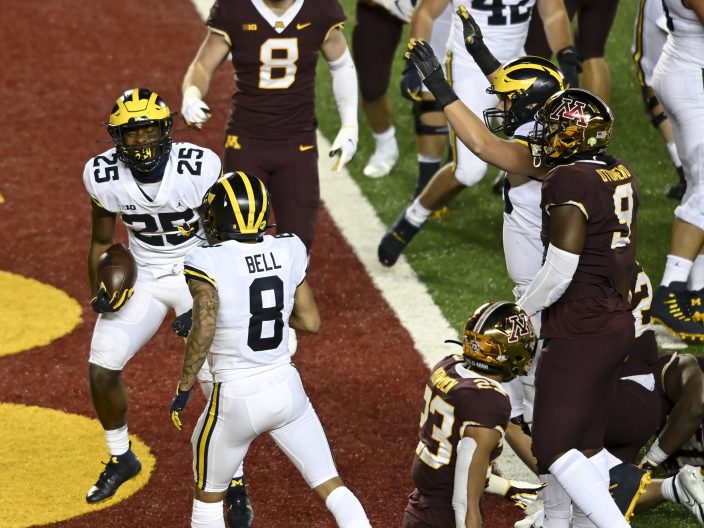 Michigan running back Hassan Haskins (25) celebrates a touchdown in the first half of an NCAA college football game Saturday, Oct. 24, 2020, in Minneapolis, Minn. (Aaron LavinskyStar Tribune via AP)

Michigan's receiving corps took a hit when Nico Collins left the program to prepare for the 2021 NFL draft, Donovan Peoples-Jones skipped his senior season to go pro and Tarik Black transferred to Texas. But Milton went 15 of 22 for 225 yards and a touchdown, completing passes to nine different players.

“We have a tremendous group of receivers,” Harbaugh said. “There's a lot of different directions we can go there, with the talent and speed that we have.”

The confidence Michigan played with extended to both sides of the ball. The Wolverines actually got off to a terrible start. They had a punt blocked, and Minnesota was up 7-0 after just 2:16.

“No one was stressing, there was no one getting worried," defensive lineman Aidan Hutchinson said. "You can see it, and you can feel it, that we knew we were just fine, we knew it was the first quarter. There was so much time left.”

The Wolverines answered immediately with a 70-yard touchdown run by Zach Charbonnet, and they didn't trail again.

Next up for Michigan is a home game against rival Michigan State. The Spartans are off to a distressing start after losing at home to Rutgers last weekend.

Michigan State is adjusting to a new coach. Michigan, on the other hand, may finally be enjoying the benefits of some continuity in its offensive approach.

Masks off the minute you step insi ...