The rapid improvement of the Arizona Cardinals has been on full display during two prime-time wins in just six days.

Now it's time to rest and regroup for a team that's physically banged up.

Arizona's thrilling 37-34 overtime win over the Seahawks on Sunday night was a hard-hitting marathon with both teams running more than 80 plays. The team was already playing on short rest after beating the Cowboys 38-10 in a dominant performance on “Monday Night Football.” 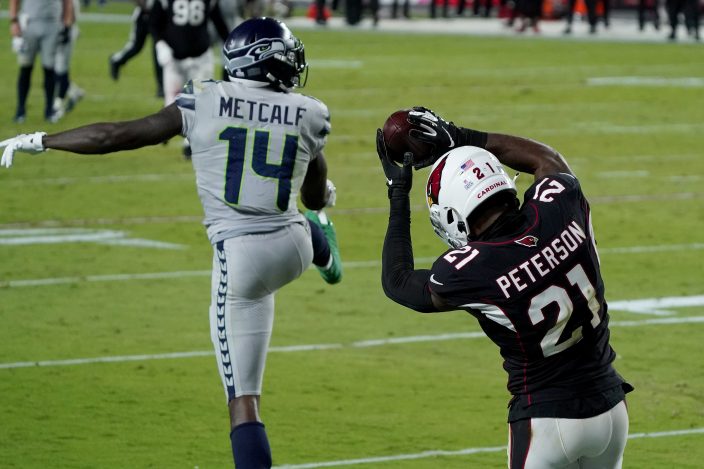 Now the Cardinals have long list of injuries heading into their bye week. Their next game is at home on Nov. 8 against the Miami Dolphins.

“The bye is coming at a good time, that's for sure,” Arizona coach Kliff Kingsbury said.

Several key players left the Seahawks game with injuries, including running back Kenyan Drake, linebackers Jordan Hicks and Isaiah Irving (neck) and defensive linemen Jordan Phillips (hamstring) and Zach Allen (foot). Drake appeared to be in a lot of pain after a 2-yard run in the fourth quarter but Kingsbury — who is usually tight-lipped about injuries — didn't offer many details and said the team was waiting for an MRI.

There's also plenty of good news for the Cardinals: They've won three straight games and now have a 5-2 record, which puts them squarely in the mix in a powerhouse NFC West that includes the Seahawks (5-1), Los Angeles Rams (4-2) and San Francisco 49ers (4-3).

Second-year quarterback Kyler Murray continues to grow into one of the league's most exciting players. He threw for 360 yards and three touchdowns and ran for another 67 yards and a score against the Seahawks. It was another stellar performance that's quickly becoming a common occurrence for the 2019 No. 1 overall draft pick.

Murray's current pace has him throwing for 4,222 yards and running for 999 yards this season. No quarterback in NFL history has topped 4,000 yards passing and 1,000 yards rushing in a single season.

While his teammates might be resting, Murray isn't ready for a break.

“For me there is no bye week,” Murray said. "Last year we kind of treated it like there was a bye week, this year the head stays down. There is no bye week for me, so I’m going to keep at it and be ready to come back and lead these guys.”

Cornerback Patrick Peterson was with the Arizona franchise from 2013-15 during a period when winning big games was the norm. He's happy to see that a new generation of Cardinals — including Murray, Kingsbury, receiver Christian Kirk and safety Budda Baker — is learning what it takes to make that happen.

“It's great for the young guys on this football team to know what it takes to continue to dig down deep while you're in games," Peterson said. “You're never out of it and today gave us that confidence and willpower that we can do anything possible if we put our mind into it.”

The Cardinals are fighting hard but the defense is getting thin. On top of the injuries from the Seahawks game, Arizona's already playing without All-Pro linebacker Chandler Jones, who is out for the year with a biceps injury.

The sliver lining is that the fill-ins have performed well. Little-known players such as safety Chris Banjo, linebackers Dennis Gardeck and Haason Reddick, and rookie defensive lineman Leki Fotu have had big moments. The performance against Seattle was far from perfect, but the defense did hold the Seahawks to just seven points after halftime.

LB Isaiah Simmons. The rookie has been nearly non-existent this season as he's worked to adjust to an NFL defense, but he came up with the biggest play of his young career on Sunday. The No. 8 overall pick from Clemson picked off Russell Wilson late in overtime, which gave the Cardinals time to get downfield and kick the game-winning field goal.

LB Devon Kennard. He hasn't been quite as productive over the past few weeks since returning from a calf injury. He had two sacks in the first three weeks of the season and the Cardinals need his disruptive presence, especially since Jones is out for the year.

It's a long list right now for the Cardinals. The biggest name is probably Drake, who has been part of a productive running game that also includes Murray and Chase Edmonds. Drake is on pace for a 1,000-yard season and at 211 pounds, he's the usual choice to get the hard yards between the tackles.

A few days of R&R comes at a good time. After that, it'll be time to assess how bad the injuries are on defense and what Arizona needs to do to fill the holes.

Cardinals humbled but not hopeless after 2 straight losses