Matthew Stafford had the ball and Matt Prater knew it was time to start kicking.

Atlanta Falcons running back Todd Gurley gave one of the NFL's best comeback quarterbacks a shot to lead the Detroit Lions to victory, and Stafford took advantage. 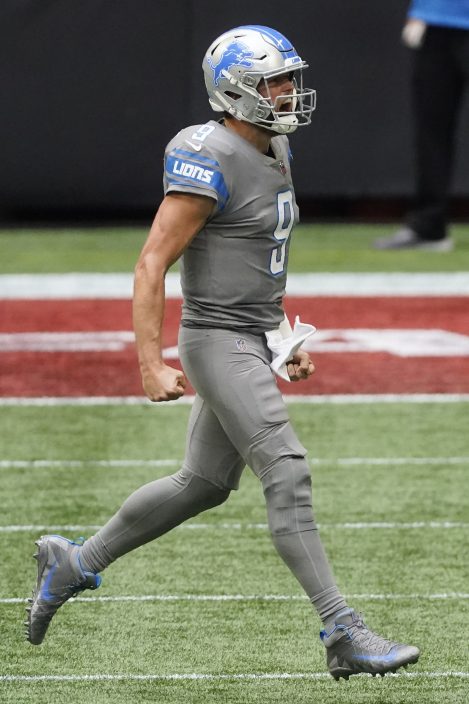 Stafford stepped up in a collapsing pocket and connected with T.J. Hockenson for an 11-yard touchdown pass as time expired and Prater made a 48-yard extra point after a penalty, lifting the Lions to a 23-22 win at Atlanta on Sunday.

Gurley scored by mistake with 1:04 left, getting into the end zone instead of coming up short to set up a short, go-ahead field goal with little time left on the clock.

The gaffe set up Stafford to lead the 36th game-winning drive of his career. Since he was selected No. 1 overall in 2009, Stafford leads the league with 30 fourth-quarter comebacks. 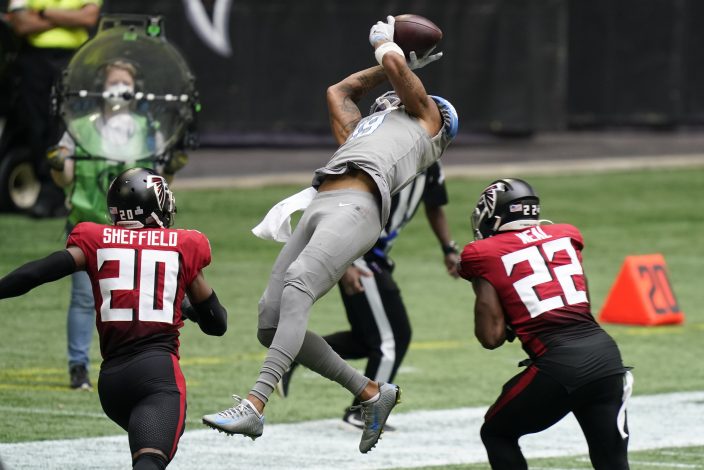 “No official wager was made," Stafford said. “But I mean, I’ll bring it up.” 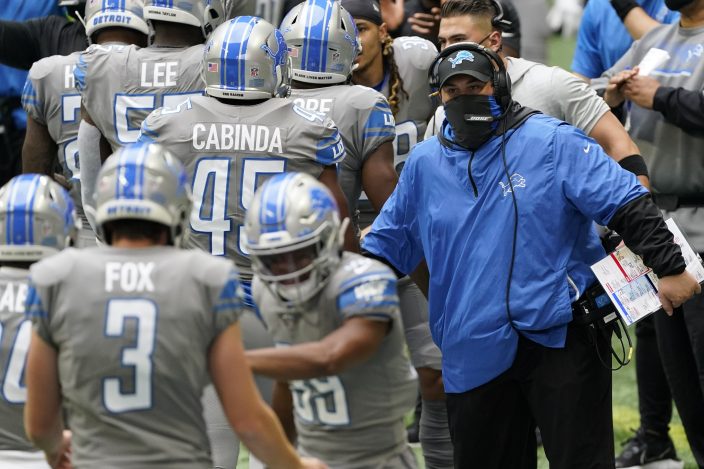 Detroit Lions head coach Matt Patricia greets players after a touchdown against the Atlanta Falcons during the first half of an NFL football game, Sunday, Oct. 25, 2020, in Atlanta. (AP PhotoJohn Bazemore)

Stafford became the second quarterback in the Super Bowl era to throw two game-winning passes with no time remaining in a career, pulling off the feat for the first time since his rookie year.

“As soon as we got the ball, I was just getting ready because I expected to kick," Prater recalled. “It’s always fun to watch Matthew in those moments."

The Lions have allowed a total of 110 yards rushing in their past two games after ranking last in the league against the run, allowing 170-plus yards on the ground through four games.

“Those guys have done a really good job inside anchoring that middle," Patricia said.

Ford Field has not been friendly for the home team. The Lions are 0-2 this season in the Motor City after winning just five of 16 games at home in Patricia's first two seasons.

Kenny Golladay is increasing his leverage in contract talks every time he plays. The wide receiver, who is in the last year of his deal, had 100-plus yards receiving in a second straight game after scoring in each of his first two games.

“He makes unbelievable catches every single week," Patricia said. “I love Kenny, everything he brings to the table for us and his way that he competes every single day."

Detroit declined a fifth-year option to have linebacker Jarrad Davis under contract next season and he hasn't done anything to make the franchise regret the decision. The 2017 first-round pick had one tackle as a reserve linebacker and he has played sparingly since starting the first two games of the season.

Veteran cornerback Desmond Trufant has a nagging hamstring injury that has kept him out of the lineup for almost a month and has limited him to just two games.

3 — Patricia has a chance to lead the Lions to a third straight win for the first time in his three seasons.

Detroit (3-3) hosts the Indianapolis Colts (4-2) on Sunday, hoping to have a winning record in November or later for the first time under Patricia.

The Lions have won consecutive games for the first time in more than a year, but now it isn't time to celebrate.

“It’s critically important for us to just get through the (Atlanta) game, get the corrections and then move on," Patricia said.

“Certainly it was a great game, and I’m proud of the team for the way they handled (Sunday), but that really won’t help us next week. The Colts are going to be ready to go. They’re coming off a bye week. They’re going to be rested."