There were so many flaws that became exposed in the first five games that it was inconceivable the Seattle Seahawks' unbeaten run to start the season would continue indefinitely.

Yet the overwhelming disappointment that came from Seattle’s 37-34 overtime loss to the Arizona Cardinals was even more evidence the Seahawks believed that no matter their issues, they could find a way to overcome them.

Covering up those problems — mostly on defense — through their 5-0 start took the Seahawks getting near-perfect performances from Russell Wilson and a few key defensive plays in scattered moments for Seattle to remain perfect. 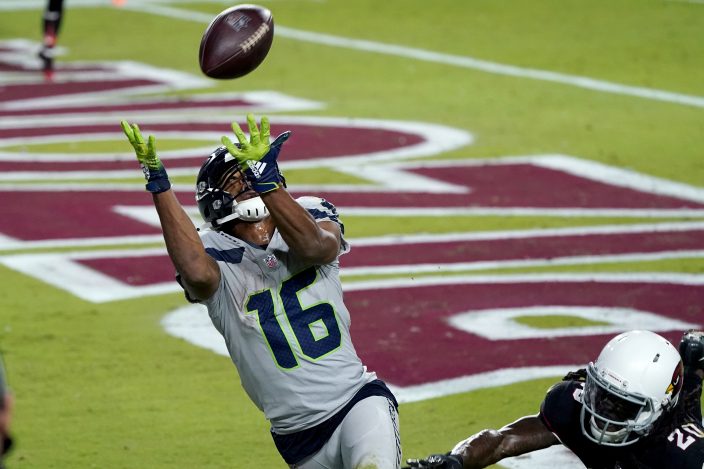 But what came out of the loss to the Cardinals is when Wilson isn't nearly perfect, the Seahawks are going to have trouble.

“We’re no less disappointed in what happened in that game after looking at the film and getting back in getting after it,” Seattle coach Pete Carroll said Monday. “There was so many opportunities to win the football game. We’ve been in the situation where we count on things to happen in the right place, happen in the right situations and the right complementary play occurs, and we just missed it.”

Wilson was good against Arizona, throwing for 388 yards and three touchdowns. But he also threw three interceptions, two near or in the end zone and the final one setting up Arizona’s game-winning points in the closing moments of overtime. 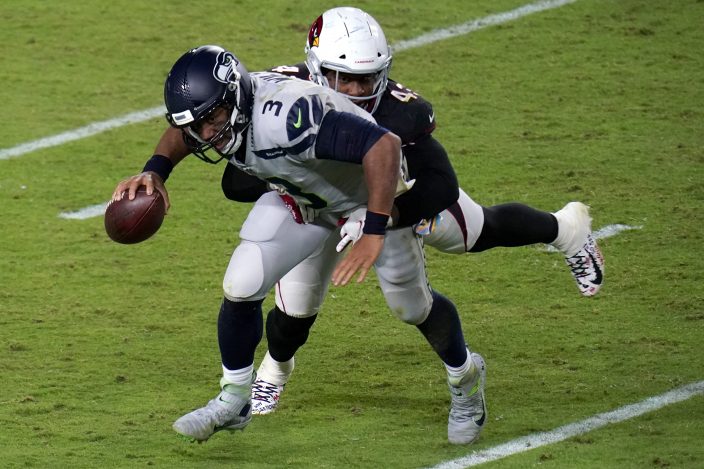 Wilson shouldn’t always have to be near perfect. But the loss to the Cardinals was a reminder of how thin the margins are for a team struggling badly on defense.

The connection between Wilson and Tyler Lockett re-engaged in a big way. Lockett tied the franchise record with 15 receptions and had 200 yards receiving with three TDs in the loss. Lockett is the third player in league history to have those numbers in one game, joining Jimmy Smith and Hall of Famer Steve Largent.

Lockett had been quiet in the weeks before the bye with just six catches in the previous two games combined.

Bobby Wagner sounded fed up. No team in league history has allowed more yards (2,875) through the first six games of a season. No team has allowed that many yards through the air (2,212). Early on, Seattle could justify those huge yardage allowances as the Seahawks having big leads and teams trying to come from behind. But that justification seems to have run its course.

“We have the ability to improve, we just have to make our minds up. That’s it. No more talking. No more saying we’re going to do it. We have to go show it,” Wagner said.

DK Metcalf had a season low with just two catches against the Cardinals, but was still the buzz of social media for one play. His hustle and effort in running down Arizona’s Budda Baker on an interception return in the second quarter was stunning. Baker had a head start of several yards, and yet Metcalf was able chase him down from behind and tackle him short of the end zone.

“It’s one of the most remarkable plays I’ve ever seen,” Wilson said.

Seattle’s pass rush might as well have been non-existent against Arizona. The Seahawks avoided heavy blitz packages for fear of Kyler Murray beating them with his feet, but the base four-man rush was woefully ineffective. Seattle recorded zero QB hits against Murray in 52 passing snaps. Coupled with that lack of pass-rush success was defensive end Benson Mayowa’s critical personal foul on a field goal late in the fourth quarter. Arizona took the field goal off the board, accepted the penalty and scored a touchdown to pull within 34-31.

Depth at running back is suddenly a major concern. Starter Chris Carson (foot sprain) and backup Travis Homer (bruised knee) both suffered injuries in Sunday’s loss that have their availability for this week in question. Backup Carlos Hyde, who rushed for 68 yards and a TD filling in for Carson, also came out of the game with a tight hamstring and will need to be monitored this week, Carroll added. The only fully healthy running back appears to be rookie Deejay Dallas.

Seattle is also unsure if starting cornerback Shaquill Griffin will be available because of both a concussion and a hamstring injury.

Lastly, the Seahawks still don’t know the status of safety Jamal Adams who has missed the past three games with a groin injury.

“I think this will carry late into the week and we’ll see how it works out,” Carroll said of Adams.

59-1 — Seattle had been 59-0 when leading by four or more points at halftime since the start of the 2012 season when Wilson arrived as the starting quarterback. Seattle led Arizona 27-17 at halftime.

The most challenging stretch of the schedule continues with a visit from division foe San Francisco on Sunday. The 49ers won 26-21 last year in Week 17 in Seattle in a game that decided the NFC West title.