When the San Francisco 49ers lost back-to-back home games to Philadelphia and Miami it appeared as if the season could be spiraling out of control for the defending NFC champions.

Coach Kyle Shanahan saw enough glimmers of hope in those two losses to believe a turnaround was possible and the team has done just that with convincing wins the past two weeks over the Rams and New England.

“I understood why we didn’t win those games, but it wasn’t anything to panic about,” Shanahan said Monday a day after San Francisco beat the Patriots 33-6. 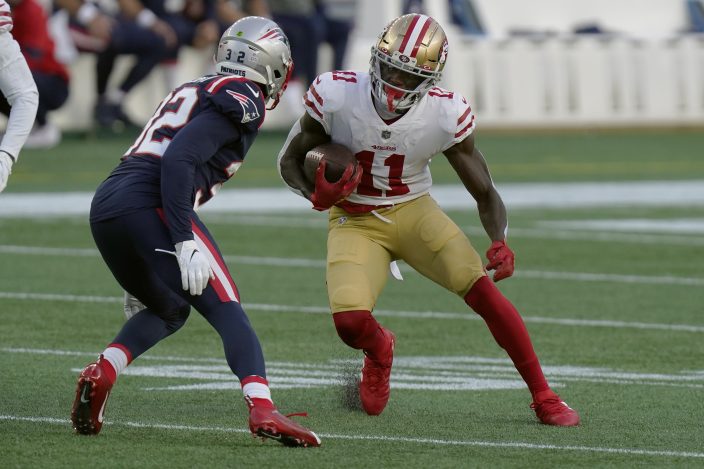 “It was just frustrating. We let a game get away from us I thought we should have won. Then the Miami game, obviously, we shouldn’t have won that game. We got blown out. It was a very embarrassing loss. But when you watch that tape and I wasn’t trying to BS the players, there was a lot of things to be encouraged about.”

Those things have been very apparent the past two weeks as the Niners (4-3) have used an overpowering running game and a stingy defense to get back into contention in the ultra-tough NFC West.

The task doesn’t get any easier with a game coming up Sunday at Seattle against the first-place Seahawks. But the 49ers believe the way they responded from the 43-17 loss to Miami two weeks ago bodes well for the future. 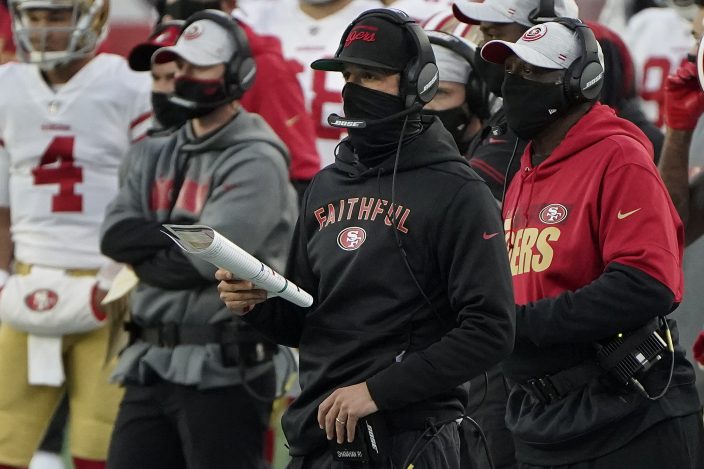 “I think that’s just what we needed, that wake-up call to really spark a fire underneath us and get that sense of urgency back because we know what we’re capable of,” linebacker Fred Warner said. “That wasn’t who we were that week and obviously we’ve been able to put back-to-back performances on where we played dominant defense so we’ve just got to keep it going, stay humble and put our nose to the grindstone once again.”

Running game. The Niners relied heavily on the run for a second straight week with 37 carries in back-to-back games. They were quite productive with 197 yards and four TDs on the ground. That was the second-most TD runs and fourth-most yards rushing in Shanahan’s four seasons in San Francisco.

When a team scores on six of its first eight possessions, doesn’t punt until going up 27 points late in the fourth quarter and doesn’t allow a touchdown all game, there isn’t much that needs help. Rookie Javon Kinlaw did allow pressure that led to a blocked extra point.

Brandon Aiyuk. The rookie receiver had six catches for 115 yards in his most productive game yet. That was the fourth-most yards receiving for a 49ers rookie in a game since the 1970 merger.

Jerick McKinnon. After playing a big role early in the season in place of Raheem Mostert, McKinnon has struggled to get going the past few weeks. He played 66 snaps in Week 4 against Philadelphia, the most for a 49ers halfback since Frank Gore had 66 in the 2013 opener. Since then, McKinnon has 10 carries for 17 yards in three games.

RB Jeff Wilson Jr. left the game with a high ankle sprain and is headed to injured reserve. ... WR Deebo Samuel will likely miss the next two games after straining his hamstring. ... WR Richie James Jr. (ankle) also left the game but could be back this week. ... Shanahan is hoping to get RB Tevin Coleman back from a knee injury that sidelined him in Week 2.

27. The 27-point margin of victory was the biggest ever against a Bill Belichick-coached Patriots team in Foxborough. The previous time New England lost by more at home came in a 41-10 loss to Atlanta in 1998.

Losses mount for 49ers on field and with injuries

49ers use early season formula on playoff win vs. Vikings

49ers can clinch top seed in NFC with win at Seattle