Saints defensive tackle Sheldon Rankins is seeing a pattern — and an encouraging one at that.

In each of the previous three seasons, the Saints overcame some early season adversity and swept all of their October games en route to an NFC South crown.

For a fourth straight season, the Saints have won all of their October games again — three this year because their bye fell in Week 6. 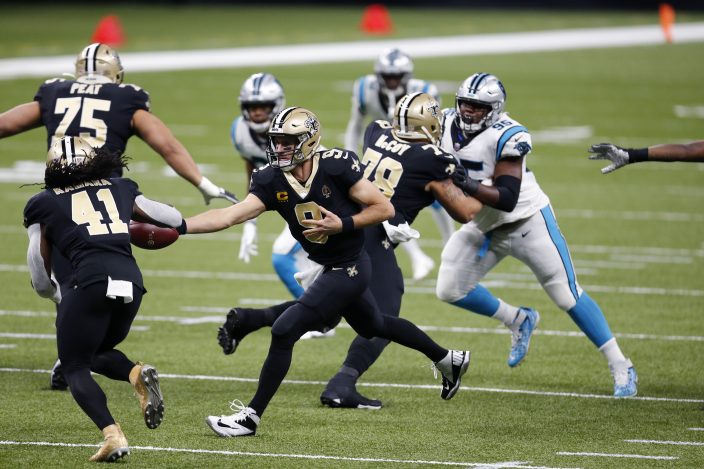 New Orleans Saints quarterback Drew Brees (9) hands off to running back Alvin Kamara (41) in the first half of an NFL football game against the Carolina Panthers in New Orleans, Sunday, Oct. 25, 2020. (AP PhotoBrett Duke)

The winning streak has New Orleans (4-2), which stumbled to a 1-2 start, just a half-game back of Tampa Bay for the top spot in the division with 10 games to go.

“We don’t ever plan for early season stumbles or anything like that, but ... adversity to start a season is nothing new to us. We’ve faced it before. We know what it takes to get on a roll and start winning some games,” Rankins said. "We’ve always found a way to weather the storm. And we’ll continue to get better and continue to fix the things that need to be fixed. And we’ll get on a roll here.”

His reasons for optimism start with his own health, which has steadily improved, along with his effectiveness, as he's come back from surgery aimed at shoring up his Achilles tendon. Then there's the health of the defensive front as a whole, which two games ago got 2018 first-round draft choice Marcus Davenport back at defensive end. 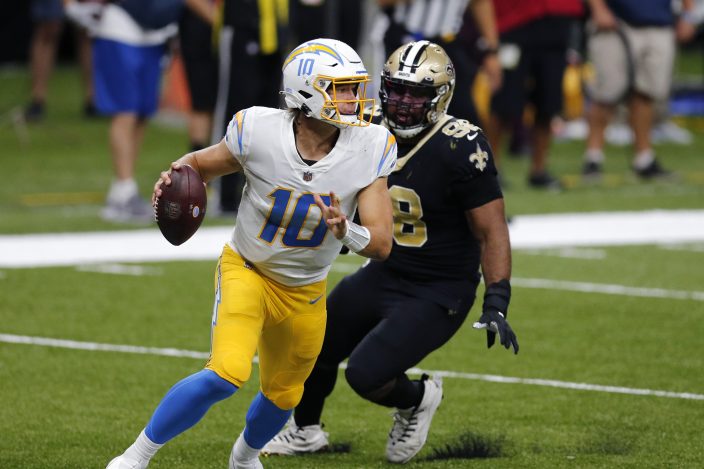 Then there's the offense, which, despite getting less healthy at receiver — Michael Thomas (hamstring) and Emmanuel Sanders (COVID-19) were both out last weekend — still was so methodically dominant that the Saints possessed the ball nearly 35 minutes and did not punt in a 27-24 triumph over Carolina on Sunday.

Quarterback Drew Brees, now 41 and in his 20th season, has looked younger as the season has gone on. He completed 80.6 percent of his passes against the Panthers for 287 yards and two TDs. He also dove over a pile of linemen on the goal line for another 1-yard score.

And the running game has been flourishing, led by the tandem of the dynamic Alvin Kamara and bruising Latavius Murray. 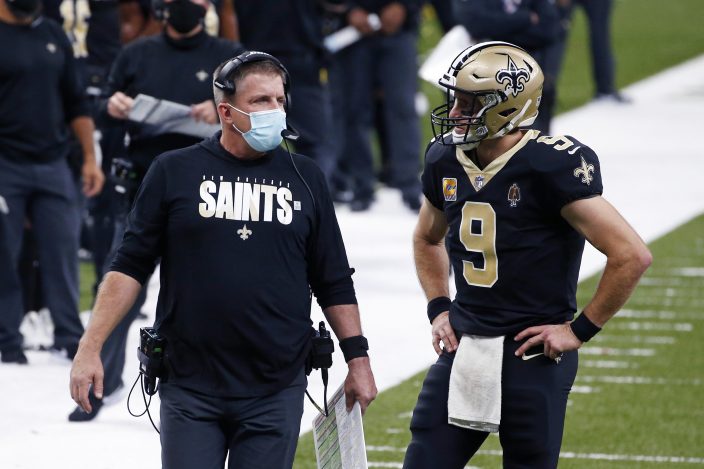 The Saints' run defense. After allowing just 37 yards rushing against Carolina, the Saints entered Monday ranked fourth in the NFL against the run, allowing 89.7 yards per game.

The Saints' red zone defense continues to be a sore spot. New Orleans has allowed touchdowns on 86.4 percent of opponents' possessions inside the 20, which ranks last in the league.

Coach Sean Payton also is concerned about the secondary's propensity for coverage busts. The Saints have allowed receptions longer than 30 yards in every game, including more than a handful in the range of 49 to 74 yards.

“We have to eliminate the explosives,” Payton said. “We have to get it figured out. ... Coming off of training camp, I wouldn’t have thought that would be such an issue, but it is right now and we’re addressing it.”

— Davenport had an injury-plagued start to the season before finally seeing action in Week 5. He came through with what was a key sack on Carolina's final possession, prompting the Panthers to attempt a 65-yard field goal that fell just short.

— Undrafted rookie receiver Marquez Callaway, who was inactive for New Orleans' first three games, apparently has gained the trust of Brees, who threw to him a team-high 10 times against Carolina. Callaway caught eight of those passes for 75 yards. He saw his first consistent action one game earlier and made four catches for 34 yards.

“He opened eyes,” Payton said of Callaway. "We received a chance to see him explosively on some plays and it’s great to see someone’s progress, especially a first-year player in this season. It’s encouraging and we’ll continue to build on that.”

Safety Marcus Williams appeared to be in the wrong position when Carolina receiver DJ Moore ran free down the middle of the field for a 74-yard touchdown catch. Williams also could not shed a block by running back Mike Davis as he attempted to pursue Moore near the right sideline on another play in which Moore turned the corner for his second touchdown as Davis sent Williams tumbling out of bounds.

Left tackle Terron Armstead left Sunday's game with an arm injury after starting the game with a wrap on his hand. While he did not return to the game, he remained in uniform on the bench and the severity of his injury remains unclear. Callaway limped off the field, favoring his left leg, after making his eighth catch. He said after the game that he was OK, but it remains to be seen how his body responds during recovery this week.

824: Alvin Kamara's yards from scrimmage in just six games, an average of 137.3 yards per game.

The Saints travel to Chicago on Sunday.