The Buffalo Bills snapped a two-game losing streak and opened up a 1 1/2-game lead in the AFC East.

But their 18-10 win over the New York Jets on Sunday did little to mask the deficiencies on offense that have risen in recent weeks.

The Bills (5-2) were able to outlast the winless Jets, but were unable to find the end zone. They won with help from rookie Tyler Bass, who tied a franchise record with six field goals. 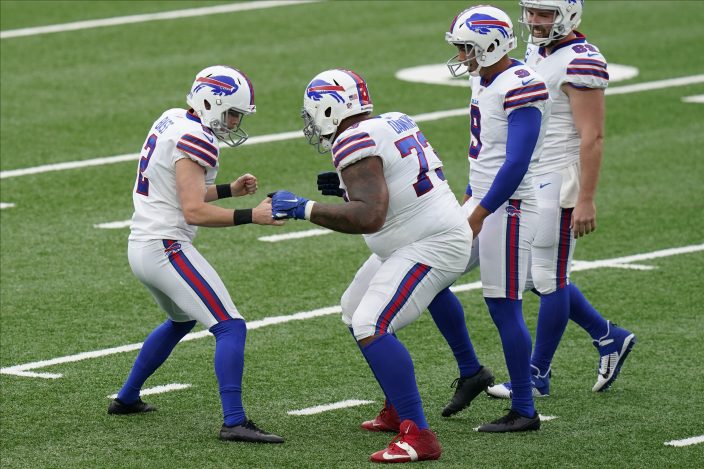 The Bills had all 10 of their drives finish in Jets territory, yet they came away with only field goals. In comparison, nine of Buffalo’s 10 drives in Week 1 against the Jets ended in opposing territory and the Bills scored three touchdowns and two field goals in a 27-17 win.

“We did a good job of moving the ball,” Allen said. “The stats speak for itself. We have to find ways to finish in the end zone. It has to be better on my part.” 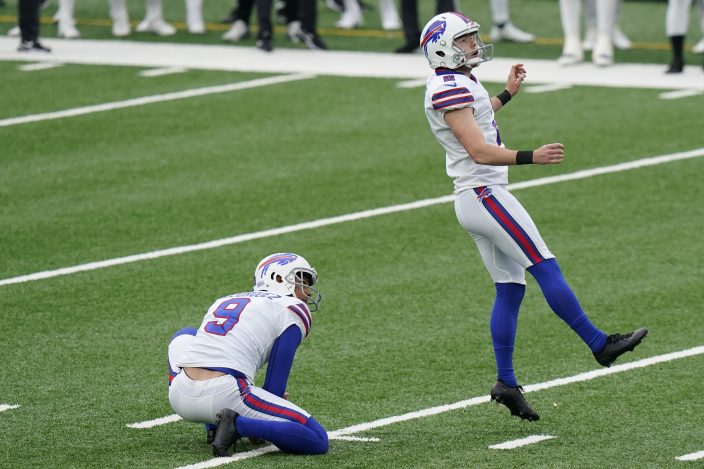 Buffalo Bills kicker Tyler Bass, right, looks after his eighth field goal-attempt of the day during the second half of an NFL football game against the New York Jets, Sunday, Oct. 25, 2020, in East Rutherford, N.J. (AP PhotoFrank Franklin II)

The previous time the Bills won without scoring a touchdown was a 17-16 win at Washington on Dec. 2, 2007, when Buffalo had five field goals and a safety.

The Bills have clearly missed wide receiver John Brown, who has missed time in recent weeks with calf and knee injuries. In Brown’s absence, however, veteran Cole Beasley rose to the occasion and had his best game of the season. Beasley was dynamite in the slot and finished with a season-high 11 receptions for 112 yards, as Buffalo was forced to convert throws over the middle instead of attacking the Jets with the deep ball.

“We worked him there for the better part of the game, so he stepped up for us,” Allen said. “When teams want to drop back and put seven or eight in coverage we’ve got to find ways to continue to move the ball. He’s been awesome for us. We have to keep plugging away, and obviously we want to score more touchdowns and more points there. It is what it is. It’s a division win. These aren’t always going to be the prettiest of wins, and we understand that.” 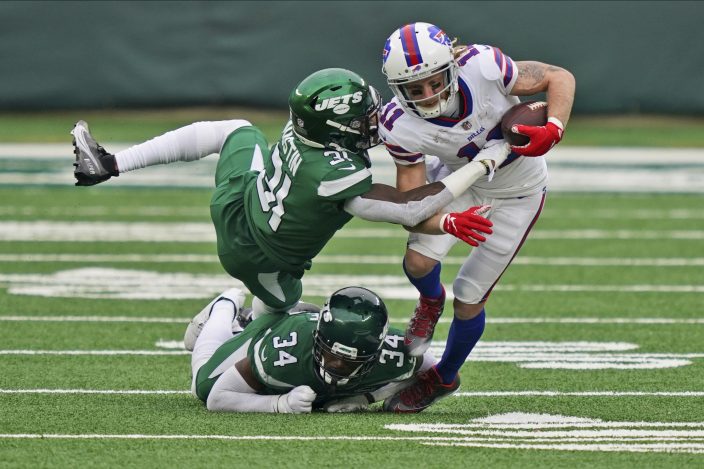 Allen’s production. For all of Buffalo’s inconsistencies on offense, the young quarterback remains a solid and improving presence in the pocket. Allen is the third quarterback in NFL history with 2,000 or more passing yards, 16 or more touchdowns and three or more rushing touchdowns in a season’s first seven games, joining only Steve Young in 1998 and Donovan McNabb in 2006.

The Bills have been saddled with injuries in recent weeks on both sides of the ball. Brown has been a key injury on offense, while linebackers Matt Milano and Tremaine Edmunds are playing at less than 100 percent; Milano returned under a limited snap count on Sunday (19 snaps, or 33 percent of Buffalo’s defensive snaps) after missing two weeks. Cornerbacks Josh Norman (hamstring) and Levi Wallace (ankle) have yet to return, while Tre’Davious White (back) and Cam Lewis (wrist) are playing through injuries. The Bills have until Wednesday to decide whether to activate starting guard Jon Feliciano, who’s been out with a pectoral injury.

Buffalo’s defense has struggled to regain its previous form all season long, but it may have turned a corner in the second half against the Jets. After falling behind 10-0 in the first half, the Bills held the Jets to just 4 yards in the second half.

6 — Kicker Tyler Bass tied a franchise record by making six field goals against the Jets. The previous Bills kicker to accomplish that feat, Steve Christie, also did so on the road against the Jets (on Oct. 20, 1996).

The Bills can increase their hold on the AFC East against the New England Patriots on Sunday. The Patriots have dominated Buffalo for the past two decades, but are struggling and coming off a 33-6 loss to San Francisco.

The prime ministers of Poland and ...

Despite loss, Bills in good shape going into playoffs