The Latest on the confirmation of Amy Coney Barrett to the Supreme Court (all times local):

The scene at an outdoor White House ceremony for Amy Coney Barrett looked very different from the previous White House event where President Donald Trump introduced her as his nominee. 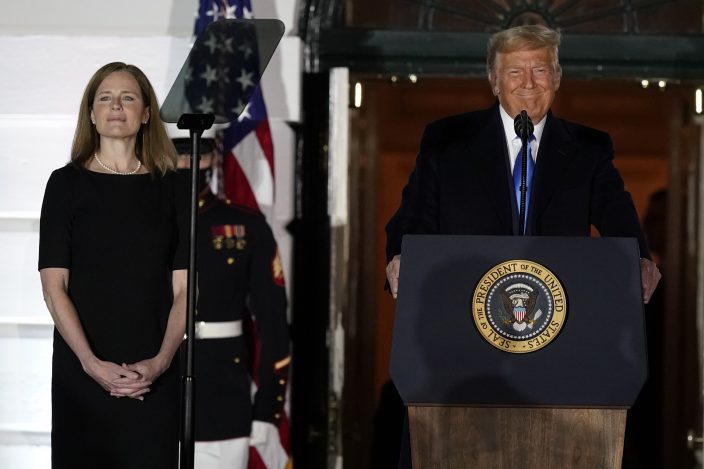 Monday’s event was held on the South Lawn instead of the smaller Rose Garden.

Scores of guests were spaced out as opposed to being seated close together, as they were in the garden at the event on Sept. 26.

Most guests wore masks on Monday as opposed to the September event, where few people wore face coverings to protect themselves from the coronavirus.

Amy Coney Barrett has taken the first of two oaths she needs to officially join the Supreme Court.

Barrett is the first Supreme Court justice to be confirmed so close to a presidential election.

A conservative, Barrett fills the vacancy created by the September death of Justice Ruth Bader Ginsberg, who led the court’s liberal voting bloc.

Chief Justice John Roberts is set to administer a second oath -- known as the judicial oath -- to the former federal appeals court judge at a private ceremony at the court on Tuesday.

The 48-year-old Louisiana native will then be able to take part in the high court’s work. Her addition likely will solidify a 6-3 conservative shift on the nation’s highest court.

Conor McGregor has been sued in Ir ...