This time they mostly wore masks.

It's been only a month since President Donald Trump's Rose Garden event to announce he was nominating Amy Coney Barrett to serve on the Supreme Court. That packed celebration for friends and allies of the president and his high court nominee turned into a coronavirus superspreader event.

When the just-confirmed Barrett returned to the White House on Monday to take her constitutional oath, the celebration was moved to the broader South Lawn, chairs for more than 200 guests were spread about 6 feet apart, and the mask-wearers greatly outnumbered those who declined to cover their faces. 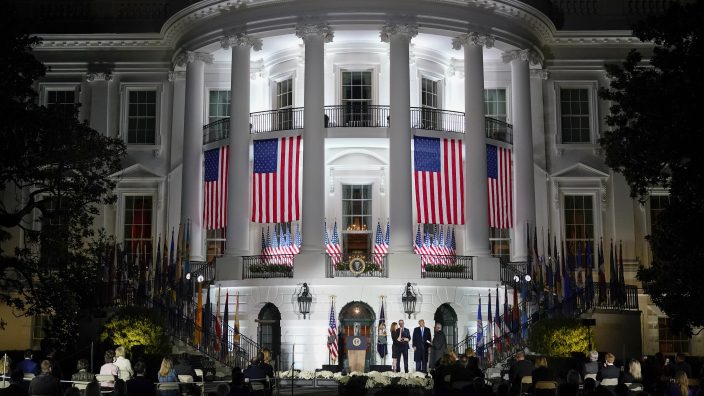 President Donald Trump watches as Supreme Court Justice Clarence Thomas administers the Constitutional Oath to Amy Coney Barrett on the South Lawn of the White House White House in Washington, Monday, Oct. 26, 2020, after Barrett was confirmed to be a Supreme Court justice by the Senate earlier in the evening. Holding the Bible is Barrett's husband, Jesse Barrett. (AP PhotoAlex Brandon)

Some participants — including Trump and Barrett — were unmasked.

Back then, the attendees showed a measure of ease — exchanging handshakes and hugs and standing close together as they conversed — that belied the reality that the nation was in the midst of a pandemic. The crowd was then ushered indoors for a reception. 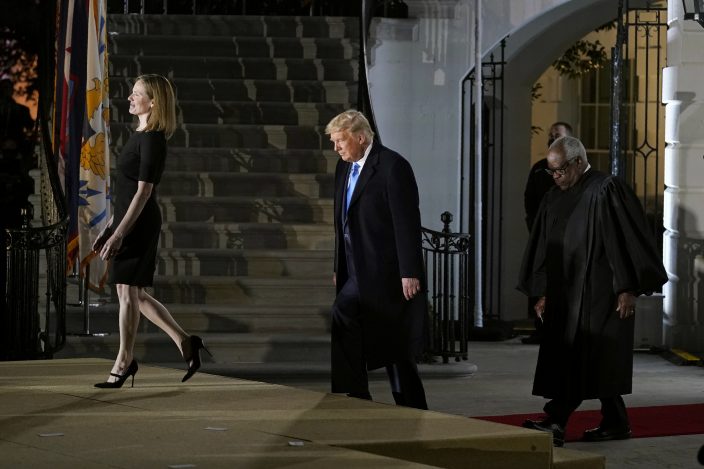 Amy Coney Barrett, from left, President Donald Trump and Supreme Court Justice Clarence Thomas walk onstage for a ceremony on the South Lawn of the White House in Washington, Monday, Oct. 26, 2020, after Barrett was confirmed by the Senate earlier in the evening. (AP PhotoPatrick Semansky)

Hours before Monday's ceremony, District of Columbia Mayor Muriel Bowser questioned the wisdom of holding another large gathering at a moment when coronavirus cases were spiking in the U.S. She accused the president of flouting “scientific evidence and common sense.”

“I know that there were a number of people who attended that Rose Garden event who became sick, who are quite embarrassed by their participation, who had to go back to their constituencies and communities and explain their behavior,” Bowser said. “And so we don’t want any folks, our residents, certainly from D.C. or in our surrounding region, to be in that situation.”

After Barrett was administered the oath by Justice Clarence Thomas and delivered brief remarks, the assembled crowd stood to cheer and take photos from afar as the new justice posed with Trump, their spouses and Thomas.

Many guests stood for a few minutes in small groups, chatting with their masks secure before heading for the exits minutes after the guest of honor departed.

Some Republican senators invited to attend to the event decided it was better to watch from afar.

Indiana Sen. Todd Young told reporters that he had told the White House he would attend, but was reconsidering. Asked why, he said “no reason” and that it “had to do with a lot of factors.” Sen. Lindsey Graham, the head of the Senate Judiciary Committee, had been expected at the event, but the South Carolina lawmaker — locked in a tough reelection fight — instead made an appearance on Fox News.

Alaska Sen. Lisa Murkowski said she was “staying away” because she was headed to Alaska and cases have been increasing there. She said people need to be careful about gatherings as illnesses have been rising, but stopped short of calling the White House event a mistake.

“It just seems like it’s just been a slow tsunami,” Murkowski said. “And I think that we all need to be very cautious and very careful."