One week until Election Day, Joe Biden is going on offense, heading Tuesday to Georgia — which hasn’t backed a Democrat for president since 1992 — and pushing into other territory where President Donald Trump was once expected to easily repeat his wins from four years ago.

The Democratic presidential nominee planned to travel to Iowa, which Trump took by 10 points in 2016, later in the week. His running mate, California Sen. Kamala Harris, is heading to Arizona and Texas, where Republicans haven’t lost any statewide office since 1994 — the nation’s longest political winning streak.

The aggressive schedule is a sign of confidence by the Biden team, which is trying to stretch the electoral map and open up more paths to 270 electoral college votes. But after Democrats flirted with GOP territory in 2016, only to lose those states as well as their traditional Midwestern strongholds, Biden’s campaign is mindful of overreaching. The former vice president will also visit in the coming days Wisconsin, Michigan, and Florida.

Georgia, where Biden will make two stops on Tuesday, has increasingly become a draw for Democrats in recent years, as turnout increases among Black voters and the Atlanta suburbs tilt away from the GOP.

“If this was the Georgia of 2008, 2012 I think there’s no way we would have seen a Biden come this late,” said Nsé Ufot, chief executive officer of the New Georgia Project, which aims to increase voter registration, especially among young people and minorities. “It’s a loud signal and acknowledgement of Georgia as a battleground state.” 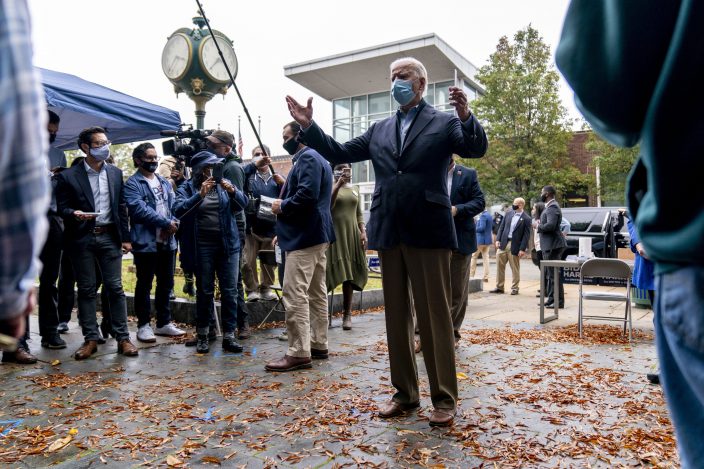 Trump is staying focused on the so-called “blue wall” states that he flipped in 2016: Pennsylvania, Michigan and Wisconsin, where he'll return on Tuesday to hit West Salem just three days after holding a Janesville rally.

While Biden rarely travels to more than one state per day, the president has maintained a whirlwind schedule, crisscrossing the country and making the argument that he built a booming economy before the coronavirus pandemic upended it.

His latest swing could be a victory lap after the Senate on Monday approved the nomination of Amy Coney Barrett and gave conservatives a commanding, 6-3 advantage on the Supreme Court. Trump has sought to use the vacancy created by the death of Justice Ruth Bader Ginsburg last month to animate conservative evangelical and Catholic voters to his candidacy, but the high court fight has been overshadowed by concerns over the coronavirus with cases surging. 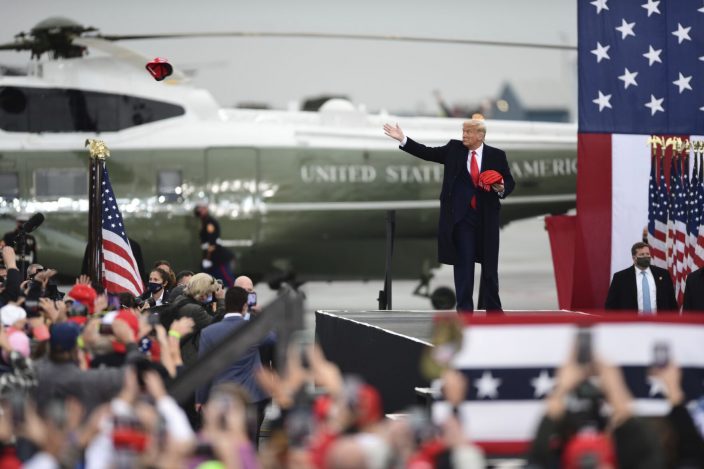 President Donald Trump tosses hats into the crowd as he arrives for a campaign rally at the Altoona-Blair County Airport in Martinsburg, Pa, Monday, Oct. 26, 2020. (John RucoskyThe Tribune-Democrat via AP)

Biden, meanwhile, is hoping to lift Democrats running for Senate in Georgia and Iowa with this travel plans. He planned to unveil his closing message during a Tuesday speech in Warm Springs, Georgia, where natural hot springs offered President Franklin Delano Roosevelt comfort as he battled polio and governed a nation weathering the Great Depression and World War II.

The former vice president's campaign says his appearance will bookend his visit earlier this month to Gettysburg, Pennsylvania, when Biden used the site of the bloody Civil War battle to issue a call for bipartisanship and putting country ahead of party. On Tuesday, he will try to evoke Roosevelt's New Deal sensitivities while promising to restore the nation's character.

“This is our opportunity to leave the dark, angry politics of the past four years behind us,” Biden declares in a 60-second closing ad airing on national cable channels and 16 states his campaign considers battlegrounds. 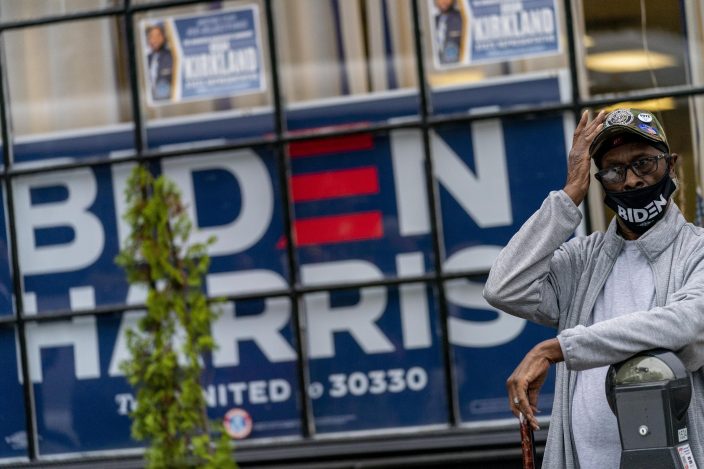 Both campaigns focused Monday on Pennsylvania, with Trump drawing thousands of largely mask-less supporters to rallies while Biden popped just over the border from his home in Delaware to greet a small group of supporters outside a campaign field office in Chester.

Biden declared, “Bottom line is Donald Trump is the worst possible person to lead us through this pandemic.” Trump countered that his Democratic challenger would impose unnecessary shutdowns.

“It’s a choice between a Trump boom or a Biden lockdown,” the president said at a rally in Allentown.

With more than a third of the expected ballots in the election already cast, it could become increasingly challenging for Trump and Biden to reshape the race. Biden is leading in most national polls and has an advantage, though narrower, in many key battlegrounds.

The campaign's final week is colliding with deepening concerns about the COVID crisis. Trump is anxious for voters to focus on other issues such as the economy. Biden, meanwhile, has repeatedly hit Trump on the virus while presenting himself as a safer, more stable alternative.

Several close aides to Vice President Mike Pence tested positive for the virus last weekend, including his chief of staff, Marc Short. Pence, though, has maintained a packed travel schedule. On Tuesday he'll be in South Carolina, a potential boost for Republican Sen. Lindsey Graham, who is in a potentially tight reelection race. 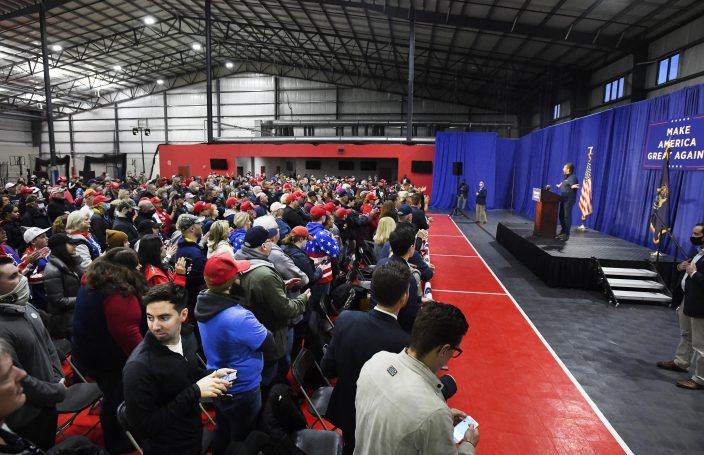 Biden has accused Trump of “waving the white flag” in his response to the virus, while Trump fired back Monday that the former vice president “waved a white flag on life.”

Anticipating a razor-thin Electoral College margin, Trump has an aggressive schedule including a visit to Omaha, Nebraska, on Tuesday after a Sunday visit to Maine, aiming to lock up one electoral vote in each of the states that award them by congressional district. The president is scheduled hold a dizzying 11 rallies in the final 48 hours before polls close.

Democrats have been heartened by their lead in the record numbers of early votes that have been cast across a number of battleground states — though they caution that Republicans are more likely to turn out on Election Day. 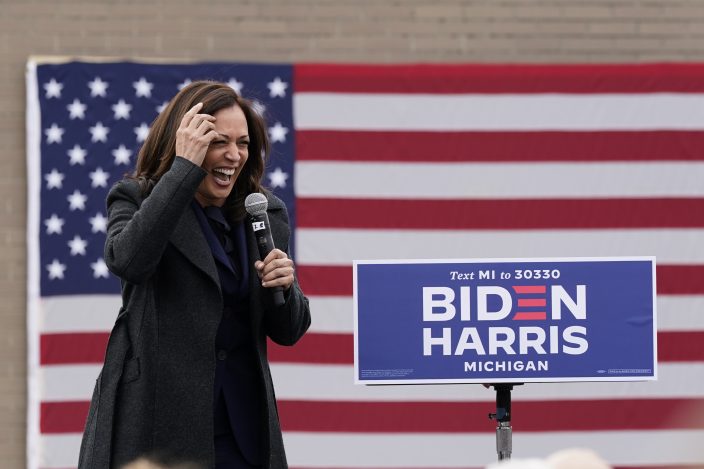 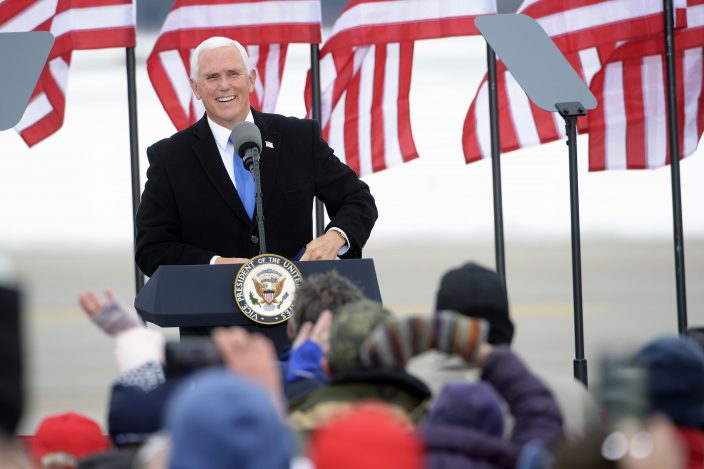 The boss of Australia's largest ai ...

Trump to appeal to Nevada voters from neighboring Arizona