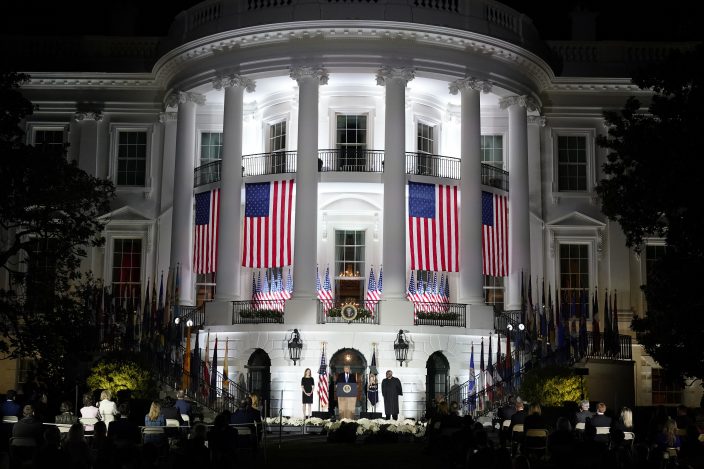 SUPREME COURT-BARRETT — Amy Coney Barrett’s first votes on the Supreme Court could include two big topics affecting the man who appointed her. The court is weighing a plea from President Donald Trump to prevent the Manhattan District Attorney from acquiring his tax returns as well as appeals from Republicans to shorten the deadlines for receiving and counting absentee ballots in the battleground states of North Carolina and Pennsylvania. By Mark Sherman. SENT: 560 words, photos, video. With SUPREME COURT-BARRETT-SPENDING — Barrett ads tied to interest groups funded by unnamed donors; SUPREME-COURT-BARRETT-SCENE — Barrett swearing-in differs markedly from “superspreader."

ELECTION 2020 — Joe Biden plans to use the final week before Election Day to go on offense, heading to Georgia — which hasn’t backed a Democrat for president since 1992 — and planning travel that may put Trump on defense in states he won four years ago. By Will Weissert, Alexandra Jaffe and Kevin Freking. SENT: 860 words, photos, video. 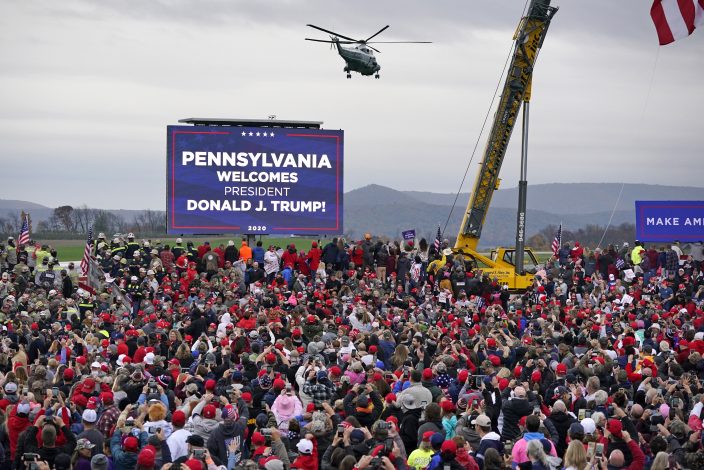 ELECTION 2020-MIDWEST-VIRUS — The coronavirus is getting worse in states that Trump needs the most. That includes Wisconsin, where Trump is fighting to catch Biden in a state Trump narrowly won in 2016, Iowa, where the two are now in a toss-up race. By Thomas Beaumont. SENT: 880 words, photos.

PAKISTAN-SEMINARY-BOMBING — A powerful bomb blast rips through an Islamic seminary on the outskirts of the northwest Pakistani city of Peshawar, killing at least seven students and wounding 112 others, police and a hospital spokesman say. By Riaz Khan. SENT: 590 words, photos. 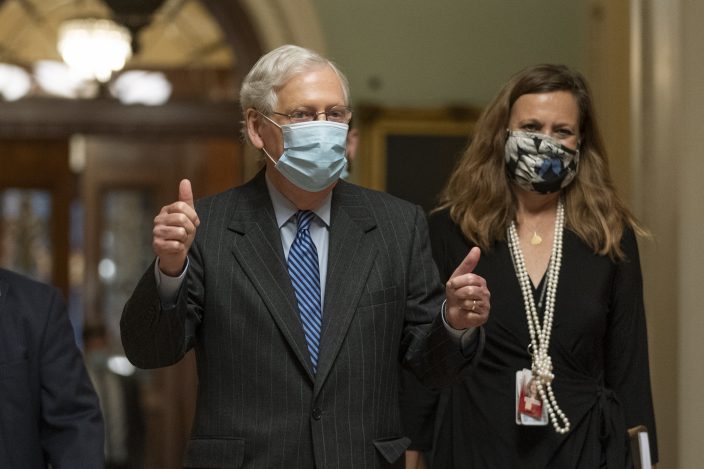 Senate Majority Leader Mitch McConnell of Ky., flashes his thumbs up as he leaves the chamber at the Capitol after a vote confirming Amy Coney Barrett to the Supreme Court, Monday, Oct. 26, 2020, in Washington. (AP PhotoManuel Balce Ceneta)

CALIFORNIA WILDFIRES — California prepares for another round of dangerous fire weather even as crews fight a pair of fast-moving blazes in the south that critically injured two firefighters and left more than 100,000 under evacuation orders. By Christopher Weber and Olga R. Rodriguez. SENT: 750 words, photos.

VIRUS-OUTBREAK-AN-UNUSUAL-HALLOWEEN — For Americans, 2020 was a year when fear and death commandeered front-row seats in life. There is a pandemic, a fundamental reckoning about race and political divisions like perhaps never before. With that as a backdrop, how do we encounter the holiday whose existence hinges on turning fear and death into something fun? By National Writer Ted Anthony. SENT: 1,510 words, photos. An abridged version of 1,000 words is available. 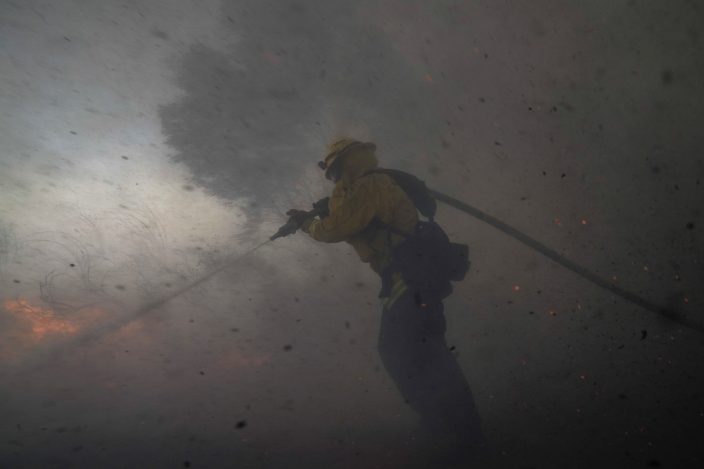 A firefighter battles the Silverado Fire Monday, Oct. 26, 2020, in Irvine, Calif. A fast-moving wildfire forced evacuation orders for 60,000 people in Southern California on Monday as powerful winds across the state prompted power to be cut to hundreds of thousands to prevent utility equipment from sparking new blazes. (AP PhotoJae C. Hong) 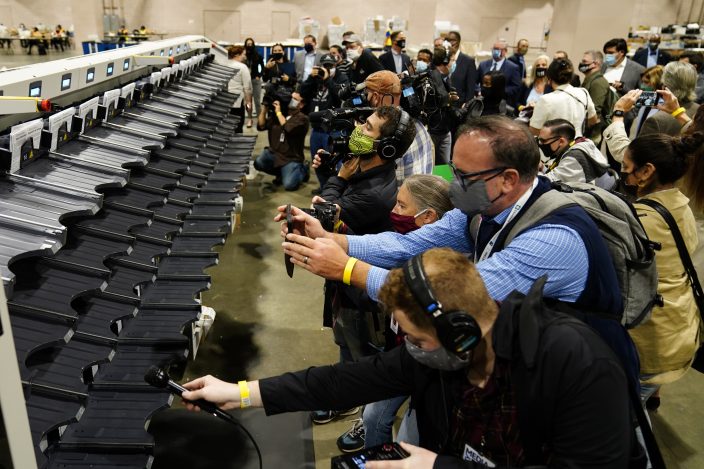 VIRUS-OUTBREAK-DUBAI-AIRPORT — Dubai International Airport, the world’s busiest for international travel, is a long way from what it once was amid the coronavirus pandemic as it prepares for a possible ”extended, slow recovery,” its CEO tells The Associated Press. By Jon Gambrell. SENT: 800 words, photos. With VIRUS-OUTBREAK-THE-LATEST. 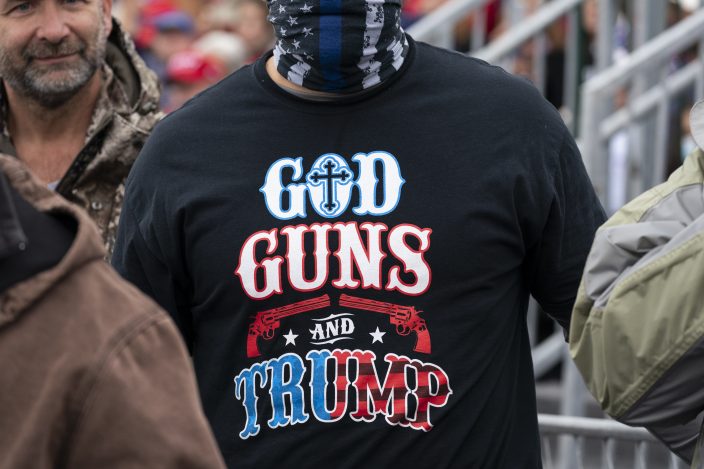 SUPREME COURT-WISCONSIN-ABSENTEE — The Supreme Court is siding with Republicans to prevent Wisconsin from counting mailed ballots that are received after Election Day. SENT: 480 words, photo. 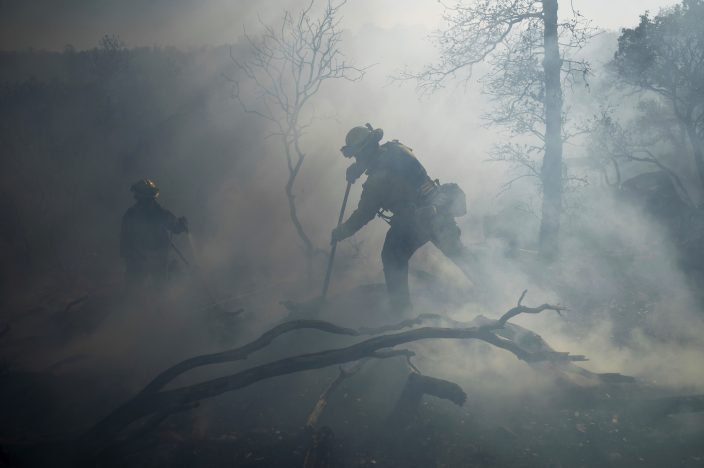 A firefighter extinguishes hotspots while battling the Olinda Fire in Anderson, Calif., Sunday, Oct. 25, 2020. The blaze was one of four fires burning near Redding that firefighters scrambled to stop as high winds buffeted Northern California. (AP PhotoNoah Berger)

ELECTION-2020-SENATE-ALABAMA — Standing by a blue pickup truck at a rally near the birthplace of the late civil rights icon John Lewis, Alabama Sen. Doug Jones urged voters to look at his record from his three years in office and not what he called Republican distortions about him. SENT: 1,020 words, photos.

FILE - In this Oct. 22, 2020, file photo, coronavirus-themed Halloween decorations are displayed on a lawn in Tenafly, N.J. In a year when fear and death have commandeered front-row seats in American life, what does it mean to encounter Halloween, a holiday whose very existence hinges on turning fear and death into entertainment? (AP PhotoSeth Wenig, File)

TROPICAL-WEATHER — Hurricane Zeta, the 27th named storm in a very busy Atlantic season, makes landfall on the Caribbean coast of the eastern Yucatan Peninsula while whipping the resorts around Tulum with rain and wind. SENT: 510 words, photos. 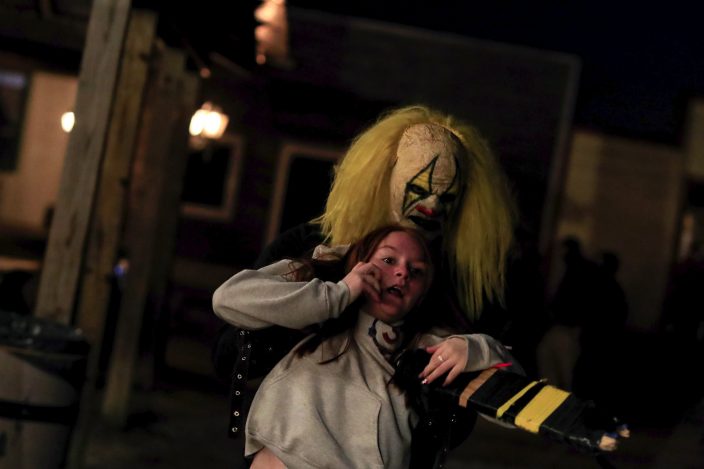 An cast member dressed as a clown grabs and drags away a visitor of Terror Town, Saturday, Oct. 17, 2020, in Williamsburg, Ohio. In a year when fear and death have commandeered front-row seats in American life, what does it mean to encounter Halloween, a holiday whose very existence hinges on turning fear and death into entertainment? (AP PhotoAaron Doster)

ASIA-TYPHOON — Vietnam scrambles to evacuate more than a million people in its central lowlands as a strong typhoon approaches while some regions are still dealing with the aftermath of recent killer floods. SENT: 300 words, photos. 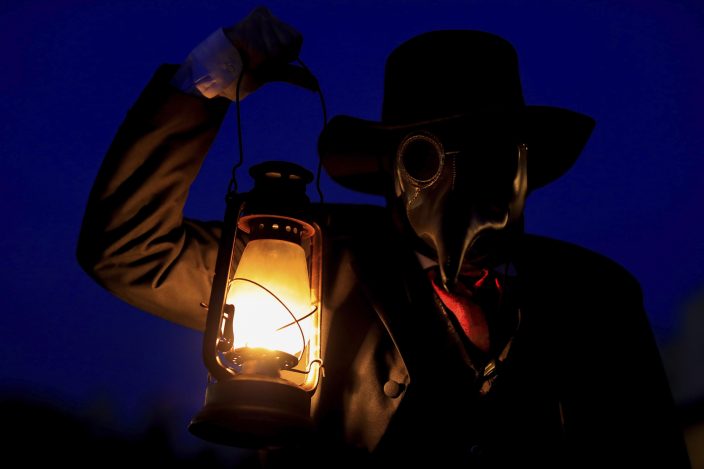 Co-Owner of Terror Town, James Gregory, holds a lantern as he wears a black plague mask while scaring visitors, Saturday, Oct. 17, 2020, in Williamsburg, Ohio. In a year when fear and death have commandeered front-row seats in American life, what does it mean to encounter Halloween, a holiday whose very existence hinges on turning fear and death into entertainment? (AP PhotoAaron Doster)

BRANDED WOMEN — A self-improvement guru whose organization NXIVM attracted millionaires and actresses among its adherents, faces sentencing on convictions that he turned some female followers into sex slaves branded with his initials. SENT: 540 words, photo. 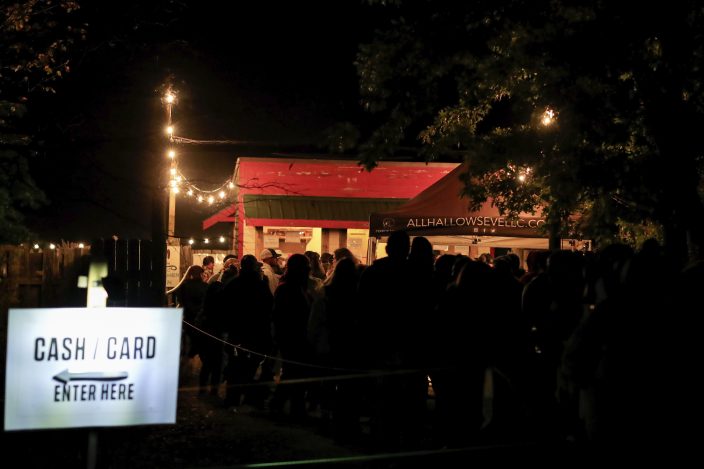 A line of people stand at the ticket area as they wait to enter Terror Town, Saturday, Oct. 17, 2020, in Williamsburg, Ohio. In a year when fear and death have commandeered front-row seats in American life, what does it mean to encounter Halloween, a holiday whose very existence hinges on turning fear and death into entertainment? (AP PhotoAaron Doster)

GIRLS-FOOTBALL-LAWSUIT — A Utah high school student hopes she can give girls a chance to play on female-only high school football teams through a lawsuit. SENT: 700 words, photos.

Cast member Dean Stout, left, puts a Terror Town visitor in a pillory, Saturday, Oct. 17, 2020, in Williamsburg, Ohio. Dean portrays a sheriff of the town protecting from the cult that has moved into the area. In a year when fear and death have commandeered front-row seats in American life, what does it mean to encounter Halloween, a holiday whose very existence hinges on turning fear and death into entertainment? (AP PhotoAaron Doster)

WORLD SERIES-NEUTRAL-SITE SCENE — With World Series games limited to about 11,000 mask-wearing fans each night, players for the Dodgers and Rays are just happy to have spectators at the home of the Texas Rangers. By Sports Writer Schuyler Dixon. SENT: 850 words, photos.

The NBA has moved closer to a deal ...

Catherine Zeta-Jones was already a ...