Individual whistles echo during quieter moments, and a single fan with enough persistence can leave an impression with a chant during World Series games with the smallest crowds in more than 100 years.

Because of the coronavirus, this year's Fall Classic is being held at a neutral site. A team from each coast is playing in Texas, drawing fans from Los Angeles and Tampa, Florida — along with curious Rangers supporters seeing the home squad's new retractable-roof stadium for the first time.

The roughly 11,000 mask-wearing fans each night — well, they're supposed to be wearing face coverings — are roughly 11,000 more than players saw in the stands during the regular season and all of the American League playoffs. So 40,518-seat Globe Life Field might as well be full as far as the Tampa Bay Rays are concerned. 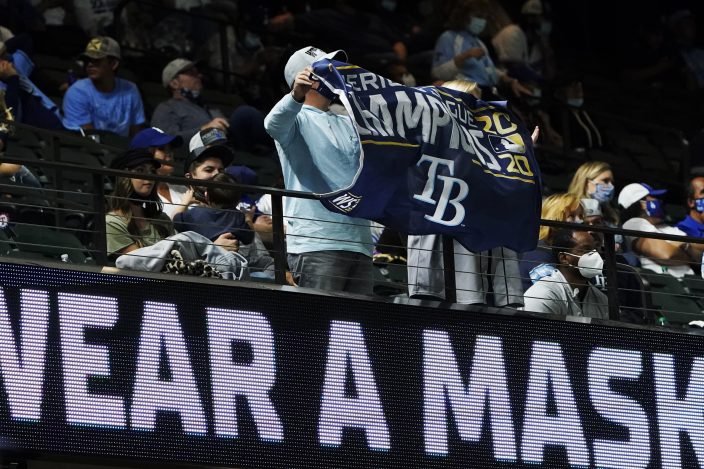 Tampa Bay Rays fans hold up a banner during the ninth inning in Game 5 of the baseball World Series against the Los Angeles Dodgers Sunday, Oct. 25, 2020, in Arlington, Texas. (AP PhotoTony Gutierrez)

“It certainly sounds like there’s 40,000 people in there,” manager Kevin Cash said. “Now, they might be 35,000 Dodger fans, which is OK. Any type of loudness and energy, that creates a lot in the dugout. That creates intensity. It’s loud and it’s been really refreshing to get to play with fans.”

To Cash's point, there has been plenty of Dodger blue visible for each of the 12 games with limited crowds since the start of the National League Championship Series two weeks ago. The 13th will be Game 6 of the World Series on Tuesday night, with Los Angeles in position to win its first title in 32 years.

That also means plenty of masks with the iconic interlocking LA logo since face coverings are required except when fans are “actively eating or drinking” — an activity apparently more loosely defined by some. 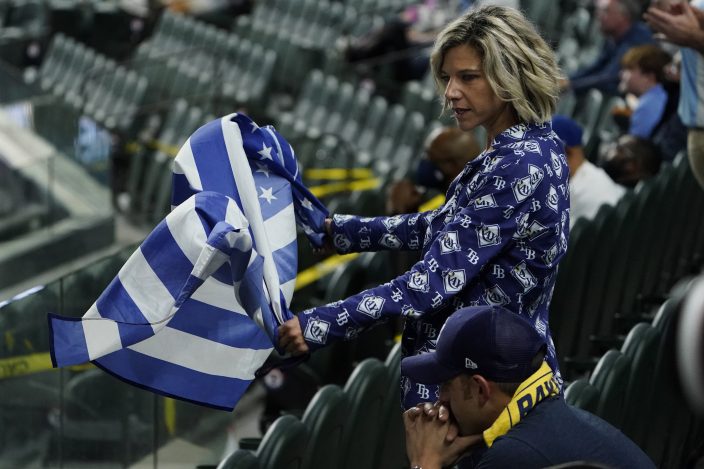 A Tampa Bay Rays fan watches during the ninth inning in Game 5 of the baseball World Series against the Los Angeles Dodgers Sunday, Oct. 25, 2020, in Arlington, Texas. (AP PhotoTony Gutierrez)

There's plenty of elbow room on the concourses, and fans in clusters of four are separated by at least one row above and below them. Mask compliance on the concourses is close to 100%, while in the seats about one in four can be seen either without a mask on, or with the covering pulled down around the neck.

Many of these fans, though, are used to being crammed into the corridors of, say, Dodger Stadium, in the postseason. 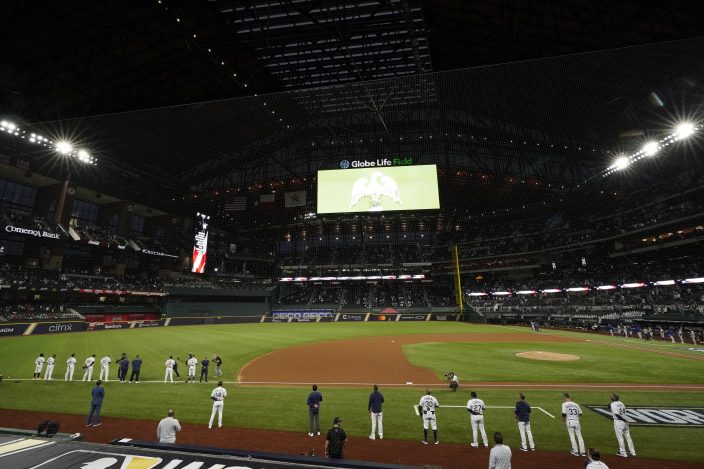 Members of the Tampa Bay Rays stand for the national anthem before Game 3 of the baseball World Series against the Los Angeles Dodgers Friday, Oct. 23, 2020, in Arlington, Texas. (AP PhotoTony Gutierrez)

Game 1's restricted total of 11,388 was the smallest Series crowd since 10,535 attended Game 6 in 1909 between the Tigers and Pittsburgh at Detroit’s Bennett Park, according to the Elias Sports Bureau.

It's the first World Series played entirely at one ballpark since 1944 between the Cardinals and Browns at Sportsman’s Park in St. Louis — and the fourth overall. The Yankees and Giants shared New York’s Polo Grounds in 1921 and 1922.

Jacob Ornelas grew up in the Dallas area before returning to his native El Paso. He still makes it back for Texas Rangers games, and would have been at Globe Life Field's first opening day had fans been allowed. 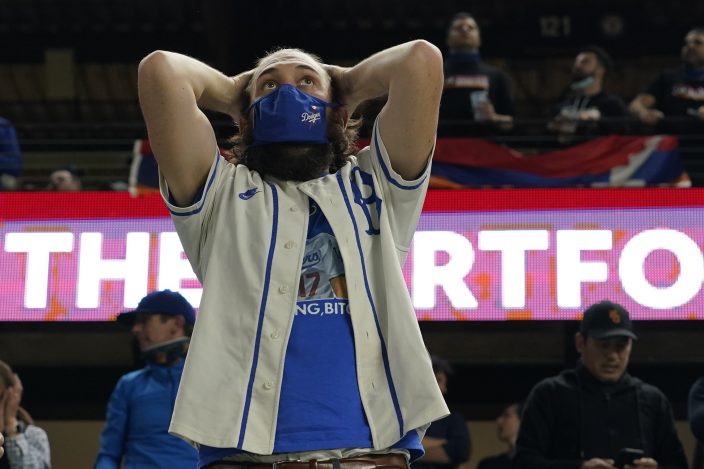 A fans watches during the sixth inning in Game 5 of the baseball World Series between the Los Angeles Dodgers and the Tampa Bay Rays Sunday, Oct. 25, 2020, in Arlington, Texas. (AP PhotoEric Gay)

Ornelas went to games at the original homes of the Rangers, since-demolished Arlington Stadium, and watched them in the World Series a decade ago at Globe Life Park. The open-air facility is still standing across the street from the new place.

He was standing in a concession line, trying to keep his social distance, on a concourse with large dots everywhere reminding people to stay 6 feet apart. Just like with the masks, some lines were compliant, others not so much.

“It takes away from the experience overall, but not my experience as far as being here the first time, being in a World Series,” Ornelas said. “It’s a World Series, not the regular season. The crowd, the noise.” 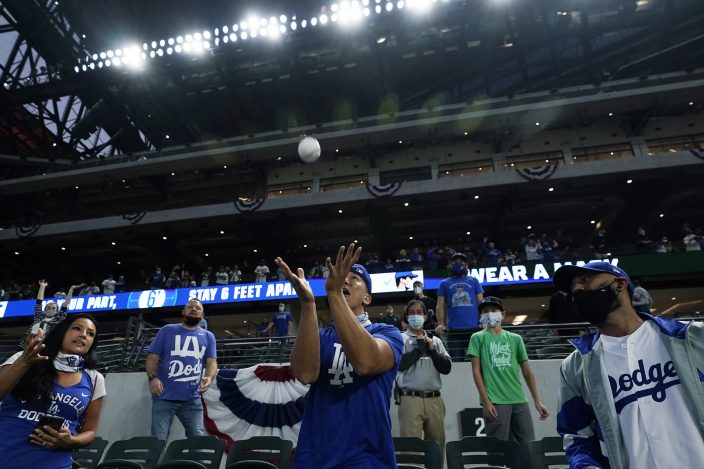 Los Angeles pitcher Tony Gonsolin said he noticed a stronger presence of Dodgers fans in the World Series compared to the NLCS, which might have to do with the Atlanta Braves having a strong national following themselves. LA beat Atlanta in Game 7 to advance.

The retractable roof has served a purpose as well. It was open for the first two games, when the temperature at first pitch was in the low 80s during a usually mild time of year in Texas.

It was about 30 degrees cooler for Game 3, so the roof was closed, then reopened with a game-time temperature of 57 for Game 4. A cold and rainy Sunday closed the roof again for Game 5.

It's almost certain to remain closed for Game 6, and, if necessary, Game 7. The final two nights in Texas will be classic fall weather straight out of New York, Boston or Philadelphia — temperatures in the 40s, with possible drizzle or light rain.

“Regardless of the limited amount (of fans), I think the stadium does still get loud, especially with the roof closed,” Tampa Bay outfielder Austin Meadows said. “It is nice to have that and kind of earn that, especially with this year going through so much and not having anybody in the stands. Getting to experience that here in the World Series is special.”

Thai leader faces court ruling that could cost him his ...

Thailand’s highest court is set to ...

The captain of a scuba diving boat ...