The wife of Supreme Court Justice Clarence Thomas is using her Facebook page to amplify unsubstantiated claims of corruption by Joe Biden.

Ginni Thomas, a longtime conservative activist, asked her more than 10,000 followers Monday to consider sharing a link focused on alleged corruption by the Democratic nominee for president and his son, Hunter, as well as claims that social media companies are censoring reports about the Bidens.

Other spouses of justices also have their own professional identities, but Thomas is the only one whose work involves partisan politics that sometimes butts up against her husband’s job. Clarence Thomas is the longest-serving current justice, having joined the court in 1991, and he administered the oath at the swearing in of new Justice Amy Coney Barrett on Monday evening. Barrett's confirmation following a rushed process to install her on the court before the election gives conservatives a 6-3 court majority. 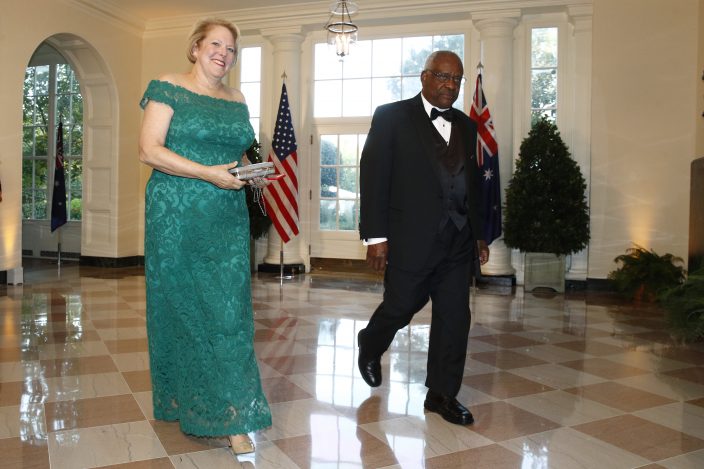 FILE - In this Sept. 20, 2019, file photo, Supreme Court Associate Justice Clarence Thomas, right, and wife Virginia "Ginni" Thomas arrive for a State Dinner with Australian Prime Minister Scott Morrison and President Donald Trump at the White House in Washington. Ginni Thomas is using her Facebook page to amplify unsubstantiated claims of corruption by Joe Biden. She is a longtime conservative activist who asked her more than 10,000 followers Oct. 26, 2020, to consider sharing a link focused on alleged corruption by Biden and his son, Hunter, as well as claims that social media companies are censoring reports about the Bidens. (AP PhotoPatrick Semansky, File)

Justice Thomas has never considered his wife’s political activism disqualifying. He has not stepped aside from any case involving Trump or current disputes over absentee-ballot extensions and other voting issues. A court spokeswoman did not respond to requests for Thomas to comment on this story.

Both Thomases were at the White House Monday for the ceremony. During the ceremony, Ginni Thomas sat, unmasked, next to Jesse Barrett, the new justice’s husband.

She wrote on Facebook Tuesday that she was “so excited” to be at Barrett's swearing in. “Clarence said as we left, I wish your Mom was still alive, which drew my tears, as she would be living each minute and emotion of this historic day...a day President Trump made possible!” Thomas wrote. 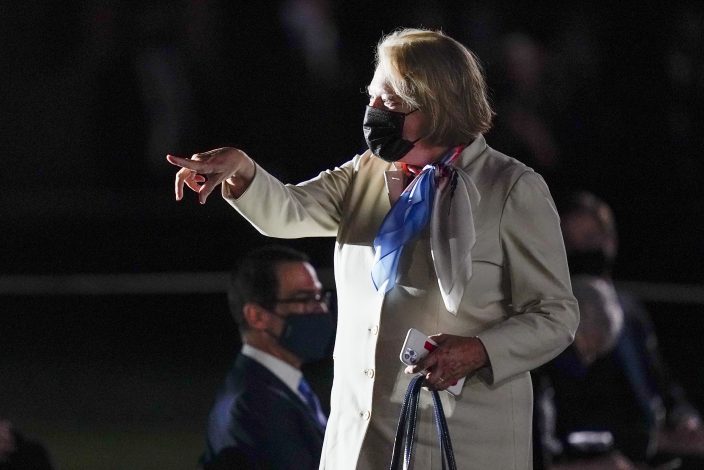 Virginia "Ginni" Thomas, wife of Supreme Court Justice Clarence Thomas, arrives to watch Amy Coney Barrett take the Constitutional Oath on the South Lawn of the White House in Washington, Monday, Oct. 26, 2020. Ginni Thomas is using her Facebook page to amplify unsubstantiated claims of corruption by Joe Biden. She is a longtime conservative activist who asked her more than 10,000 followers on Monday, to consider sharing a link focused on alleged corruption by Biden and his son, Hunter, as well as claims that social media companies are censoring reports about the Bidens. (AP PhotoPatrick Semansky)

The couple also attended a private ceremony at the court Tuesday, where all the attendees wore masks, according to court spokeswoman Kathy Arberg.

Ginni Thomas is an avid backer of President Donald Trump and an influential conservative activist who posts pictures of Trump supporters campaigning in Virginia. She also was a delegate to the Republican convention in Charlotte, North Carolina, this summer.

In a photo she posted in February, Thomas is seated next to Trump at a White House meeting in 2019. Other conservative leaders have called her “crucially important” and "an indispensable leader of the conservative movement. More than a dozen photos she posted online show her husband with Trump or Vice President Mike Pence.

Last week, she reposted a video that features Trump personal lawyer Rudy Giuliani and the headline, “The Biden Crime Family: How They Made Millions.”

Again asking people to share the link, Thomas wrote, “The mainstream media does not want people to know the facts of what this video reveal.”

On Oct. 12, she linked to a video by conservative commentator Dan Bongino asserting that Biden is suffering from dementia.

Three times in October, she wrote about what Trump and his supporters call Obamagate, an unsupported claim that former President Barack Obama broke the law by spying on Trump and his associates during the transition between their administrations.

On Oct. 10, she wrote, “More citizens should KNOW about the biggest scandal and the evidence now piling up! #ObamaGate.”

Two of her favorites targets are “the left” and “the media.” On Oct. 17, she posted a photo of a Black man identified as a conservative who was protesting outside Twitter headquarters in San Francisco. The photo shows the man with a bloodied mouth and teeth missing. She wrote, “Why is the left violent and why don’t Democrat’s condemn this?"

A few hours earlier, Thomas complained about apparent collusion between the media and the Biden campaign to shield the candidate from tough questions. “Media + Biden/Harris team = PROPAGANDA and Corruption. #WalkAwayFromDemocrats and the Mainstream Media! Find new news sources!" she wrote.

Thai leader faces court ruling that could cost him his ...

Thailand’s highest court is set to ...