The U.N. Security Council on Tuesday welcomed the permanent cease-fire agreement signed by the rival sides in Libya and called on the parties to implement it and “show the same determination in reaching a political solution.”

The U.N.’s most powerful body also welcomed Monday’s virtual meeting of the U.N.-recognized government and its eastern-based rivals in the Libyan Political Dialogue Forum and looked forward to an in-person meeting of the body that will hold political talks in Tunisia on Nov. 9.

Stephanie Williams, the acting U.N. envoy for Libya, announced at the end of military talks in Geneva with the rival parties on Friday that the cease-fire would start immediately and that all foreign fighters must leave the country within 90 days. She called it “a moment that will go down in history.” 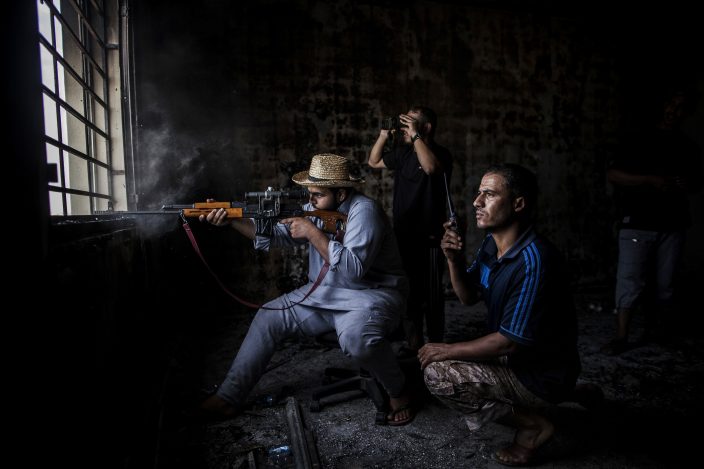 FILE - In this Sept. 21, 2016 file photo, a sniper from Misrata fires towards Islamic State militant positions in Sirte, Libya. The United Nations said Friday, Oct. 23, 2020, that the two sides in Libyan military talks had reached a "historic achievement" with a permanent cease-fire agreement across the war-torn North African country. (AP PhotoManu Brabo, File)

Libya descended into chaos after the 2011 uprising that toppled longtime autocrat Moammar Gadhafi and led to the oil-rich North African country becoming divided, with rival administrations in the east and west, each backed by fighters and militias -- and various foreign powers.

Hifter is supported by the United Arab Emirates, Russia, Jordan and Egypt, while the U.N.-supported government in Tripoli is backed by the wealthy Gulf state of Qatar and by Turkey, a bitter rival of Egypt and the UAE in a broader regional struggle over political Islam 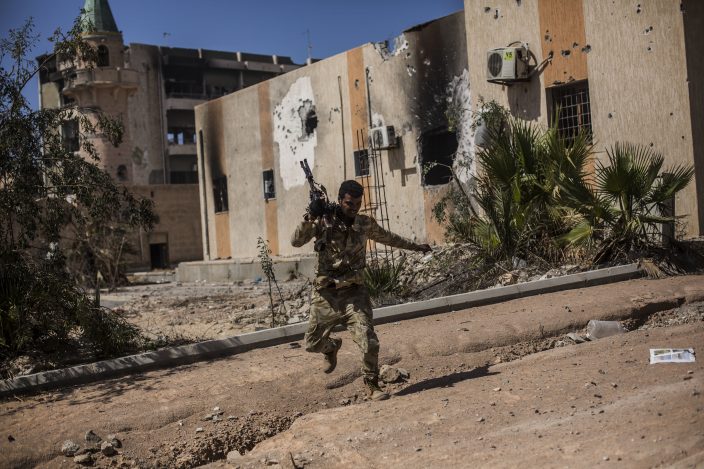 File - In this Thursday, Sept. 22, 2016 file photo, a fighter of the Libyan forces, affiliated to the Tripoli government, runs for cover while fighting against Islamic State positions in Sirte, Libya, The United Nations said , that the two sides in Libyan military talks had reached a "historic achievement" with a permanent cease-fire agreement across the war-torn North African country. (AP PhotoManu Brabo, File)

Thousands of foreign fighters, including Syrians, Sudanese and Chadians, have been brought to Libya by both sides, according to U.N. experts monitoring an arms embargo against Libya. The experts said in their latest report that 11 companies also violated the arms embargo, including the Wagner Group, a private Russian security company that the panel said in May provided between 800 and 1,200 mercenaries to Hifter.

In early October, U.N. Secretary-General Antonio Guterres urged world powers and others with interests in Libya’s long-running civil war to stop sending arms to its rival governments and keep working toward a lasting cease-fire, warning that the country’s very future was “at stake.”

The Security Council press statement on Tuesday recalled the resolution it adopted Sept. 15 demanding that all countries enforce the widely violated arms embargo and withdraw all mercenaries from Libya — and the commitment of the participants at the Berlin conference to comply with the arms embargo “and to refrain from intervening in the armed conflict or in the internal affairs of Libya.”

Council members called on all countries “to respect and support the implementation of the ceasefire agreement” and reaffirmed their strong commitment to “the sovereignty, independence, territorial integrity and national unity of Libya.”

Ahead of the cease-fire agreement, talks in Egypt and Morocco resulted in positive steps by the warring sides, including a preliminary deal aimed at guiding the country toward elections within 18 months and demilitarizing the contested city of Sirte. They also agreed to exchange prisoners and open up air and land transit across the country’s divided territory.

Following Friday’s cease-fire agreement, a commercial plane from Tripoli landed in the eastern city of Benghazi — the first in 18 months.