Jacksonville Jaguars coach Doug Marrone said Tuesday he plans to shake things up during the team’s bye week, which comes amid a six-game losing streak.

Marrone offered no details Tuesday, but he insisted repeatedly he was “fired up” to make sweeping changes.

Rookie Jake Luton, a sixth-round draft pick from Oregon State, at quarterback? Dynamic receiver Laviska Shenault in the veer option? Maybe the Emory & Henry? How about never punting or always going for 2? 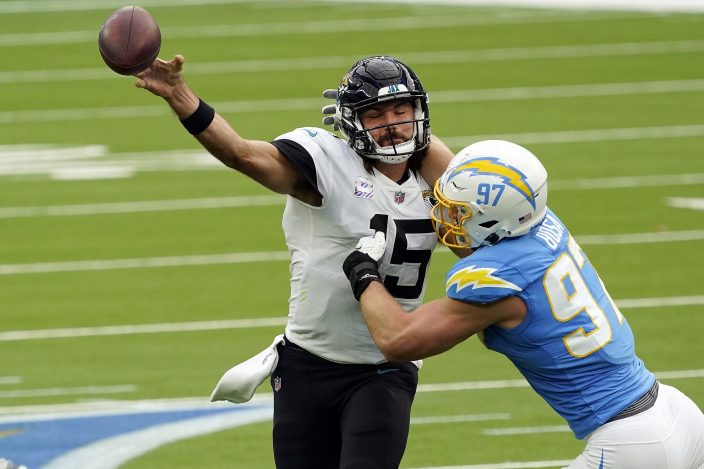 Marrone sure made it sound as if anything and everything is possible.

“I’m kind of fired up,” Marrone said. “And I know you guys are probably (thinking), ‘What the hell’s going on? How can this guy be fired up? They just lost six games in a row.’ And I understand that. I totally do, but I’m going to bust my (butt). I’m telling you now. 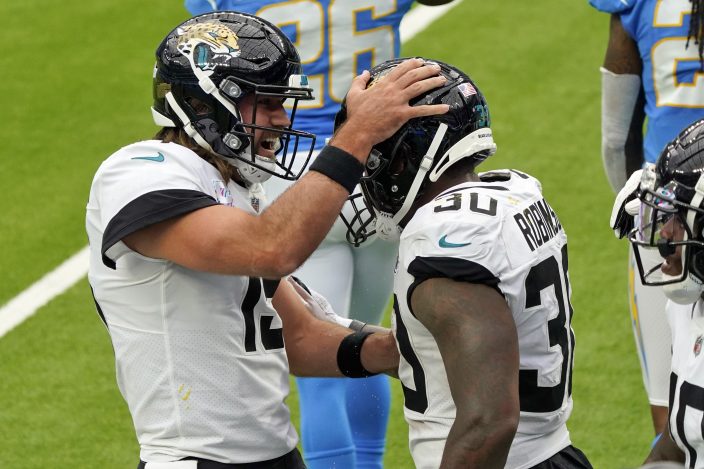 Jacksonville Jaguars running back James Robinson, right, celebrates with Gardner Minshew after lunging into the end zone for a touchdown during the first half of an NFL football game against the Los Angeles Chargers Sunday, Oct. 25, 2020, in Inglewood, Calif. (AP PhotoAlex Gallardo )

Marrone was just getting started with his rant, too.

“I’m sure people are going to mock me for that or say whatever the hell they want. But I really don’t give a (care). I’m fired up. I’m going to go after it and however it falls, it falls, but it’s open for me.

“I’ve done crazy (stuff) before. A lot of people don’t know. We changed an offense four or five days prior to the opening of our season in Syracuse my last year. We just went in a whole different direction and, (shoot), it worked out.”

Marrone pointed to dumping running back Leonard Fournette and taking a chance on undrafted rookie James Robinson from Illinois State just days before the opener. Robinson has been Jacksonville’s most consistent player this season.

No one would be surprised to see Marrone move away from second-year pro Gardner Minshew, who’s been off target with several throws in recent weeks and even prompted frustrating body language from Pro Bowl receiver DJ Chark.

Marrone has little to lose at this point. He’s 24-34 in three-plus seasons in Jacksonville, falling a few plays shy of the franchise’s first Super Bowl in 2017 and then miring mostly in mediocrity since. The Jaguars have dropped 12 of their past 15, including 10 by double digits.

The past month has been far from ideal. Miami, Cincinnati and Houston got their first wins of the season against the Jags in consecutive weeks. Detroit followed with a lopsided victory in Jacksonville, and then Los Angeles Chargers rookie quarterback Justin Herbert picked up his first win in five starts Sunday.

The Jaguars have done little right during their skid. They set franchise records by allowing at least 30 points in six consecutive games and by giving up a whopping 1,878 yards —the most in any four-game stretch — in losses to Cincinnati, Houston, Detroit and the Chargers.

Minshew had a season-low passer rating (70.5) two weeks ago against the Lions and tied a season low with 173 yards passing against the Chargers. Could it be the end of Minshew Mania in Jacksonville? Could Marrone make even more drastic moves before next week's home game against Houston?

“We have to take a look at how can we get these guys playing to a level where we can win games,” Marrone said. “I think that we have to get improvement in a lot of different areas and that’s why I say it’s on everybody. It’s easy to place the blame on one player, one position.

“But it’s our job to go ahead and do that and never use that as an excuse. So we’ll see where we are. I think that we’ll take a good look at it.”