Typhoon Molave roared closer to Vietnam with destructive force Wednesday, leaving one villager dead and causing two boats with 12 fishermen to sink as the country braced for the most powerful storm in 20 years, state media said.

A man died after winds of up to 150 kilometers (93 miles) per hour knocked him off his roof while trying to reinforce it in south-central Quang Ngai province, where the typhoon was forecast to make landfall later Wednesday, the official Vietnam News Agency reported.

The navy deployed two rescue boats to search for the fishermen in rough waters off Binh Dinh province, according to state-run VTV network. 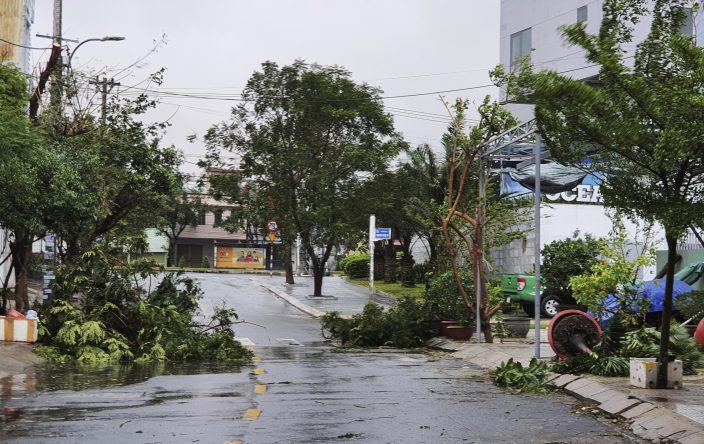 At least 40,000 people have been evacuated to emergency shelters farther inland from coastal villages. Prime Minister Nguyen Xuan Phuc has ordered provincial authorities to prepare to move up to 1.3 million people in regions lying on the typhoon’s path.

VTV showed displaced villagers huddled in classrooms that were converted into an evacuation center, where they spent the night.

Provincial authorities shut down offices, factories and schools and asked people to remain indoors to prevent casualties. Vietnam is still recovering from severe flooding and landslides that killed 136 people and left dozens missing in three provinces.

At least five airports were closed as the typhoon approached, with more than 200 flights canceled. Train services were also suspended Wednesday and will resume when the weather improves, the VTV network reported.

Molave is forecast to weaken when it slams into Vietnam, but is expected to retain its destructive wind force and drench still-flooded provinces with torrential rains in the northern fringes of central Vietnam.

The typhoon left at least nine people dead and displaced 120,000 in the Philippines before blowing toward Vietnam. Most of those who took shelter in evacuation camps have returned home as the weather cleared, leaving behind villagers whose houses were destroyed.