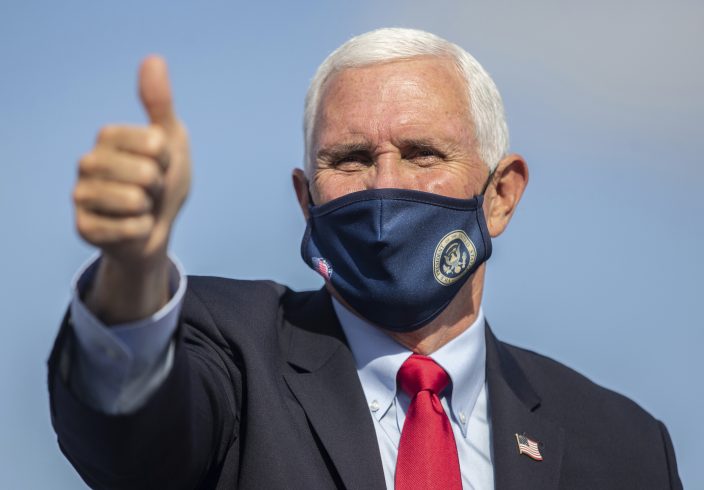 ANXIOUS VOTERS: Americans are worried about the Nov. 3 election, an anxiety many haven’t carried during years of largely peaceful displays of democracy. But Trump has refused to commit to a peaceful transfer of power and called for an army of “poll watchers” to monitor the vote. That’s part of what fuels concern that this year could be different. Elections officials and voting advocates are on high alert.

LOOKING WEST: Trump is campaigning in Arizona and will stage a rally in a town just across the Colorado River from Nevada. Trump narrowly lost Nevada in 2016 and is looking to deny Biden, whose campaign has for months eyed once reliably red Arizona as a prime candidate to flip to blue. Harris will campaign in Arizona a day after making multiple Nevada stops. Both campaigns are trying to project that they are on offense and have the momentum as Election Day looms.

BY THE NUMBERS: The Trump campaign has a bold theory for how the Republican president could win reelection: It can tap a universe of millions of supporters who did not vote for him in 2016 but could this time. This strategy will be tested in Pennsylvania, a critical state that Trump carried by only 44,292 votes out of 6.1 million cast in 2016. A Democratic surge of votes in cities and suburbs could quickly erase that narrow lead. To hold onto Pennsylvania’s 20 electoral votes, the president needs to prove that a hidden groundswell of supporters exists — and will vote.

MINNESOTA BALLOTS: Republicans who oppose Minnesota’s weeklong extension for counting absentee ballots beyond Election Day say that unless it is blocked, thousands of people whose ballots arrive after Nov. 3 will risk having their votes disqualified. But attorneys for the Democratic secretary of state argue that it’s too close to Nov. 3 to make changes. Nearly 2 million voters who requested absentee ballots have already been told their ballots would count if they were postmarked by next Tuesday.

QUOTABLE: “This place, Warm Springs, is a reminder that though broken, each of us can be healed. That as a people and a country, we can overcome a devastating virus. That we can heal a suffering world. That, yes, we can restore our soul and save our country.” — Biden in the Georgia city where Franklin Delano Roosevelt sought treatment for polio while governing a nation weathering the Great Depression and World War II.

Stop the music! Chorus of artists tell Trump to tune it down