Japanese Prime Minister Yoshihide Suga said Wednesday that his government is working on the final details of a plan to release massive amounts of radioactive water being stored at the wrecked Fukushima nuclear plant, a decision that has been delayed by protests.

More than nine years after the disaster, the government still hasn't made clear what it will do with the water at the plant, though a release into the ocean has been largely speculated on in recent years.

“We cannot put off our decision forever without making a plan," Suga told a parliamentary session Wednesday, saying the plant is running out of storage space. “Based on discussions and expertise we've had, we will further deepen our discussion and responsibly make a decision at an appropriate time.” 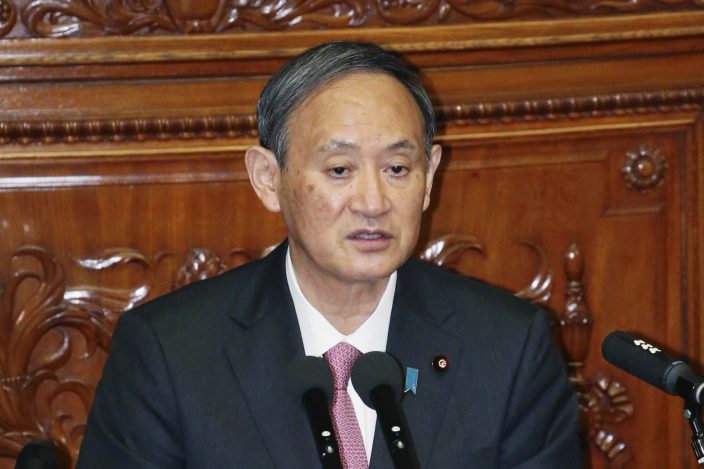 Japanese Prime Minister Yoshihide Suga speaks during a parliamentary session in Tokyo on Wednesday, Oct. 28, 2020. Suga said Wednesday that his government is carefully working on final details on a release of the massive amount of treated but still radioactive water from the wrecked Fukushima nuclear plant, after a speculated decision of a release to the sea by the end of October has triggered fierce protests from fishermen around the country. (Toshiyuki MatsumotoKyodo News via AP)

A government panel in February issued a report recommending releasing the water into the ocean as the most realistic plan. The government and the plant operator, Tokyo Electric Power Co., or TEPCO, say all radioactive materials but tritium can be safely removed, and that tritium is largely harmless.

The plant now has more than 1.2 million tons of the water stored in 1,000 huge tanks that occupy a large amount of space at the plant. TEPCO says that it will run out of space in the summer of 2022 and that the tanks hamper the decommissioning process.

Suga did not give a timeline, though a decision is expected in weeks, if not months. An actual release would be about two years away because TEPCO still has to set up a facility for a release and have it authorized by the Nuclear Regulation Authority, officials said. A controlled release of the water will take decades.

The plant suffered a triple meltdown in the March 2011 earthquake and tsunami and is undergoing decades-long decommissioning. The contaminated water, a mixture of injected cooling water and groundwater that flows into the reactor area, has accumulated since the accident.

The government and TEPCO say water treatment systems can remove all but water-soluble tritium, though currently 70% of the water contains other radioactive materials exceeding allowable limits. TEPCO says it can meet the safety standard by running the water for a second round of treatment before releasing it.

Suga visited the Fukushima plant last month and said he hoped to make a decision as soon as possible.

On Wednesday, Japanese officials from the foreign and industry ministries provided an online session for foreign diplomats to provide updates on the water situation.

Nuclear officials inside and outside of Japan have said a controlled release of the water into the ocean is the only realistic way of getting rid of the water safely.

Nuclear Regulation Authority chairman Toyoshi Fuketa recently said that tritium below allowable limits is routinely released from nuclear plants around the world. He said he is not concerned about safety, but understands psychological and reputational concerns about the water associated with the Fukushima disaster. He said careful monitoring of the water samples is crucial to gain public understanding.

But some scientists say the long-term environmental impact from radioactive water is unknown and could pose higher risks than explained. Ken Buesseler, a marine biologist at the Woods Hole Oceanographic Institution, said in a recent article that not only tritium but how other isotopes affect marine life should be carefully examined.