Greek military jets and helicopters performed flybys over the capital and other cities, towns and islands Wednesday to mark Greece’s national holiday while traditional military and student parades were canceled due to the coronavirus pandemic.

Known as Ohi Day, or “No Day,” the Oct. 28 holiday commemorates the day in 1940 when Greece rejected an ultimatum from fascist Italy to allow Axis troops to enter the country and occupy strategic locations. The refusal marked Greece's entry into World War II on the Allied side.

Greece has reported a rise in confirmed coronavirus cases and deaths in recent weeks, with a record 1,259 new cases and 12 new deaths announced Tuesday. The country's total number of confirmed cases stands at just over 32,700, with 593 deaths in this country of around 11 million people. 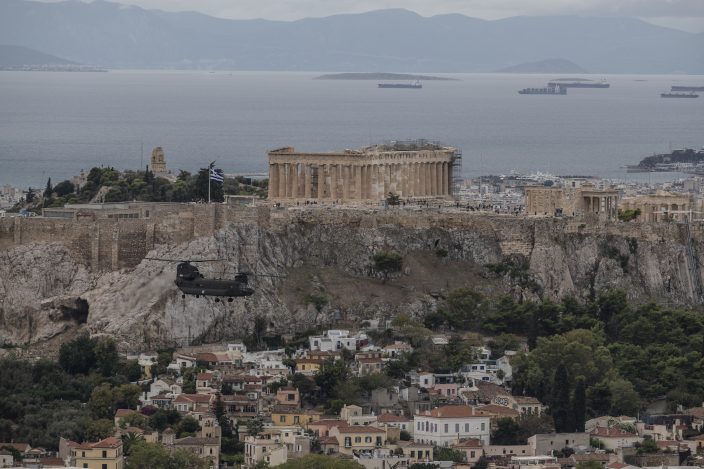 A military helicopter flies in front of the Parthenon temple on the ancient Acropolis hill in Athens, Wednesday Oct. 28, 2020 during a national holiday . Helicopters fly next to Acropolis hill to celebrate Greece's refusal to align itself with a belligerent fascist Italy in 1940 and instead fight a much stronger opponent, a decision which dragged it into World War II and eventually led to a brutal occupation by Nazi Germany. (AP Photo Petros Giannakouris)

In his address for the national holiday, Prime Minister Kyriakos Mitsotakis appealed to Greeks to show the same unity and solidarity they did in 1940.

“Today, our country is facing different challenges than those it faced 80 years earlier,” Mitsotakis said. “But we must marshal the same virtues that made Greece then too: national unity, a high mindset, the sense of solidarity.”

In the northern Greek city of Thessaloniki, authorities intervened after about 50 people attempted to hold a march to commemorate Oct. 28 despite the current restrictions on gatherings due to the pandemic. 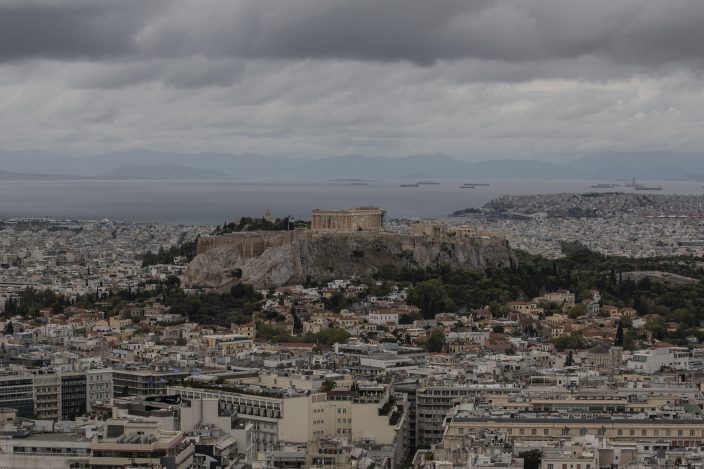 The ancient Acropolis hill with a 500 BC Parthenon temple in the city of Athens, during a rainy day on Wednesday, Oct. 28, 2020. (AP Photo Petros Giannakouris)

Emergency lockdown restrictions have been imposed on four regions in Greece with coronavirus outbreaks. Lighter restrictions are in force in many other areas, including in Athens and Thessaloniki, where wearing facemasks is mandatory outdoors, gatherings are restricted to nine people and a night-time curfew runs from 12:30 a.m. until 5 a.m.

The baby was born on the run from ...