All politicians have opponents, but Boris Johnson’s list is exceptional.

Less than a year after winning a landslide election victory, Johnson is facing multiple crises with few political friends. 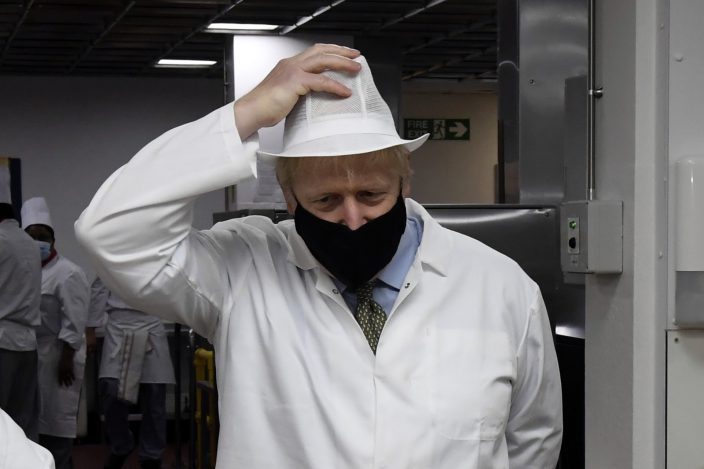 “The Johnson government, over the last 10 months, have been spectacular at managing to score own-goals and managing to pick fights with people that were really unnecessary,” said Victoria Honeyman, associate professor of British politics at the University of Leeds. “They don’t seem to be able to pick a winner in a one-horse race.”

It’s a stark change from December 2019, when Johnson won a commanding House of Commons majority with bold, simple election promises. He would “get Brexit done” after years of uncertainty following the U.K.’s 2016 vote to leave the EU. And he would “level up” the country, redistributing wealth and opportunity to left-behind regions of northern England.

The coronavirus swept away those best-laid plans. 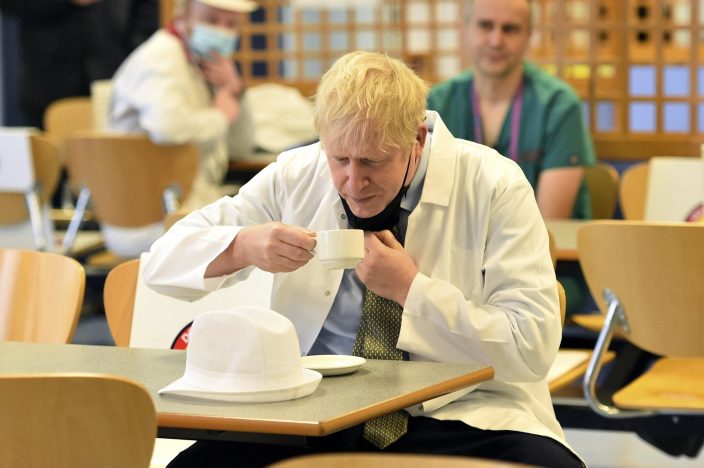 Britain's Prime Minister Boris Johnson drinks tea in the canteen during a visit to Royal Berkshire Hospital, Reading, England, Monday Oct. 26, 2020, to mark the publication of a new review into hospital food. (Jeremy SelwynPool via AP)

The U.K. has recorded more than 45,000 COVID-19 deaths, the highest toll in Europe. Johnson himself spent a week in hospital with the virus in April, some of it on oxygen in intensive care.

Critics say Johnson’s Conservative government was too slow to lock down the country, too quick to ease restrictions, unclear in its messaging and tardy in setting up a test-and-trace system to isolate infected individuals.

Now — as in other European countries — infections and deaths are soaring again. 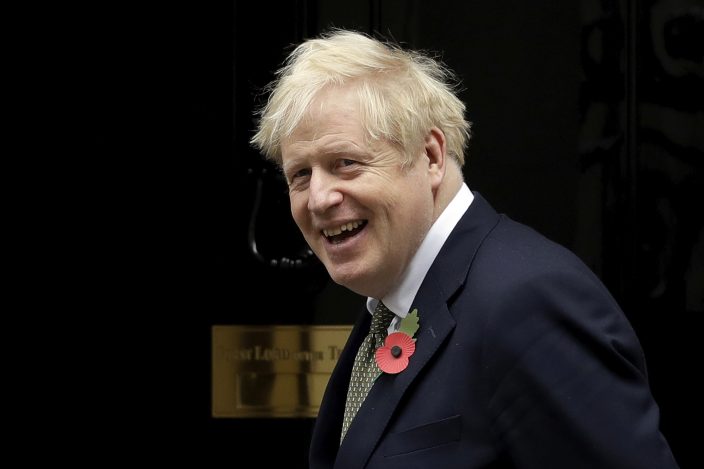 FILE - In this Friday, Oct. 23, 2020 file photo, British Prime Minister Boris Johnson turns to walk back inside as he finishes posing for photographs with members of the British military to mark the launch of the annual Royal British Legion Poppy appeal outside 10 Downing Street, in London. Pediatricians are urging the British government to reverse course and provide free meals for poor children during school holidays as the COVID-19 pandemic pushes more families into poverty. (AP PhotoMatt Dunham, File)

The government has responded by imposing a three-tier system of local restrictions in England, based on infection rates. The toughest measures, which have shut pubs and hamstrung many other businesses, have fallen on the already economically battered north.

That has pitted Johnson against mayors in Manchester and Liverpool, who say their cities are being locked down without adequate financial support or prior consultation. 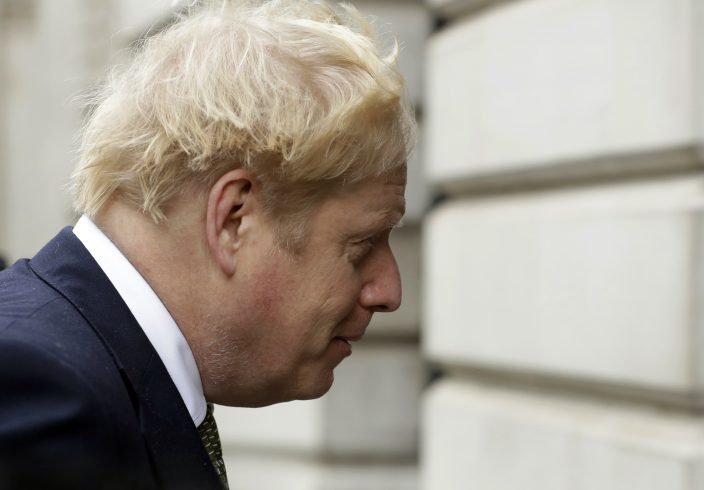 British Prime Minister Boris Johnson walks from 10 Downing Street to a meeting with his ministers at the Foreign Office, in London, Friday, Oct. 23, 2020. (AP PhotoMatt Dunham)

The north-south rift has energized the opposition Labour Party, to which Burnham belongs. It has also alarmed Conservative lawmakers from formerly Labour-held northern seats that were won by the Tories last year largely as a result of Johnson’s promises to revive the north.

This week northern Tories united as the Northern Research Group to pressure the government.

“Our constituents have been some of the hardest hit by this virus, with many losing jobs, businesses, and livelihoods,” said group leader Jake Berry, demanding a road-map out of coronavirus restrictions and a jobs plan for the north.

On top of it all, Johnson has picked a fight with Marcus Rashford, the 22-year-old Manchester United star who is leading a campaign to ensure poor children are fed during the school holidays.

Rashford’s campaign, which has drawn on his own experience of childhood food poverty, has struck a chord, with businesses, charities and local authorities all offering food. But the government has refused to fund free school meals over the current half-term break or December's Christmas holidays.

That intransigence has mystified many observers. Even supportive lawmakers say Johnson’s government needs to show it cares about issues that matter to millions of people.

“I do feel for the government,” said Conservative legislator Robert Halfon, who heads the House of Commons education committee and supports the free meals campaign. “We’re in a state of national emergency. Everything seems to be about the economy and health care — understandably.

“But of course social issues like this … and the struggles that people face and the cost of living, these things will have to be grappled with as we come out of it,” he told the AP. “Millions of kids haven’t been learning, 32% of families have had a drop in income.”

Johnson supporters say the prime minister faces an immense challenge as he tries to chart a course between what he calls “the Scylla of another national lockdown and the Charybdis of an uncontrolled virus,” a reference to sea monsters from Greek mythology.

He's caught between scientific advisers arguing for a tougher lockdown to prevent coronavirus deaths, and many Conservatives who say restrictions are smothering the economy, stifling individual freedom and taking a toll on people’s physical and mental health.

Countering claims that it is miserly, the government points out that it has spent billions supporting businesses and workers during the outbreak, including paying the wages of 10 million furloughed employees.

But critics say Johnson is weak on detail, relies too much on a handful of advisers — especially self-styled political disruptor Dominic Cummings — and has depleted the government talent pool by jettisoning all politicians who disagreed with him about Brexit.

Relief does not appear to be in sight. A long winter of restrictions lies ahead as Britain battles a resurgent coronavirus. On Jan. 1, the country will leave the EU’s economic embrace in the final stage of Brexit, and it’s unclear whether it will have a trade deal with the bloc to cushion the blow. U.K.-EU negotiations are in their fraught final weeks, in an atmosphere of mutual mistrust.

Next week’s U.S. election could bring more headaches. Victory for Democrat Joe Biden would bring an American administration wary of Johnson’s populist instincts and in no rush to give Britain a sought-after free trade deal — though it might also make trans-Atlantic relations more stable than under the unpredictable Donald Trump.

With all the tumult, Honeyman said “it’s difficult at this point to see how the Conservatives with Johnson as their prime minister are going to get through the next four years” until the next scheduled election.

“It’s extraordinary,” she said. “It’s 10 months on from a general election and they’re on their knees.”