Greek authorities on Wednesday arrested the captain of a Portuguese-flagged cargo ship that collided with a Greek navy minehunter outside the country’s main port of Piraeus.

The coast guard said the captain of the Maersk Launceston container vessel was arrested for alleged violations of the Greek penal code and of the International Regulations for the Prevention of Collisions at Sea.

The Kallisto, a British-built vessel capable of sweeping and hunting mines, was cut in two in Tuesday’s collision, with much of its stern severed. 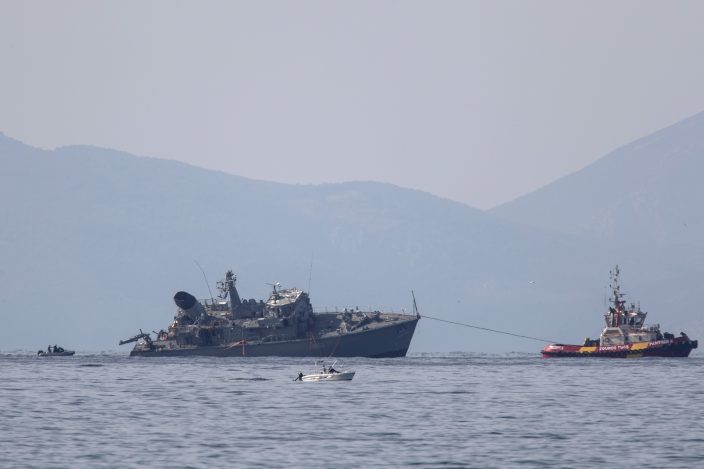 Α damaged navy minesweeper is being towed near the port of Piraeus, Greece, on Tuesday, Oct. 27, 2020. Greece's coast guard says a Greek navy minesweeper and a Portuguese-flagged cargo ship have collided outside the country's main port of Piraeus, leaving two navy crew slightly injured and prompting the evacuation of the military vessel. (AP PhotoPetros Giannakouris)

Two of the 27 crew members on board were taken to a hospital with slight injuries. The rest were evacuated from the ship, which was towed to a nearby navy base.

No damage was reported to the Maersk Launceston, which is managed by the Germany-based company John T. Essberger, and no injuries were reported among the ship's 22 crew members.

In a statement Wednesday, the company said Greek authorities interviewed the cargo ship’s crew and have officially charged the ship’s captain. Greek authorities requested for the ship to remain in port, and a company representative was providing support to the ship’s master and crew.

“The exact details of the incident which took place early on Tuesday, October 27 are yet unclear. Greek authorities are continuing their investigations, to which John T. Essberger will offer its full cooperation,” the company said in its statement. “Managers again would like to express their concern over the injuries of the crew of Kallisto, wishing them a speedy recovery.”

The container vessel had been heading from Piraeus to the Turkish port of Canakkale when the collision occurred.