An alarming surge in coronavirus cases in Europe and the U.S. is wiping out months of progress against the scourge on two continents, prompting new business restrictions, raising the threat of another round of large-scale lockdowns and sending a shudder through financial markets.

“We are deep in the second wave,” European Commission President Ursula von der Leyen said Wednesday. “I think that this year’s Christmas will be a different Christmas.”

French President Emmanuel Macron was set to give a televised address as many French doctors urged another nationwide lockdown, with 58% of the country’s intensive care units now occupied by COVID-19 patients. Chancellor Angela Merkel pressed for a partial lockdown in Germany. 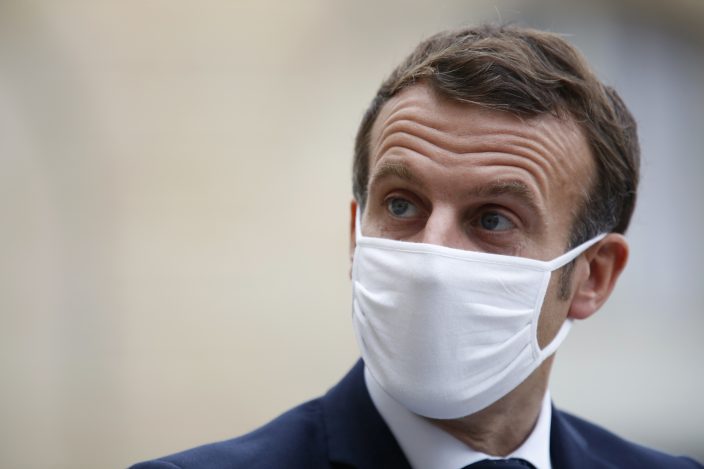 In the U.S., where practically every state is seeing a rise in cases, Illinois Gov. J.B. Pritzker banned indoor dining and drinking in Chicago and limited the number of people gathering in one place.

“We can’t ignore what is happening around us, because without action, this could look worse than anything we saw in the spring,” he said.

Stocks around the world tumbled on worries that fresh lockdowns and rollbacks of business will further drag down economies. 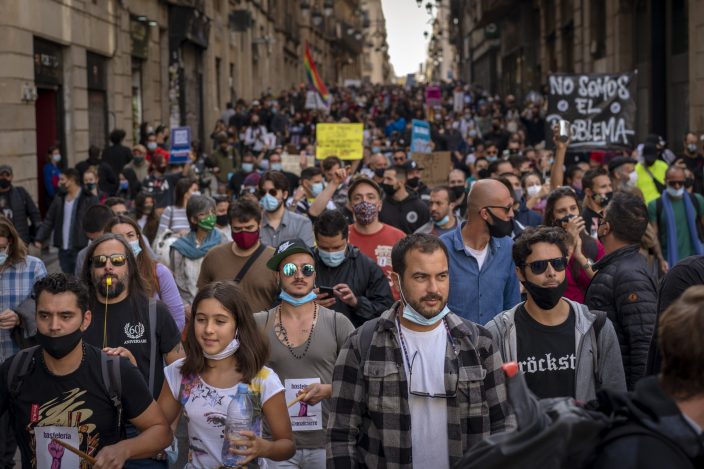 Workers of several sectors including restaurants, bars, hotel, taxi, and nightclubs march during a protest against the latest virus restrictions in Barcelona, Spain, Wednesday, Oct. 28, 2020. Since Oct. 14 bars and restaurants have been closed, allowed to serve food and drink for take-away and delivery only. On Sunday a curfew from 10p.m. to 6 a.m. was imposed. Still, virus cases are surging and Catalan authorities are now considering even more restrictions including weekend lockdowns. Banner reads in Spanish "we want to work". (AP PhotoEmilio Morenatti)

The S&P 500, Dow Jones Industrial Average and the Nasdaq composite were all down in morning trading on Wall Street. Markets were dropping even more sharply in Europe, in anticipation of lockdowns in France and Germany.

The virus is blamed for more than 250,000 deaths in Europe and about 227,000 in the U.S., according to the count kept by Johns Hopkins University.

More than 2 million new confirmed coronavirus cases have been reported globally in the past week, the World Health Organization said. That is the shortest time ever for such an increase. Forty-six percent of the new cases were reported in Europe.

Nursing staff in protective equipment cares for a corona patient in a hospital in Essen, Germany, Wednesday, Oct. 28, 2020. People with a new coronavirus infection are treated in the intensive care unit IT2 in the Operative Centre II of the University Hospital Essen. (Fabian Strauchdpa via AP)

“We’re dealing with the coronavirus — the virus itself — and also corona fatigue,” she said. “That is, people are becoming more and more fed up with the preventive measures.”

Deaths are also on the rise in Europe, with about a 35% spike from the previous week, the WHO said.

Belgium, the Netherlands, most of Spain and the Czech Republic are seeing similarly high rates of infection.

In Germany, where cases have not risen as quickly as elsewhere in Europe, Merkel urged governors of the country’s 16 states to quickly agree a partial lockdown that could include further restrictions on public gatherings and the closing of bars and restaurants.

The plan has caused anguish in Germany’s hospitality industry, with thousands of owners staging a protest at Berlin’s Brandenburg Gate to demand more financial support from the government.

“A national lockdown, as we have seen in, ravages an economy and would add significant complications to the ongoing economic recovery,” said Fiona Cincotta, an analyst at online trading firm GAIN Capital.

But Thomas Gitzel, chief economist at Liechtenstein’s VP Bank Group, said a temporary lockdown could be less harmful than a prolonged slump in consumer spending from persistently high infection levels.

“One doesn’t need to be a virologist to conclude that, without further restrictions, the number of new daily infections will likely rise,” said Gitzel, adding that a short, strict lockdown could be effective. “The strict containment measures in March and April laid the ground for an economically successful summer.”

Even Sweden, which avoided a national lockdown and generally imposed far lighter measures than other European countries, is now urging people to avoid shopping centers and shops and stay away from public transportation.

Associated Press writers from across the globe contributed to this report.