If it didn’t actually exist, “Holidate” would sound like one of those fake movies within a movie. A couple of attractive singles decide on a low-stakes, no-commitment arrangement to be each other’s dates on holidays? It’s a perfect rom-com concept in that it’s equal parts ridiculous and shamefully appealing. Slot in some very pretty people (Emma Roberts and Luke Bracey), a drunken aunt (Kristen Chenoweth) some bawdy dialogue and a picturesque and unbelievably warm Chicago where it’s possible to wear spaghetti straps at Easter and it practically makes itself. Unfortunately, like so many that have come before, it’s pretty terrible too (and that’s taking into account the rom-com curve).

“Holidate,” available now on Netflix, is one of those extremely self-aware and cynical romantic comedies where the lead characters are neither romantics nor even particularly likeable. This garbage person love story can work under the right circumstances (see: “You’re The Worst”), but that usually takes a sharp script to execute. This script by Tiffany Paulson, with insights like “chicks go mental at the holidays” and comedic asides along the lines of “excuse me, Crocodile Dundee,” is not that. And simply being aware of rom-com cliches and having your characters discuss them is getting a little tired.

Roberts’ Sloane is a chain-smoking, candy-scarfing waif who is meant to look slouchy and unkempt but always just looks like a gorgeous woman with perfect makeup who is simply wearing a hoodie. She had a bad breakup six months ago and now her little brother is engaged to a repressed stereotype and her mother (Frances Fisher) won’t stop pestering her about men and marriage. Bracey’s Jackson, meanwhile, is a handsome Australian golf pro who just wants to sleep his way through the Windy City but also not be alone on holidays. 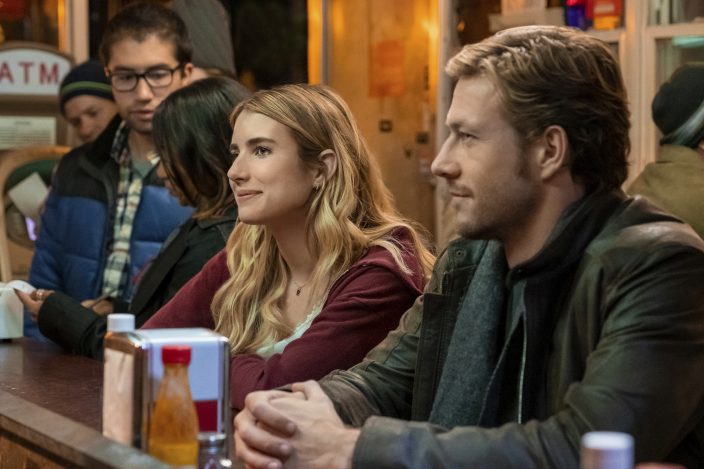 This image released by Netflix shows Emma Roberts and Luke Bracey, right, in a scene from "Holidate." (Steve DietlNetflix via AP)

The “holidate” concept comes from Sloane’s Aunt Susan (Chenoweth, giving a terrible role her all and not earning any laughs in the process) who brought a mall Santa home and seems happy with her life. When Sloane meets Jackson in the returns line where they compare their terrible Christmases, they decide to give it a shot for New Year’s.

Sloane and Jackson keep up the arrangement for the year, accompanying one another to Easter, St. Patrick’s Day (it is Chicago), the Fourth of July and so on, denying their burgeoning feelings for one another as they go. It wasn’t a promising sign that I started checking my watch around Mother’s Day, and the antics only get more absurd and exhausting. That director John Whitesell was able to stretch this out for more than 90 minutes is pretty incredible and he uses everything in his arsenal from a hospital visit to a cheating subplot with a minor character to fill the time.

The best thing that “Holidate” has going for it is that Roberts and Bracey do have great chemistry, but they just don’t have a story or a script that can do it justice.

Roberts remains somewhat of a mystery as an actress. She has obvious charisma and talent that under the right circumstances can shine (see: “Nerve” and “Palo Alto”) but she also seems to end up with an unfair share of duds like this and “Little Italy.”

If you want a raunchy will-they-won’t-they rom-com in which two attractive people try to keep their relationship platonic, I’d suggest avoiding “Holidate” and watching Lesley Headland’s “Sleeping With Other People” instead.

“Holidate,” a Netflix release, is rated TV-MA. Running time: 103 minutes. One and a half stars out of four.

After opting out of bubble, Bradley ready to play again