Authorities lifted some evacuation orders Tuesday as winds began subsiding and containment was increased for the massive wildfires in brushy hills above cities in Orange County. More residents were expected to receive permission to return to their homes on Wednesday.

“With favorable weather, fire crews will find opportunities to establish more control lines,” the California Department of Forestry and Fire Protection, or Cal Fire, said in a statement. 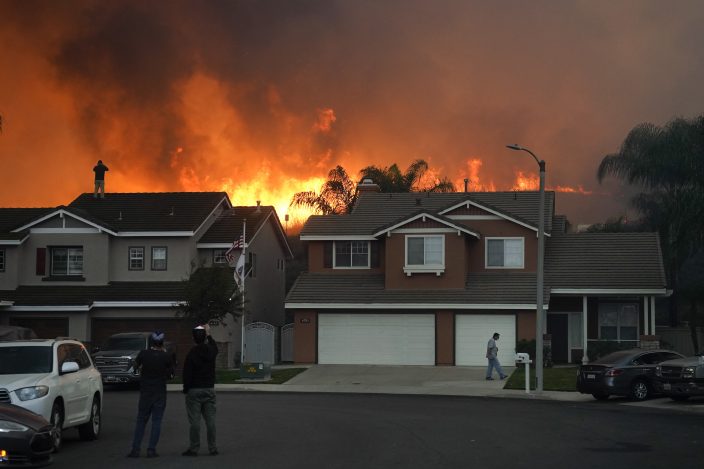 The Silverado Fire burned 21 square miles (54 square km) and was 25% contained on Wednesday. No homes were destroyed but 70,000 remained threatened by the blaze, which broke out in gusty weather around dawn Monday near Irvine, a city of 280,000 about 35 miles (56 kilometers) south of Los Angeles.

That fire and the Blue Ridge Fire just to the north, which broke out several hours later near the city of Yorba Linda, sent tens of thousands of residents fleeing densely populated neighborhoods. Seven structures were damaged and one destroyed by the Blue Ridge Fire, which charred a similar-sized area by Wednesday. 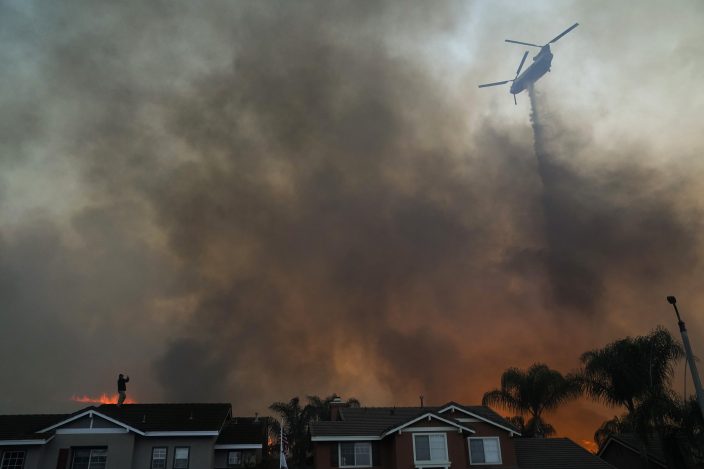 Scientists have said climate change has made California much drier, meaning trees and other plants are more flammable. October and November are traditionally the worst months for fires, but already this year 8,600 wildfires in the state have scorched a record 6,400 square miles (16,600 square kilometers) and destroyed about 9,200 homes, businesses and other buildings. There have been 31 deaths.

At one point, winds were so fierce that gusts blew over tractor-trailers and grounded firefighting aircraft. They subsided Tuesday night and calmer winds were expected the rest of the week, the National Weather Service said. But continued warm and dry weather that make for potentially dangerous wildfire conditions were forecast into November, with no rain.

The Southern California Edison utility reported to state officials that it was investigating whether its equipment might have sparked the Silverado Fire. According to Edison’s report to utility regulators, a “lashing wire” that ties a telecommunications line to a supporting cable may have come into contact with a separate 12,000-volt conductor line above it. 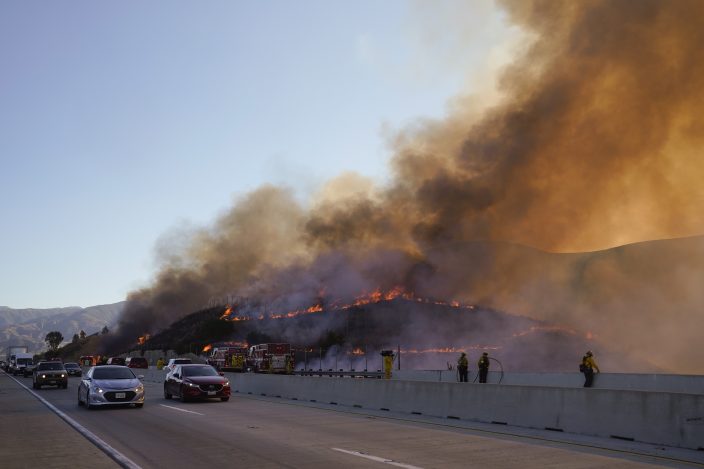 The Blue Ridge Fire burns next to California 71 on Tuesday, Oct. 27, 2020, in Chino Hills, Calif. Crews tried to beat back two out-of-control wildfires in Southern California that have kept tens of thousands of people out of their homes even as another round of dangerous fire weather raises the risk for flames erupting across the state. (AP PhotoJae C. Hong)

Edison defended its decision not to institute a blackout in the area. Spokesman Chris Abel said wind speeds in the mountains above the city of Irvine on Monday morning did not initially reach the threshold to cut power, though they did later in the morning and some electric circuits were cut.

On Wednesday, about 1,900 of Edison’s 5 million customers were without power in four Southern California counties, according to the utility.

With Modjeska Peak and Santiago Peak as a backdrop, the Silverado Fire continues to burn in the canyons east of the city of Irvine, Calif., before dawn on Tuesday, Oct. 27, 2020, in this view looking east from Tustin, Calif. (Mark RightmireThe Orange County Register via AP)

In Northern California, power had been restored by Wednesday to the vast majority of residents, with the remaining 10,000 expecting to see it restored soon.

In Shasta County, authorities arrested two men earlier in the week for allegedly starting several small fires in separate incidents. The fires were quickly contained. One of the men was accused of setting fire to a car during a domestic dispute that spread to nearby vegetation, while another was accused of trying to start three small fires.